Where is Scottish Gaelic spoken?

Are there communities where only Scottish Gaelic is spoken?

Many elderly native speakers are more comfortable speaking Gaelic than they are English. Wee Gaels who speak Gaelic as a mother tongue are also likely to be monolingual until school age. That said, there isn't a community left where English hasn't reached. Almost all Gaels are bilingual with English to varying degrees. Once you leave the traditional Gaidhealtachd (including Cape Breton, Nova Scotia), you depend on English to survive. The above said, the situation is gradually improving now that Gaelic is no longer a suppressed language. There's Gaelic medium education, the presence of Gaelic in Scottish Parliament, Gaelic on TV and on the radio. 20 or 30 years go this was virutally unheard of. Stretch back even further, you got the crap beaten out of you in school, both in Scotland and Canada, for speaking Gaelic. A lot of harm as been inflicted on native speakers' confidence because of that... 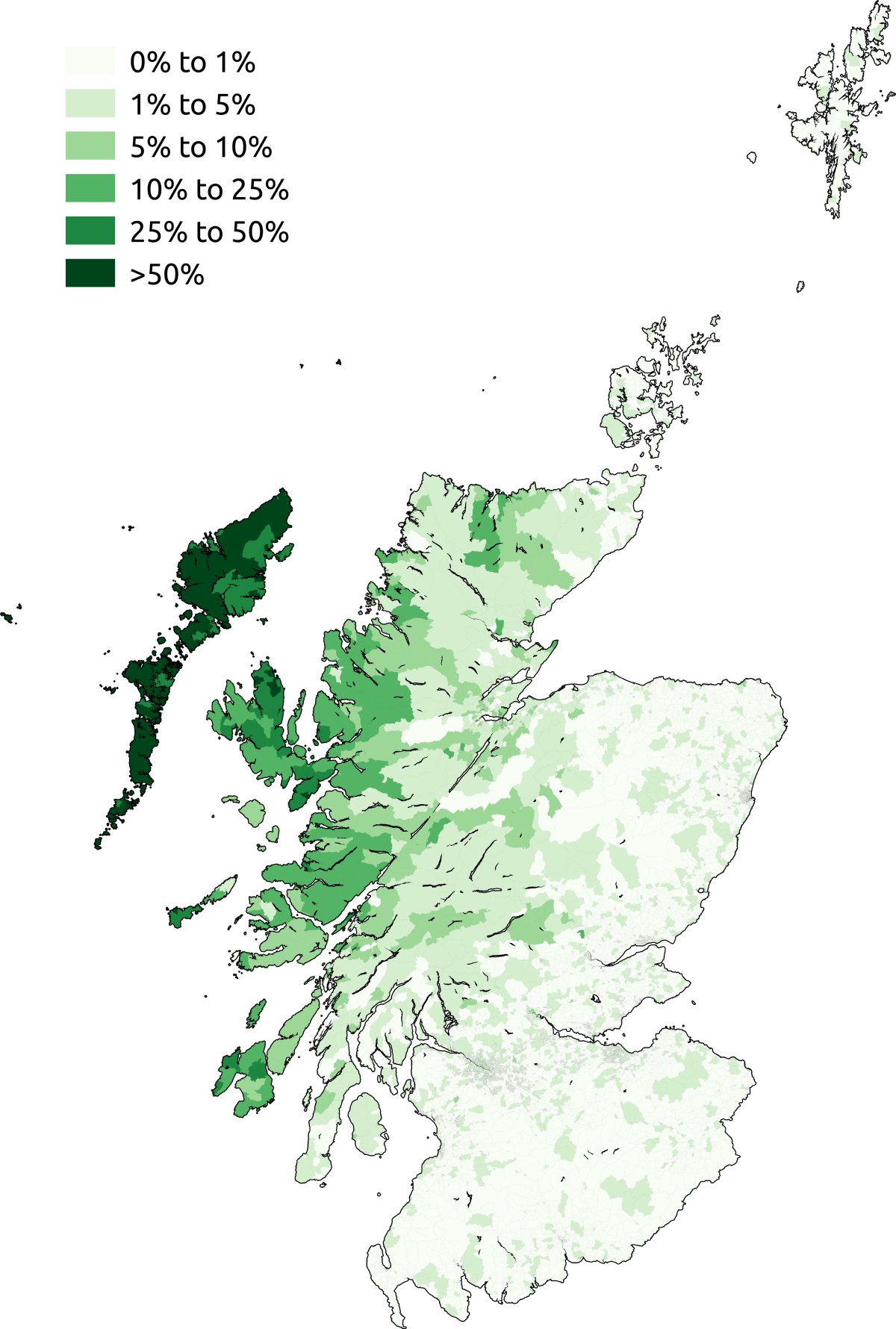 This map in isolation could be misleading, as it only represents density of speakers, not their overall distribution which you need to know to understand the full picture (below)

It's true that speakers as a proportion of the local population are skewed towards the traditional communities in the NW highlands and the Islands (let's say the Gàidhealtachd). However, at the same time around 50% of all reporting speakers actually live outside the Gàidhealtachd now, in the lowlands, with around 20-25% living in the more urban central belt, and 10% in Glasgow City Council area alone (higher if you include the entire Greater Glasgow conurbation). There in fact isn't a council ward (smallest administrative unit) in Scotland without some Gaelic speakers (Scotlands Census, 2011).

The stark contrast in the map above is partly to do with the fact total population density in the Gàidhealtacht is very low (large parts often more or less uninhabited punctuated by small settlements), whereas the central belt is often urban and dense, so the same absolute numbers of Gaelic speakers would have less impact on their overall percentage there.

This isn't to say density doesn't matter; it does for obvious reasons. However, the map in the post above on its own might lead you to believe Gaelic isn't spoken outside those areas, which isn't the case (particularly with respect to Glasgow).

NB: Total number reporting Gaelic speaking ability in 2011 was 57,375. The higher figure you have there includes all abilities (e.g. understands but can't speak).