Is it a bull? Is it a stag? Is it a demon? As long as it keeps eating the midgies, I don't really mind.

What would be the literal translation of 'damhan-allaidh'?

It is not obvious at first where this urban myth comes from, since if you look up the words damhan and allaidh in a dictionary you will see that they have nothing to do with walls or demons. Damhan means nothing except 'spider' but appears to be a diminutive of damh which covers various horned animals, such as 'ox, hart, stag'. Allaidh means 'savage, wild, ferocious, terrible, proud, haughty, boisterous, beauteous'. Take your pick of which words to put together to describe a spider.

But having seen Praedirus's post at https://forum.duolingo.com/comment/35938934, pointing out that the origin is Old Irish, it becomes clear. The OI is damán allaid. This diminutive, damán is used to mean 'calf, fawn', i.e. the young of the horned animal mentioned above. Over time, the m changed to mh, first in pronunciation and later in writing, but before it did, the word would have been very confusable with demon.

The allaid could have sounded like bhalla, lenited form of balla, as bh is often /w/ in Irish and the d would probably have been on the way to becoming like a dh, i.e. nearly silent.

So damán allaid could have been confused with something sounding like demon walla. The lenition would be caused if the word was assumed to be genitive plural - 'demon [of] walls'.

Too bad, "wall demon" is not accepted as an answer. XD Sounds pretty cute though! (And yes, I'm one of those nutters who likes spiders.)

might have got this wrong! trying to remember my source. think it might mean "fierce little stag!". soz

Since "damhan-allaidh" is made up of two words, what do they each mean separately?

really? When I looked it up on wiktionary I got damhan=bull/stag and allaidh=wild/fierce/ferocious.

read it was this somewhere but can't remember where. think i'm wrong but. seems to be "fierce little stag!" which is cool too

Google Translate isn't a dictionary. It works better for sentences or passages than for single words.

When I hear 'damhan allaidh' I immediately think of Harry and the Weasley family going shopping for the new term at Hogwarts...

Don't tell Ron that. I'm not sure he likes spiders very much. 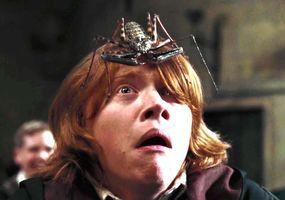 Why is a spider a fierce wee stag, I wonder- it's a cute name but what would make one describe a spider as a stag? Tha mi a' fuireach ann an Astràilia a-nis, I think I would have noticed if there were a spider species with antlers- if they existed they'd exist here lol. Sounds cute though!

Because that's a different sentence. Would be Tha damhan-allaidh agad. as far as I understood.