Yes, I have heard rabaid

This may just be the Lewis pronunciation of rabaid as slender d can often sound quite broad there. This may then have got confused with the English. Certainly rabaid is used elsewhere, with a clearly slender d.

Is coineanach a rabbit or a hare? In German, the two are often mixed up in colloquial speech: Hase=hare vs. Kaninchen=rabbit

They are not usually confused in the UK, except when people actually don't know which they are looking at. Rabbits are many times more common, with many people never having seen a hare, except the March Hare in Alice in Wonderland, or Bugs Bunny. Bugs Bunny cause confusion in the UK as a bunny is another word for rabbit. He is referred to as both a hare and a rabbit, but looks like a hare. There is a good reason for this. He is not a European rabbit - he is an American species called a jack rabbit, which is in fact a type of hare, not what a European would understand as a rabbit. Confused yet?

Bugs Bunny is a rabbit. He lives underground. Hares do not.

There is a lot of evidence on both sides.

Howstuffworks lists a number of hare features but the only rabbit feature apart from his name is his underground abode.

theVINTAGENEWS shows that he evolved from a hare. It also has a nice picture 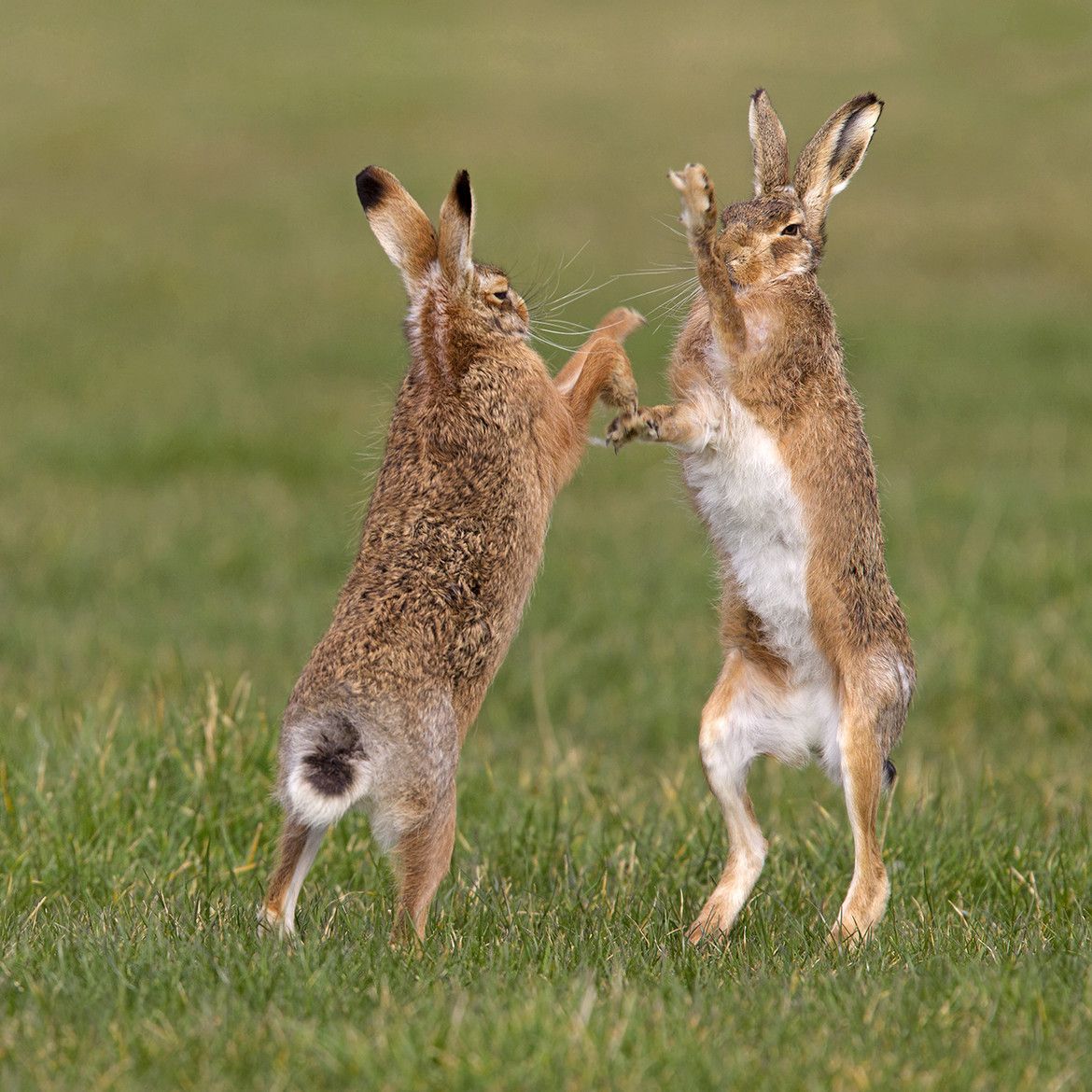 Despite the fact that he lives underground, rabbits that do that generally live in large social groups, which Bugs doesn't.

As for his name, Frankly Curious discusses this and explains that rabbit is used for several types of jackrabbit, i.e. of hare.

Coineanach seems to be a loan word from old French: https://en.m.wiktionary.org/wiki/connil#Old_French The Wiktionary entry suggests that approximately every other European language just adopted the old French term for these little fur balls.

Wiktionary is getting more and more accurate information put into, but sadly there is nothing to stop rubbish being put in as well. All information in it should be supported by references. It only gives one reference for the Old French word. It is not a reputable dictionary (in as much as I have never seen it quoted, and it looks like it was written by someone just putting down their own thoughts). But worse, it does not make any claim about the descendants or etymology, so it is not relevant evidence. The entry for the Latin gives several references, but none relevant to its etymology that I could see.

What is interesting is that all etymologies that I have seen before have derived the word from the Latin for 'puppy'. Whilst I do not find that plausible, it looks, quite frankly, as if someone has rejected that and made something up instead. The Latin word now comes from a Greek word with no link (which it is suspicious as it means it is not in Wiktionary).

So the word has gone from Western Europe, possibly Celtic, across to Greece, back to Rome, then to France, then all over the place. If the word started in Iberia, a place where there were Celts, some of whom migrated (it is thought) to Britain and Ireland, then this journey round the Mediterranean seems preposterous. It is noticeable that whilst the entry for Old French gives the Gaelic as a descendant, the entry for the Gaelic does not mention Old French. I have not heard of any words that are claimed to have gone from Old French to Gaelic, and it is difficult to see where the contact could have occurred.

Given how widespread rabbits would have been, and how widespread the c-word for them seems to have been, I think we can confidently say this word, with two separate ns, spread round Western Europe without the help of Latin, Greek or Old French, all notable for the lack of the second n. D

Whereas "rabbit" originally meant the YOUNG of the coney. I guess it was more pleasant eating, so took over, just as "chicken" has replaced "hen", even for adult egg-laying birds

I have not heard that before, and it is not supported by the etymology in Wiktionary. Have you got a reference? Wiktionary does mention a diminutive, but there is not suggestion that our word rabbit comes from there. There is also a suggestion (that might be true) that the word was a diminutive of a word that meant 'seal', in the same way that it has been suggested (again this might be true) that Latin cuniculus derives from a diminutive of their word for 'dog'. Thus there are potentially two words that suggest a rabbit is named as the diminutive of another animal. I suppose there is some similarity between rabbits, puppies and seal pups.