Anyone else find the audio to be too fast? The duolingo german program allows the audio files to be slowed down. It helps sometimes

It's because it's beta, I guess. Irish and Korean have it too, but not Gaelic and Latin.

Yes. One of my bug

Secondly, the difference is between those courses that use a robot to do the speaking and those that use real people. They can ask the robot to slow down but not the people. I would have thought that it was pretty easy these days to use software to slow down the speech without distortion but Duolingo doesn't seem to be able to do it.

I don't know why some courses use robots and some people. Maybe they just can't find robots that can speak Gaelic or Latin. Anyway there is boundless frustration with the Welsh robot as some of the pronunciation is seriously wrong, even getting the stress on the wrong syllable or getting the wrong number of syllables. On the other hand the Gaelic is a bit confusing at the beginning because they have deliberately used people with a variety of dialects, but they are all genuine and it is absolutely fascinating for the more advanced user. If they just removed some of the weirder pronunciations from the early part of the course and found a way to slow it down it would be better than any other course I have ever done for pronunciation.

Why? If i cant hear i whats the point? And your explanation that they cannot ask a person!!! To slow down is ridiculous! Bruidhinn nas slaodiche eh????

I have just discovered how to add an emoji.

You have to go somewhere like quackit.com that gives hexadecimal or decimal codes and put in the code that starts with an & and ends with a ;
So if IainFergus10 had typed bug&#x1F43B;s it would have appeared as

Audio is very quick here. I didnt pick up in the "thu" at all. Did think it was strange to not have me/you/she/him/it.

I am glad to read that other people didn't hear a trace of "thu" either in the audio-- guess it's not just me!

Also "ceart" does not start with a "sss" sound. Annoying

I didn't hear the "thu" either. It sounded more like he was saying the word "how" and not "Tha thu".

If someone could please clarify; does "-art" have an S in it when spoken? I'm hearing "cearst".

It's more of a high-pitched ‘sh’ sound (I can see how it comes across as an ‘-s’). You'll find the other speakers sound more like what an English "sh" tends to sound like (remember you can check the phrase in your Words section and hear the various phrases that include it spoken and hear how it might vary from speaker to speaker). 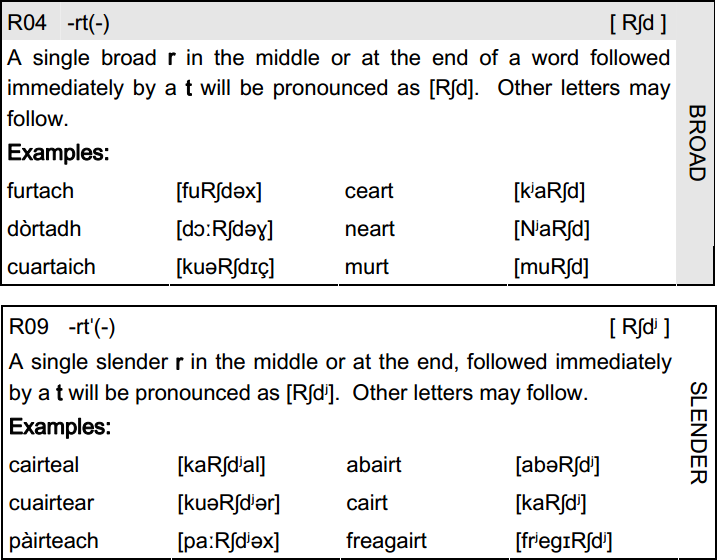 In some dialects, ‘-rd’ also does something similar to this. ‘-rt’ behaves more universally in this regard though.

Your question has been answered. Of course in some dialects it's pronounced cart like in Irish. The Irish phrase (I don't speak Irish) is pronounced cart galore. That's where you get the English word galore from.

I am not aware of any evidence, or even claim, that the English phrase comes from Irish. It is best known in specifically Scottish contexts such as the well known film Whisky Galore. Any difference in pronunciation can be put down to English speakers not being able to pronounce Gaelic.

The OED has it as coming from either Irish or Gaelic:

Firstly, the evidence is overwhelmingly supporting the Irish origin. A search of Google books in the 19th century reveals (if you ignore the references with capitals which cannot easily be edited out) a range of books with far more Irish links than Scottish ones. There is also a preponderance of naval references, which suggests that sailors spread the word.

The second is that I have heard lots of words mentioned as being of disputed Irish/Gaelic origin, such as smashing and shanty, but never this one. It has always been accepted as indubitably Gaelic in all the Gaelic-related discussions I have had. I have just learnt not to accept anything I hear without checking it up.

Well the word galore certainly predates Compton McKenzie's 1947 book "Whisky Galore" It first found its way into American English by Irish immigrants in the 19th century. The word peaked in popularity in 1915 according to Google Ngram, and in 1920 in British English.

Thank you. More interesting I think than the peak is when it starts. There is a clear take-off in British English in about 1855, weakly mirrored in the US, followed by a US take-off that can be dated to exactly 1879. I could only find one relevant publication in Google Books but it was British and it turned out to be a reprint of an 1834 songbook. However it seems most likely that the word appeared in some song or other popular medium at this time in the US. If anyone can find it, please post.

Either that or a "shh" sound.

Same for —rd for most dialects, but that's a bit more variable (sometimes sounding more like how you'd expect in English).

The first word is not clear - and the second one - appears to be missing!

The accent is difficult to understand and the speed of delivery makes it sould like one word, at best two. I often find this speaker difficult to follow. If the speed is intended to test us, it is far too early in the course.

This was too fast without an option to slow it down on a new skill. I felt set up for failure.

Yes. Unfortunately there is a technical limitation in Duolingo that means that slow speech is not available in those languages, such as Gaelic, that choose to use real speech as opposed to a speech synthesiser. Duolingo does not seem to have any software development programme, so sadly it is unlikely that this will be provided any time soon. We all agree it would be useful. It would be particularly interesting to hear the real speech slowed down so you can hear exactly what is going on.

so, would this phrase in Gaelic only be used where i'm telling a person they're okay (presumably if they are unsure of their social footing, or are throwing up)

or does it also get used the way the literal translation would in colloquial english? "You're right enough", ie, "you are correct" (with connotation that I had thought otherwise previously)