First section of the first module: 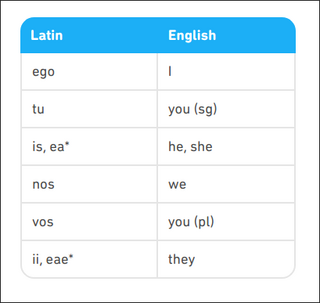 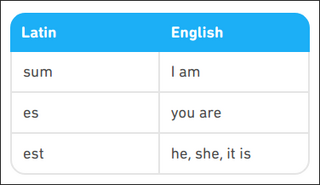 Thanks a lot, but where are you getting all of these grammar notes? Seems like you have a lot of them! Could you provide any for French and German, maybe? Thanks so much!!

Two ways. One, if you're on the app, go to the browser version (accessible through the phone browser, e.g. Google Chrome), and click on the lightbulb on the skill drop-down menu. Two, go to the site duome.eu and click on Tips and Notes at the top, scroll down to the American flag, and then find the German and French flags in the row of flags following it.

Actually three. Go to duome.eu/(your_username_here)/progress (make sure you have the language for which you want to see Tips and Notes selected in Duolingo) and click on the little lightbulb icons next to the skill icons. This will give you a drop-down of that skill's Tips and Notes.

Just FYI (if you made the chart), you might want to include the conjugations for the verbs.

I only added the words that are given
before the first crown is earned. It is
a chart of the vocabulary given to the
absolute beginners.

Technically he did not make the chart; it's a screenshot from the Tips and Notes.

Best of luck with Latin! :)

By the way, I am somewhat close to fluent in Latin. I didn't need the table. I just wanted it to help others. :)

Strange! My Latin course does not have any tips or notes. I appreciate the info however.

If you're learning it on the app, that's probably why. Many courses don't have Tips and Notes on the app.

In any case, here's a link to the full Tips for future reference: https://duome.eu/tips/en/la

Uh-oh...I tapped on the link and it said, "Duome has unexpectedly closed this site.". Any one else get this? 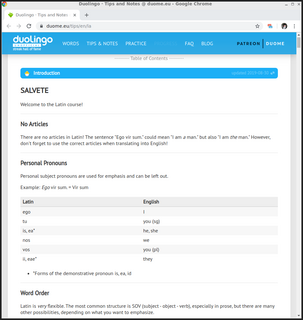 ⚘ It's working now! Must have just been my phone, or something! Thanks guys!

Does the error persist when you refresh it?

FWIW, it is customary to mark the declensions and conjugations by

We were actually learning all those four forms at school, before learning what the other two mean, but that is probably completely unnecessary.

We were actually learning all those four forms at school, before learning what the other two mean, but that is probably completely unnecessary.

It's worth learning them now! If you do not learn them when first learning the meaning of a verb, you will have to learn them later on if you want to have any facility in Latin.

FWIW, one of the few improvements to Wheelock's Latin grammar, the method probably most used in American colleges nowadays, made after the 3rd edition (which I used) has been to introduce the principal parts early rather than recommending after a dozen chapters or so that they be learned for all of the verbs theretofore presented. Speaking from experience: learning the rest of several dozen verbs' principal parts (which is what those four forms are called) all at once is a long, long, hard slog that is best avoided.

That's how I learned declensions and conjugations when I studied Latin at school too and I also agree that they still should be learned like this:

for declensions, like "rosa, rosae" so you easily know which declension it is

so you would easily know which conjugation it is, and if it is transitive or intransitive, because it doesn't have participle (scriptum)

(In some countries, we use long marks to distinguish, e.g., scribere (SHORT -ere infin.) and studere (LONG -ere infin.); I see that you also list the 2nd pers. sing. of the present indicative (scribis vs. studes), so that we can see at a glance that scribere is 3rd conj. and studere is 2nd. )

For a lot of verbs, it's really the 4th Principal Part (in our system: so, the perf. pass. participle, or the supine) that gives rise to a lot of derivatives that the student is usually familiar with:

Thanks for the information.

Thank you SO much, very useful tool Kelikaku!!