Does this refer to a human, or a box, or both?

The box type of chest is ciste (f) (related to English chest and cistern). If you specifically wanted a word for a small box-chest, as in this question, you could use the diminutive cistean (m).

Yes. There are of course lots of possible explanations for this similarity, but there are very few Gaelic words borrowed directly from West Germanic (which includes German) or vice versa, so we have to look for some other source. The word is also found in Irish which has even fewer direct borrowings from any kind of Germanic. That Wiktionary reference suggests the Irish comes from the Latin cista as does the entry for German Kiste. But that entry also says it is an old Proto-Indo-European root, so why do we not just assume that each language just inherited the word? The answer, presumably is the similarity of the forms. Usually when words are inherited from so far back we would expect quite a lot of divergence. A much more recent borrowing from Latin-speaking monks would explain the similarity of form. This Wiki article or Cista suggests it might have been used specifically for a box containing sacred objects, and indeed the term was used for a container to keep relics or communion paraphernalia 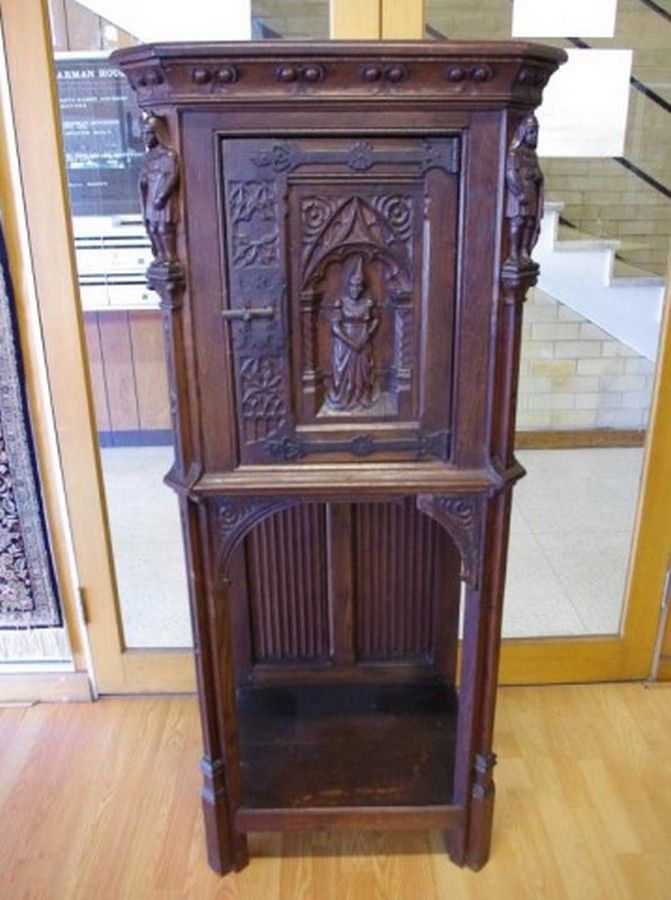 Cistern, as in a water cistern?

Yes. Whilst we may think of a water cistern as part of the plumbing in a toilet, it was originally just a water-storage vessel of various types – see some pictures on Wiktionary. The Latin word cisterna comes from cista, from the Greek for a 'box' but I cannot find an explanation for the ending -erna. They were basically cuboidal buildings that contained water, that is, boxes made using building technology, as this illustrated Wikipedia list shows.

Does this refer to the female bust as well?

Yes. In my experience it is the primary meaning.

Mark
bosom, breast, bust, chest □ bha trì buinn air a bhroilleach there were three medals on his chest □ bha suaicheantas beag airgid air taobh deas a bhroillich there was a small silver badge on the right side of his chest

Dwelly
Breast, bosom, front. 2 Brisket of beef. A broilleach mar chobhar nan stuadh, her bosom, like the foam of the waves; an urrainn duine teine a gabhail 'na bhroilleach agus gun a aodach a bhith air a losgadh? can a man take fire in his bosom without burning his clothes? broilleach bàta, the bow or stern of a boat

There is of course a big problem. We may think of some of these terms as specifically female, but according to Wiktionary, only bust is. Breast was originally, but can also be used to mean 'chest' and bosom only became so in the 20th century. That is significant as it it quite likely that Dwelly could have used it in the old sense, and a lot of the material in AFB is copied from Dwelly. Even in Mark there is the possibility that the translation given was not that up to date.

But overall I think we get the sense that each dictionary gives the female sense first, even though Mark cannot bring himself to actually give any examples in the female sense. We see that Dwelly gives one example of a woman's bosom (a rather odd simile that I do not understand – can anyone explain it to me?) and one of a man's bosom.