A heads up on listening exercises.

We've seen a few reports come in recently on listening exercises, and I thought I'd give an explanation as to how they work.

If you get a listening exercise that has a Gaelic sentence written above a blank box, you are being asked to translate it into English. 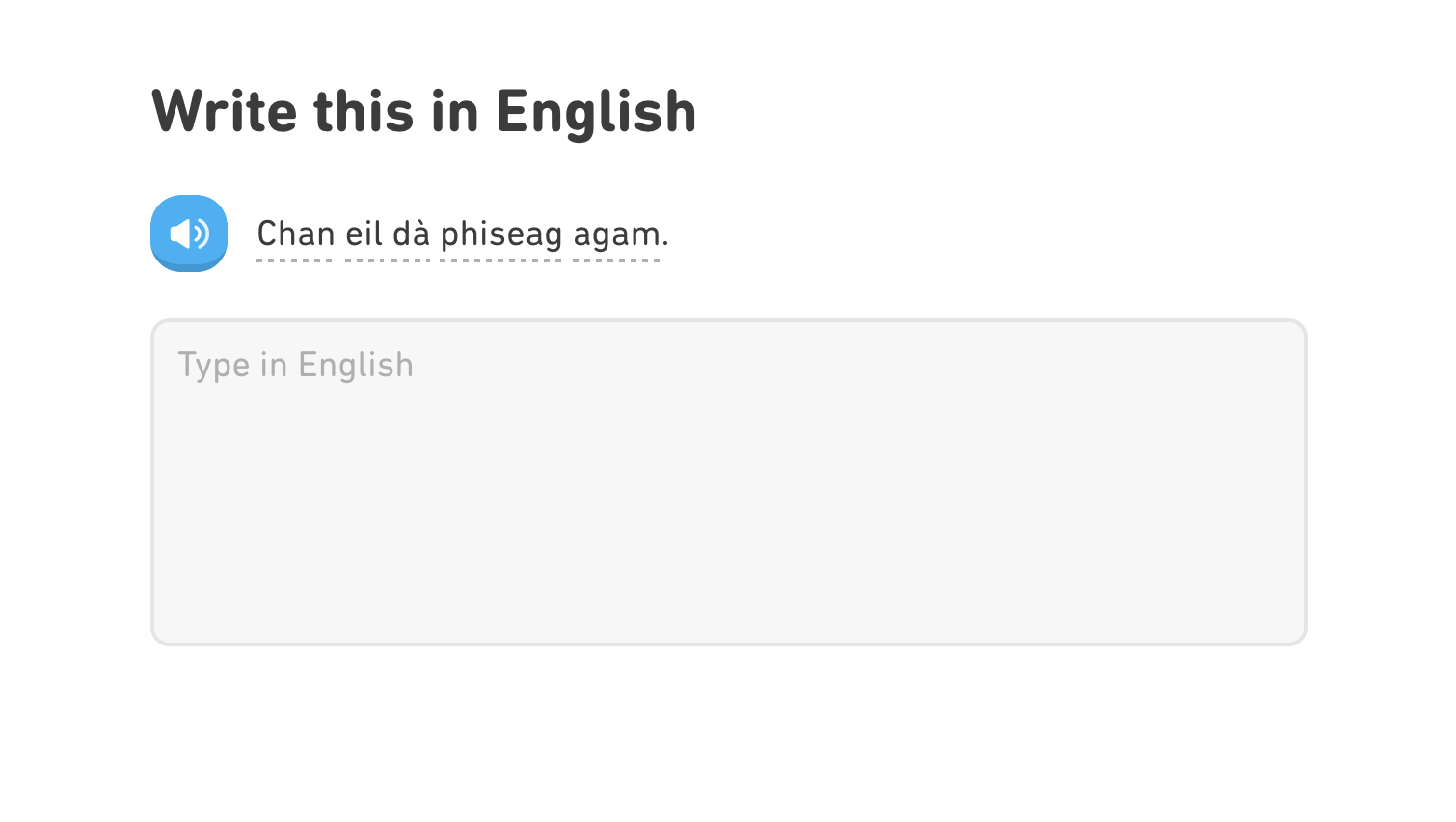 If you get a listening exercise without a Gaelic sentence written, then you are being asked to write what you hear in Gaelic. 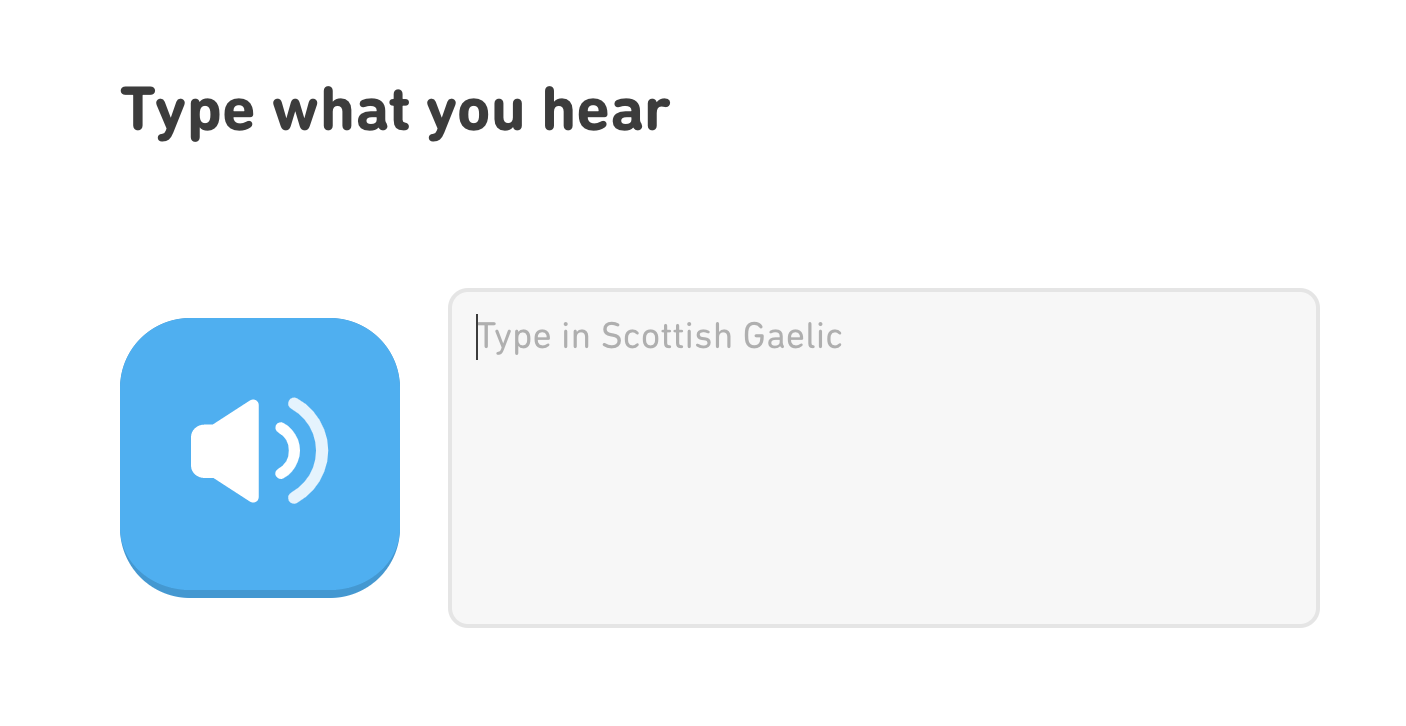 The text box that you type in tells you what language you are being asked to write in. It will say either:

I know a few of you have been hearing Gaelic sentences, typing them in English, and then reporting them when they are marked wrong. While I admire your (often successful) attempts at simultaneous translation, y'all are making life too hard for yourselves!

I hope this clears things up for you all! :D

On the topic of reporting, is it worth reporting the occasional sentence where the audio is clipping badly? I report them as I go, but I'm guessing by this point you're already aware of the issue (if perhaps not specifically aware of each individual instance), and I'm sure it's probably a slower one to resolve. That said, the unpleasant spike in volume can be painful as a headphone user, to the point where I'd actually just rather have no audio on such clips than the faulty audio.

No, please do report those! We can easily disable them, even if we're not able to rerecord them straight away, but we do try and have at least one audio file to each sentence. I'm not sure why the files keep corrupting like that :( And yeah, we have no way of knowing the individual instances unless you guys tell us. It would take days for us to check every single audio file individually ourselves.

That and being fluent it can be quite hard to tell if the files are bad anyway. I see lots of people complaining about audio quality, but have always been able to make out what is being said anyway. I imagine the mods have a similar issue.

Yeah, some of the reports we get are just people struggling to understand accents or the like.

We do also have a problem though where some of the audio files have a loud burst part way through and that is something we're trying to fix at the moment, but it's tough to track down all the instances of it happening. There are 6000-odd sentences in the course and we're a small team, so we rely on the audio reports a lot to locate them (even if some of them aren't valid complaints).

Halò Joanne. I had bad start with the course because of a misunderstanding due to losing the app. It may have been yourself who helped get the app back for me but since I have never been able to use my discuss button though I do get a lot out of at least being able to read and hear responses to other posts. Is there something that I can do on site. I am using an iPad. I have to say that I am gu math toilichte with the course which is seeing me through the Lockdown. Tioraidh

Thanks for explaining this Joanne! It definitely helps! And thank you to you, all the contributors, and all the native/fluent Scottish Gaelic speakers who have been posting and answering questions in the discussions and forums! It helps massively!

One thing I was wondering, I saw on the incubator that there's currently 16 contributors, but on the course page it shows 4 contributors. I just wondering, how many of you are on the team and actively working on the course still? Of course, I know you and CIMacAonghais are clearly still working on it! Thank you for all the work you're putting into making a great course! :D

"Hey! I could be wrong but I think currently there are 3 of us (Màrtainn, myself and Joanne) working on it regularly. Another two have just come on board and are in the process of being "onboarded" and a few others have helped us on a more occasional basis, with things like alternative translations, adding exercises and initial testing. Most of the other listed contributors provided voices and will hopefully do so again in future. Hope that helps!"

Tapadh leibh! I kept doing that, not noticing it was a dictation sentence, but that was my lack of observation - must try harder! Enjoying the course very much, great revision for stuff I've long forgotten. Re remark later regarding dodgy recordings, I've also been able to follow all of them - except one - when I relistened, but there are a number, by a lady whose voice suggests she is a little older, which can be a bit faint. I think it was one of hers that I misunderstood - I listened three times and still heard "Tha hama à Sasainn" - when it was actually Anna!!! Duh!

I know which person you mean and I agree its very difficult to hear her, not the accent but the recording is very...echo-y for want of a better word, like shes miles from the microphone in a big empty room and I struggle to pick up on what she is say every time

Wow! I think I may be a culprit. Though hope not. Will check it out. Tapadh leibh.