Why is one of late distilleries (and one of my favorite whiskies) spelled as Glen Mhor? Is that a mistake?

Sadly it is the phenomenon in Scotland of trying to make names look 'more Gaelic'. This is a rampant scourge and infuriating. Another example is the Òran Mór bar in Glasgow. This one of unique (so far as I know) in that it was forced to change under public pressure, which is why the link is from a discussion forum in 2005 (where posts actually spell it mhor and even mohr).

One bizarre example was the Sgian Dhubh restaurant in Edinburgh, as the particular grammar rule that says there is no h here is sometimes referred to as the sgian dubh rule.

It is very noticeable that these businesses usually fail fairly quickly. I don't think this is people walking away in disgust but rather the level of business planning implied by not even getting your own name right.

Your example is intriguing because it is the earliest I have come across by a long way - 1892. It is located in a city, the unofficial 'Capital of the Highlands' at the time when the Highlands were the trendy new tourist destination, due to free marketing provided by Her Majesty and the newly opened (1855) railway. I can't help wondering if the distillery wasn't built as much for the tourism industry as for its whisky. Perhaps tours were available? This touristy name cannot be explained by the marketing of the whisky itself as the whisky was never sold directly to the public.

Note the historically correct spelling is mór. A few words, most noticeably this one, had the accent going 'the other way' until 1988.

A related and excruciatingly almost universal error is fáilte - but this is not an old spelling but an Irish spelling used entirely through ignorance.

I've been noticing those fancy contortions frequently: Cu dhub instead of "Cu dubh", Knockdhu instead of "Cnoc dubh", Ledaig (to look more like Laphroaig, probably) instead of "Leideag"...

What's wrong with fàilte? I saw some accents in faclair.com going the wrong way - is this the case, too?

You give some really interesting examples that cover three different reasons for spelling change. I deal with a fourth at the bottom.

But first I have to say something about the accents. There are frequent complaints on this site about answers being marked wrong, typos etc. resulting from Duolingo's choice of typefaces - which are even worse on the discussion pages than on the question pages. Please zoom in so you can see the accents clearly, including which way they are pointing, before you go on. It is difficult to describe the choice, on a program whose sole purpose is the teaching of language, as anything other than lunacy. Telling the difference between a à á â ä å is bad enough, but i ì í î ï ı is even worse. (Note that all of these are needed on Duolingo courses.)

This seems to be a brand name for a legitimate Scotch that was coined in Denmark - see http://cudhub.com/. The Whisky Exchange says

Cu Dhub
Another divisive whisky in the vein of Loch Dhu - a massively dark dram with vociferous fans. The name is meant to mean 'black dog' in Gaelic, although there are some questions about the spelling…

Rather hypocritical, I think, seeing that the Whisky Exchange does not seem to be even able to copy the name off the bottle. Note that cú exists only in Irish but it is not the common word for a dog. I guess that the spelling here is more a careless mistake by Danes not familiar with Gaelic than the deliberate use of a caducous h.

The English spellings of places in the Highlands were established when the government first mapped the area (to help the army control the savage Gaels). Spelling according to English rules is not an error, but the leaving out of letters that affect the pronunciation may be. Spellings such as Dunblane instead of Dùn Bhlàthain are not fully explained by scholars and may well have different explanations in different examples. Here it could be due to the h not always being written in the first millennium, or because there never was an h in the Pictish.

This explains the Knock and the Ledaig. The Dhu is clearly a simple caducous h.

Now that you have zoomed in you will see that I did not say fàilte but fáilte. This is not one of those words that was ever spelt with the uphill accent so this is simply a mistaken use of Irish.

Faclair.com does use the old spelling. There are two columns in this dictionary. The right-hand one is Dwelly (1911) so the old spellings are correct, but the left hand is modern, so it is 100% wrong. This is one of a number of really annoying idiosyncrasies in an otherwise superbly useful and reliable work. I find it exasperating, along with the wrong - often impossible - pronuciations given in non-standard orthography.

Origianally an accent was used to mark a long vowel, written in different languages in different ways for no good reason - Gàèlìc, Írísh and Ŵêlsh. Gaelic then used the úphíll áccént for a slightly different sound, but it is not very helpful as you really need to learn the irregular pronunciations on a one-off basis. These were formally abolished in 1988.

This is a term used in some grammars to describe the h in na h-eileanan that is there for no well-understood reason. As a term designed to give the impression of erudition - an inkhorn term - it is perfect for describing this situation. As an aside there is a caducous silent p in ptarmigan. It was inserted to show that the author was sufficiently educated to know that the word came from Greek. Just a pity that there are no such birds in Greece and it comes from the Gaelic tarmachan. It is the Snow Grouse in the picture.

The one you didn't mention is the pun. There is nothing wrong with a good pun, but you must decide if either of these is in that category: 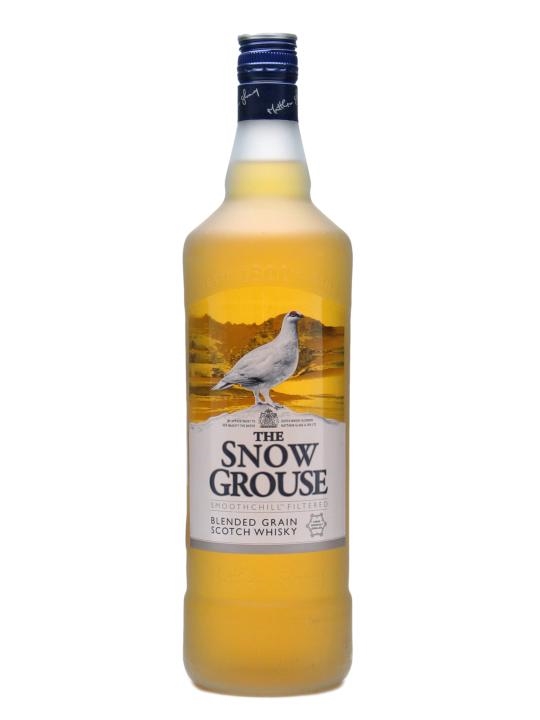 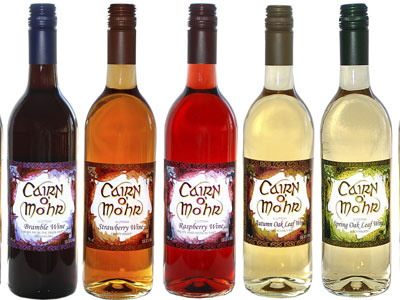 Thank you for such a comprehensive answer!

Knowing the difference between Gaidhlig and Gaeilge and normally using the left column at Faclair.com, I suspected that it was not always correct...

Didn't know about the White Grouse (quite a nice dram, by the way)! :)

By the way, just encountered an expression tobar-mhiann (wishing well). Tobar is masculine, so I was surprised to find m lenited. Caducous h?

I had to look this word up. Mian is a wish, so it is time to learn about the genitive plural. This is covered in the Genitive 2 unit. Mian follows the pattern of eilean so the GP is mian (i.e. no change). So far so good but there is one more thing that is not covered in the notes. When there is no article, the word is lenited. I have never seen an explanation for this. I have always assumed that way back there was a preposition that meant 'of', that caused the lenition, and then disappeared. This 'cause lenition then go away and hide' behaviour is quite rare in Gaelic (though you have seen it, e.g. chuir mi 'I put') but it's far more common in modern Welsh and Old Irish. So I would translate tobar-mhian as 'well of wishes' (It usually causes confusion when we translate genitives with 'of', but it's OK when there are no articles anywhere.

Why is 'dale' not an acceptable translation of 'gleann'? Is it too much of a Scandinavian word to be considered generally English? I know that 'dale' has been incorporated as a seperate word in Gaelic in the far northwest, leading to anglicised tautologies like 'Glen Dibidil', but I don't think the 'dail' of the Scandinavian-influenced far northwest is a distinctly Gaelic word...? Just curious. Yours, Uilleim.

This is a really good question. I am going to try to answer it based on what I would do, but I cannot speak for anyone else. It is certainly true that they can refer to similar geographical features, and indeed Dwelly does give dale as one of the meanings of gleann. But I use the word glen in English to mean 'valley in an area where the names are Gaelic' and dale to mean 'valley in an area where the names are Norse, but I would use valley to cover any sort of valley. That means that I would never describe the same place as a glen and a dale. Now in Gaelic, I think I would still use dail to mean 'valley in an area where the names are Norse' so if, for examples, I were speaking to someone in Gaelic about my holiday in the Yorkshire Dales, I would use dail. Anywhere else in the world I would also use the local word to describe the local geography if I knew it. I would use Gleann to mean 'valley in an area where the names are Gaelic' but also to translate valley in the general sense. Thus I think they could translate gleann as either glen or valley. But when it comes to what they accept, as opposed to what they give, they need to be more tolerant. They cannot be expected to provide a list of all conceivable valid translations into different dialects, but when a significant number of people choose to use a particular word, and it does show you know exactly what the Gaelic means, then it should be accepted. So in this case I would accept dale if I were in charge.

According to Am Faclair Beag, gleann = glen, valley; dail = meadow, dale, field; srath = strath, wide valley, vale. I don't equate glen and dale at all, because glens tend to be narrower, rockier, and a dale is wider, grassier - nearer to a strath. I don't think I'd ever use dale as my go-to word, I don't think it's common usage for a valley north of the Southern Uplands, where it's quite common in valley names, Liddesdale, Nithsdale, etc, though I wasn't conscious of folk using it generally instead of valley when I lived in that airt. Any time I can think of it coming up in a place-name it's the situation of the "meadow in a valley" type. That doesn't mean to say it shouldn't be accepted as a possible translation for gleann, if that is the word for valley that is in common usage in a person's area, even though a glen and a dale look very different "on the ground". I wouldn't use glen for valley in general either, unless I knew it was one, geologically, like where the northbound A82 goes round a curve and Glen Falloch becomes Strath Fillan. Brilliant place to explain the differences. And then not so much further along there's a roadsign for Dalrigh, which is at the meadowy bit where the Cononish flows into the Fillan.

May 27, 2021
AboutDuolingo English TestMobileGearHelpGuidelinesJobsTermsPrivacy
Learn Scottish Gaelic in just 5 minutes a day. For free.
Get startedLogin