Translation:the squirrel and the cow

Why does the squirrel have an and the cow has a'. What is the difference between these two?

Although the initial letter of feminine nouns beginning with f or b are lenited to fh and bh respectively, the definite article remains an for those beginning with f. Presumably this is for ease of pronunciation.

Yes. Because the fh is silent it would be difficult to say *a' fheorag.

If your Gaelic words have more than one letter wrong, the Duolingo software doesn't recognise it as Gaelic and assumes it must be the "native" language, which for this course (Gaelic from English) is English. It's a "feature" of Duolingo, rather than this course.

Suppose you know or guess that bò is a feminine singular noun. The feminine singular definite article causes lenition (the insertion of the h) on all the letters you can normally add an h to except d and t and sometimes s (rules have probably not been covered at this stage in the course).

Oftentimes you will meet a word you don't know the gender of. In this situation you can often reverse the argument and deduce that it is feminine singular from the lenition. Things will get a bit more complicated later though.

It can be tough recognising feminine words. In the case of bò your best clue is the meaning as the word is usually used (in many languages) for the female of the species, although technically it is the name of the species too. In the case of feòrag, there is no biological clue, since most people do not know the sex of a given squirrel, so the gender of the word is arbitrary. In Gaelic it happens to be feminine, as you can tell from the -ag suffix. This is why it too has that h inserted.

So , I have to male you aware that the last lesson would not let me advance saying I typed in english. It has happened before and I know others have also had this trouble. I am not complaining just trying to make you aware. Thank you for all your hard work. I love this course.!

missing a-apostrophe in the options ... this is not helpful

That's a limitation of the Duolingo platform, rather than this course.

Are there separate words for reds and greys our do we just use glas/ruadh to distinguish like in English?

It may be worth looking that the history of these two species to understand the vocabulary used. If the two species had co-existed in Gaelic-speaking areas for centuries then we would expect two completely different words, or two different but related words. But this is not the case. Prior to the 1870s, the red was the only squirrel in Britain and therefore one word, feòrag was quite adequate. Grey squirrels were introduced to Britain in the 1870 and presumably got to Gaelic speaking areas a considerable time after that, although I cannot find a date. An Ngram plot shows that no one was really using the terms grey and red to distinguish squirrels in British English until people suddenly started in the 1920. when the terms took off explosively, whilst the tern squirrel remained at a constant level. By this time, English was fairly widely know, and in particular, since the greys were migrating from the south, news of them would also have come from the south, from English speaking areas. That means that the first time they were heard of in Gaelic it would almost certainly be something like

Have you heard about these new animals a bit like feòragan that are coming up from the south. They are bigger and a different colour. In English they are now calling them 'grey squirrels' / 'feòragan glasa' and the real ones 'red squirrels / 'feòragan ruadha'.

It is easy to see how we ended up with the Gaelic just a calque on the English. So the answer you your question is 'yes, we just use glas and ruadh'.

As an American I had never heard of a red squirrel and just had to Google to see what you were talking about. We just have the boring gray kind here.

Yes. I live in the middle of Scotland and we have greys. I can see a red by driving 15 miles. They are far more popular, and they are many people's idea of a squirrel if they have read Beatrix Potter or various other children's stories. Although she talks about reds as if they are the only kind, she was actually brought up in London and would have been familiar with greys, only seeing reds when on holiday in the Lake District or Southern Highlands (which is where she went habitually as a child), before moving to the Lake District as an adult. It is well worth everyone reading Wikipedia on red squirrels from where I got this picture 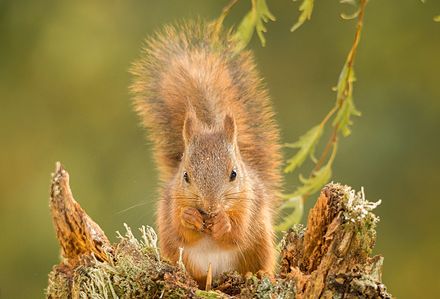 Answer: "An fheòrag agus a' bhò" Question: "What is the name of some obscure Gaelic pub, Alex?" Alex: "Sorry no, but slàinte mhath anyway"