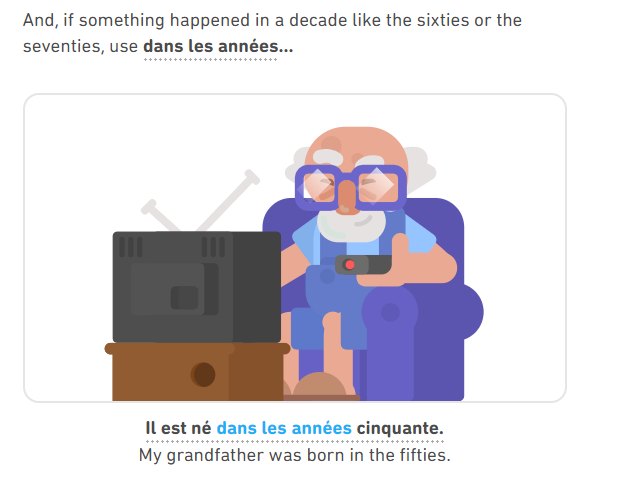 I think you are right - if you want to translate the sentence word for word: he was born in the fifties. (the picture shows only that it is about an old man - not a grandpa) Grandfather would be (le) grand-pere

The translations in many of the new TIPS in French leave much to be desired.

The only explanation I can think of is that the English translations were written by a German who knew no French and used the pictures, and the French sections were written by someone who knew some French but wasn't a native speaker, and had little experience of motoring (you will see later skills when a stolen car is spoken of as cassé, and a map is incorrectly referred to as masculine "le carte"), or italian cuisine (as they were unaware the gender of Pizza, also turned masculine).

However, that is as nothing compared to the English used in some lessons in the newest skills (18 of them dumped unceremoniously in the middle of the tree a while back) which was written by an American who clearly hadn't travelled much beyond his locale and used the local colloquial English that no-one speaking any form of standard English (be that American, British, Australian or Indian English, or indeed any other standard form!) can make head nor tail of.

No wonder you are confused!

Il est né dans les années cinquante = He was born in the fifties.

There is no possessive and there is no grandfather in that French sentence.

Whoever wrote "My grandfather" messed up.

It's an error. What probably happened is that they changed the sentence from Mon grand-père to Il and forgot to change the French. Or the other way around.