Don't say that in some regions of Brazil!

Usually, cracker for biscoito and cookie for bolacha, but they are interchangeable. And sorry, I'm a "balachist"!

In some regions it means a punch on your face.

is it a kind of big word?

Hahaha, not really. We use different words in different regions (like bolacha e biscoito), so we kind of fight about them (more like a joke, not a real fight tho). But the meaning is the same.

Hello. I put a chocolate biscuit because where I live we don't say cookie. How is that wrong

Got this one wrong. Biscoito sounds like biscocho (spanish) which means cake for us in Puerto Rico.

This happens to me all the time. Like when I've been pronouncing the rr in arroz and now i have to remind mysekf thats its ok to nit roll but drag lol

Spot the borriqua, got me too. I do like my cake ;-) Knew that cake was bolo before so I was confused what would biscoito mean.

It is also very similar to biscotti, which while Italian, is a widely used word here in the US especially at coffee shops and such. I was surprised they wouldn't accept it. It's basically a loan word.

I know the pain.

leite com chocolate = the milk was not made of chocolate, but chocolate was added to it.

Spanish is my native language. It's somewhat similar to portuguese, but "biscoito" would seem like it translates to "bizcocho" (cake in spanish). This sort of confuses me.. why does biscoito mean cookie instead of cake?

Cake = bolo Biscoito = cookie, biscuit (I am not a native, but that seems right)

A biscuit is an international word for a cookie

Well, I can't tell you why it means cookie instead of cake, but teI way I remember it might help you. It's a little weird, so I hope it doesn't confuse you more. Biscoito sounds like biscuit, a biscuit is kind of like a scone, which is kind of like a big, hard cookie. Hope this helps.:-)

In the UK) and I think in most Commonwealth nations), biscuits are exactly what we in the USA call cookies.

"Biscoito" reminds of Italian "biscotto" which means biscuit (UK), or cookie (USA), so it is actually easy for anglohablantes to remember. =)

Also, just to be certain, can I say leite de manteiga, por favor if I wanted some butter milk then? :o

Well, we don't have leite de manteiga (literal translarion), but we have soro de leite (coalhado).

This was my answer to the earlier "a chocolate cookie" and it was wrong. Said it was bolachinha de chocolate, which I had never seen before. Very confusing.

In a different one, we are told that it's "leite com chocolate" because it's milk with some type of chocolate in it, as opposed to "leite de chocolate", which would be milk that is somehow not milk and instead chocolate. 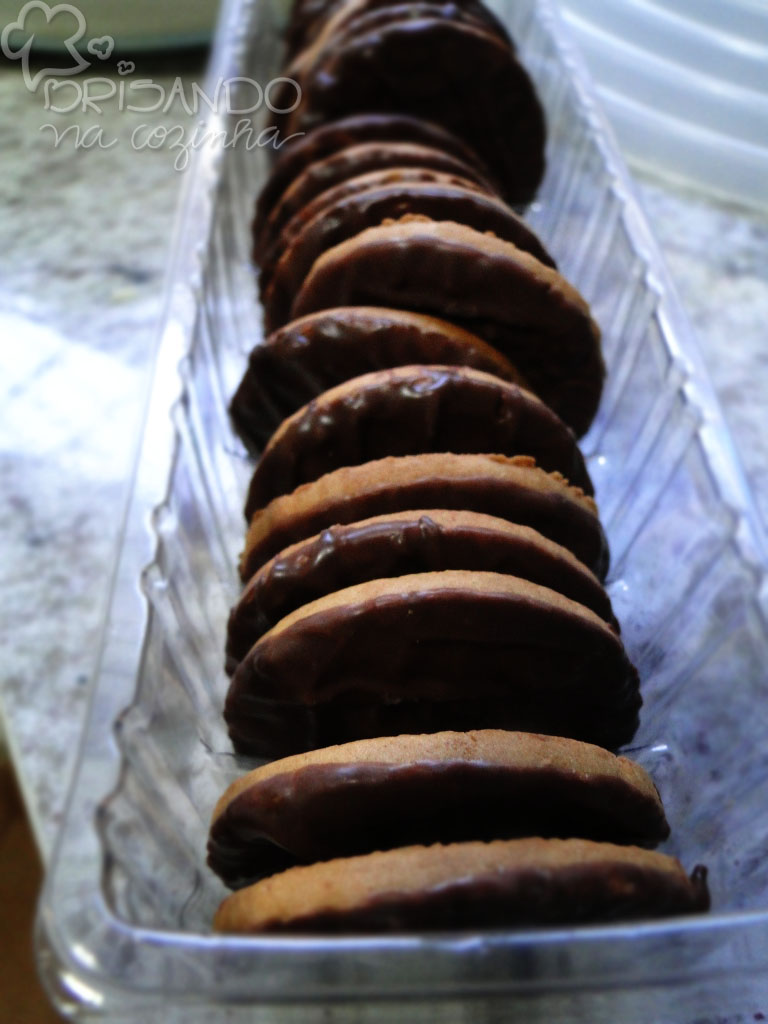 What percentage of the ones in the second picture is chocolate? How much of the brown is due to dye and how much other ingredients make up the biscuit?

Maybe now you can see my confusion?

If something is made with chocolate, use "de". If you spread chocolate on it (first picture), use "com".