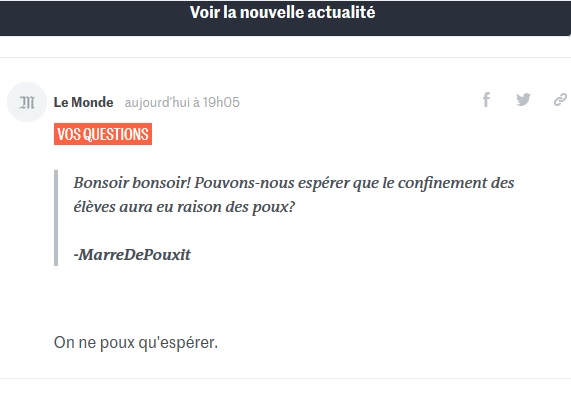 who is this supposed to be meant for? are people supposed to put all that into google translate to understand it, or is it only for people who understand a lot of french? a little context in english would've been nice.

are people supposed to put all that into google translate

It was a question from a learner of French to someone who could answer it. As a rule, I try to ask my questions about French in French. I have found that when I ask a question about any language in English I get all sorts of answers, some of which are invariably inaccurate. This happens especially in Spanish and French. Not that there is anything inherently strange about those languages--I suspect that it has to do more with sheer numbers of learners than anything else. But if a person can read the question there's a good chance that he or she might be able to answer it. (No guarantee, of course. There are idiots in every language :) But generally my questions are simple so if you can read it you can probably answer it.)

Also, frankly I'm here to learn French (and other languages). One way to learn is to practice. I get many opportunities to listen and to read, and a few opportunities to speak, but writing opportunities are fewer and farther between. Having to think about how exactly to write my question in my target language is an excellent exercise for me.

The question has been answered, efficiently, so it seems to have served its purpose. I am greatful to Jojo.

i apologize. i didn't mean to come off as rude.

haha. No worries. You didn't say anything rude. It was a fair question.

My feelings got a little bit hurt only by Jojo because he said "votre explication" instead of "ton explication" but I'll get over it. :)

I thought about it, I didn't dare. That's how complicated that tu/vous thing can be ! ☺

Oh, where are my manners?

@the_ambria, in my distraction I forgot to answer your implied question--it's buried there, in your rant, but I was too busy defending my choice of French ;) You wanted to know, in English, what I was asking.

The writer asks "can we hope that the confinement of the students will have cured our lice problem?" (more or less). Public schools everywhere have this problem from time to time. I remember one year when it was going around my elementary school.

But here the wording was one I had not yet encountered. I try to read a bit of French every day for a couple of years now--books, blogs, newspapers, novels, directions which come with electronics--but I had not seen this. The question says "aura eu raison". Generally, when I have seen "avoir raison" ("to have reason") it means "to be right". Here, it obviously does not carry that meaning. I stared at that post a long time and from context I could see that it seems to mean, idiomatically, what we would describe as "get the better of someone" or "get the upper hand". That is, achieving a sort of victory over something or someone. The best way I could think of translating it non-figuratively was "rid themselves of the lice" which is something like "se débarrasser des poux" in French. I wanted to know if I had figured that out correctly. That was really all the post was about.

Based on Jojo's explanation I think that the preposition "de" makes the difference here.

I understand 80% of it and I've just started learning French. It's good for practice.