Can 'jongentje' have a negative connotation? In Russian there are twp different diminutives for 'boy', one means 'little boy' and the other one is sort of dismissive/negative. Does jongentje work in a similar way?

No, it doesn't. It could be used negatively, but the difference would be in intonation

Dragen has many meanings. I know that it is used with clothing, but surely the little boy could also be carrying clogs. If you wanted to indicate that meaning, is there a better word to convey that.

In this example as Susande said, the boy would actually have the clogs on his feet according to 90% of Dutch people. Grammatically it can mean what you're saying but that's not what is implied by default.

Klompen, so the real "wooden shoes" have been worn in the Netherlands for a long time only by people who work on farms and vegetable / flower nurseries. Come and visit our country some time: you will see that normal shoes and boots determine the street image.

Why can't I use "wooden shoes" in place of "clogs"?

I think so too

I think it's because not all wooden shoes are clogs. But I'm not sure.

How exactly does one pronounce the 'tje' sound, I'm having trouble with that. Thanks for any feedback :)

This video might help! https://www.youtube.com/watch?v=jTo31XqnhEk&t=53 After she pronounces all of the endings, she also goes into when each is used. Don't know if you need that too, but it's there.

Can I use klompen for regular working clogs like one would buy from LLBean of Maine, USA, those we use on ranches, farms and gardens for muddy work where boots are overkill?

I don't know what type of clogs you mean, but I can give a few examples:

Pantoffel (definitely not a klomp):

Pantoffels (in the shape of a klomp, so you could call them 'pantoffelklompen'): 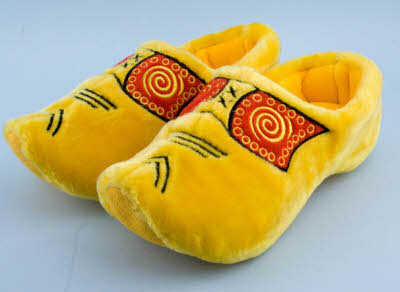 I garden in clogs like these more or less: Not the kind of foot gear we'd travel with, so in Europe you tend not to see these on Canadians or Americans, but usefully and conveniently they do exist.

They don't look very klomp-like to me, I'd say they would need at least some wooden parts to be considered klompen. I would call those werkschoenen.

Thinking this over, I should have mentioned that these originally had a solid wooden sole and a wood panel upper (the form of which is faked in the synthetic uppers) framed in leather, and are still rigid, but these have a steel shank in the sole and steel over the toes - you can drop a brick on your toes with these on, or walk over broken glass. Did they lose their klompenheid when metal replaced wood?

I think so, and the Van Dale (http://www.vandale.nl) dictionary definition seems to agree: "uitgehold blok hout als schoeisel" (this basically means: block of wood made hollow, used as footwear).

BTW kudos for klompenheid, I couldn't have described it better. :)

Ik ben oud! I can remember back in the 60's "clogs" were considered quite fashionable for guys as much, if not moreso than for girls. Those "clogs" were also known as "platform" shoes with thick wooden heels that were often quite high. We just called them.."clogs". When I first encountered this word taking Dutch, I confess I thought of those old "disco" platform shoes... I later figured it out..but thanks for these other examples!

why couldn't jongetje be kid It was accepted before

I am wondering if English has any diminutives, not using little. Please, some native speaker. hi

My variety of English, which is Californian with a Santa Barbara Channel region accent (grew up in the mountains a ladybug's flight north of Malibu) has a number that it uses that are common across the Anglosphere, one of which, '-let' is rather free and used on the fly to create diminutives. A good example of general English is the final -y or -ie in words such as 'doggy' or names such as 'Charlie' or 'Terry.' Because of the open 'o' sound used in this word (outside of Canada, only Californians and some other westerners give it the proper pronunciation of [dɑ:gi]) makes it sound to ours ears like 'dogie,' which is a calf separated for his or her mom, my area prefers to say 'doglet' but we also use this all the time for short nouns. Compared to diminutives in say Swedish or Dutch, it has a high degree of literalness and less emotional employment. No one would call a mastiff or Great Dane a 'doglet' except as a joke, but for a mid-sized dog like a collie or moyen poodle it would be OK. It also is not likely to be used with polysyllabic nouns, eg a small yam is a 'yamlet' but it would be somewhat ridiculous to call a small potato a 'potatolet.' For people the originally feminine diminutive '-ster' is common with titles or names (often with a definite article), eg 'Jim' - 'the Jimster.'

Doggie for dog Kitty for cat Bunny for rabbit Birdie for bird Those are what I can think of right now. And I can't think of any non-animal based ones.
These are generally considered more childish-sounding, but I still use them, mostly just when talking to family. I would NOT expect the animal to be small necessarily if one of these eorks was used. The only other dimiuatives I can think of are nicknames.

Can't it be " the little boy us wearing clogs?"