Just a heads-up that you may now have a revised tree. Mine went from something like 154 skills to 172!

Wow, thanks for the heads up ! The French tree was already revised about 5 months ago when they added about 20-25 new skills.
So this is two major revisions so far this year. Exciting but chances are i'll lose my golden owl like before, until i complete the new skills again !

Today I got upgraded to the new tree with 172 skills and 830 lessons.

Indeed it could be that it is called "tree16" because of the new variables I see in my "extended user profile":

I am still waiting for mine; I wonder when it will be rolled out to everyone?

Count your blessings. The new modules are VERY buggy, with an extremely limited set of accepted English translations. They will probably improve in time, so if you get the tree later on you'll have a better experience than those of us who are struggling through it now.

Oh maybe I should just concentrate on improving my Spanish for a while. That does sound very frustrating.

Indeed. 26 new skills just after the sixth checkpoint. I had my tree golden (all skills at 5 crowns) at some point but it "updated" and was never that way again. I was very nearly golden again. As of yesterday morning I had all except three skills at level 5. Those three were at level 4 and decided that I would have my tree golden again by the end of the day. I was working on the second of those three when mine reset, mid-exercises, and bounced me to a new homescreen with lots of purple skills.

I went to the bottom and did the Big Test (number 8) and got my owl back. This is the fourth time I have earned the owl. Don't know how long it'll take me to get the tree golden again. I estimate 7 weeks at the rate of one hour per day, assuming no further testing out. But that also assumes no new updates. 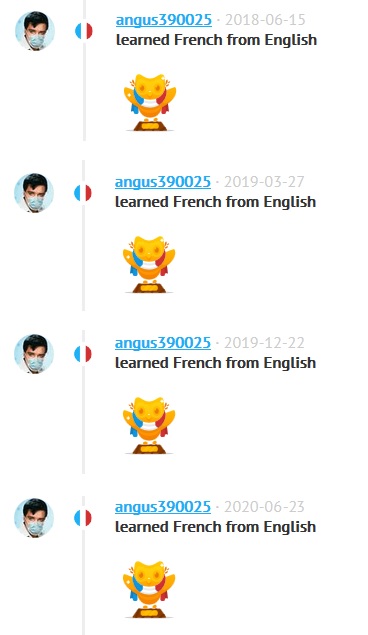 Fierycat has not yet updated his excellent compendium of vocabulary introduced in each skill. The latest French version shows 158 skills, not 172.

I started the first skill, Wardrobe, this morning and noticed a few new words. There are colors such as argenté(e) and doré(e) and fabrics such as fourrure and soie in that skill. La manche is there too, but not as the English Channel. Rather it's just a garden variety sleeve on a shirt.

I'm there with you. I was on track to gild my tree by Bastille Day. Now I'm back at Level 0 on the new skills and won't be done until Labor Day.

Which is just fine if the new modules are good and really teach us something. Having more material is always a good thing. Unfortunately, the new modules seem to be very buggy, with lots of tortured English that should have been fixed long before release. (E.g. DL insists on "the meal from yesterday" instead of "yesterday's meal".) To some extent, that always happens with new roll-outs, but this time feels worse than ever before. (Either that, or the Covid situation has me more irritable and less willing to put up with it than ever before.)

Anyway, here's hoping they fix the bugs soon and give us lots of opportunities to learn more. Because if they don't, it's going to be a really frustrating summer.

They're awkward--some distractingly so--and the "sentence" forum is full of posts for the past two days. I think that when a new sentence is added for translation, it accepts only one answer. Eventually reasonable alternatives get added to the database. Just report them when your sentence is correct. I reported about 20 yesterday.

Yeah, I'm reporting my share, sometimes several for a single sentence. E.g., of "Be quiet while [I talk/I'm talking/I speak/ I'm speaking]", only one of the four was accepted, and I reported the other three. The time sink of having to repeat such a sentence isn't a big deal, but the frustration and anger that goes with it completely throws me off my game. DL works through gamification --- making language learning fun --- and wading through these modules is no fun at all.

Fierycat should have all the lingots for that compendium.

Oh thanks for the warning! I don't have the update; my French tree has 158 skills and 792 crowns. I've got 4 crowns to go to finish the tree. I've gilded the tree before as well. I think these updates are great as nothing teaches vocabulary as well as Duolingo. Wish we could have some control over when we start the update though.

Thanks! Although, I haven’t gotten far down enough to see much difference in my tree, haha!

Since they removed/replaced some skills, then does this mean some people will have a much higher crown count if they have completed the removed skills?

Like, if you already received crowns from the removed skills, and then you do the new skills, then will you have a significantly higher number of crowns than people who haven't completed the old skills? (Like 90 crowns more, assuming 5 crowns per skill?) Do you get what I mean?

does this mean some people will have a much higher crown count if they have completed the removed skills?

Yes. If you hang around here long enough to see several updates, then you will end up with far more crowns on your duolingo French tree than is "possible" according to duome. 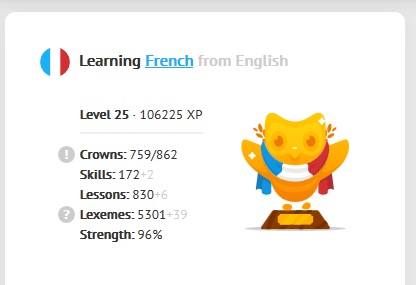 It's worth noting that when duolingo made the leap from Tree8 to Tree12 (the first update after the initial crowns update) the moderators made a sticky post assuring users that they would not lose crowns. For example, if you had 200 crowns, and the new tree omitted 8 skills for which you received 40 crowns (8x5=40), you would technically still have those crown. Only 160 of them would show up on duome because of its algorithm, but the duolingo software keeps a running total of all your crowns. I no longer see that message in the sticky spot but I think that this policy has not changed.

That post was from a French course moderator but it was not specific to French. In my Spanish course I also have far more crowns than what shows up on duome. I think that will be the case in any course in which an update causes a skill you completed to disappear.

It's somewhat ironic. Two years ago, when the "crowns" system was unveiled it was widely unpopular. This forum was choked with threads complaining about the crowns system. I complained about it myself. I guess it caught on. Maybe people became emotionally attached to their crowns and it may be why they made that policy.

I have no regard for crowns. Levels and skills only.

Thanks for those explanations. I'm quite new to Duolingo, mostly focussed on learning Russian and improving German and Spanish. But also, by way of a break, I like to test out of languages I already know quite well, i.e. French and Irish. So having finished L1 French and begun working slowly up to L3, I was surprised to see changes in my status that I couldn't understand at first. So I noticed the new skills and began working through them. Then I noticed the discrepancy in crowns between Duolingo and Duome and even went to the trouble of counting them one day! So your explanation is very welcome.

I've had that for about a week. It's a bit demoralising to see it in some respects, as it means I've got about 20 more skills to level up, and I was so close to getting them all to level 2.

thanks for letting us know. How do you discover these important facts?