One *minor* criticism of the Finnish course

I know it's still not fully complete, but the Finnish course doesn't have an on-screen keyboard to input accents. I know it's not a major deal, but it bugs me a little...

Please click on link for how it looks: https://imgur.com/a/4i23TCE

One option for now is to install a Finnish keyboard layout. This is available on mobile devices, PCs, Macs and Linux. On a physical keyboard with the Finnish layout selected, the Finnish letters are to the right of the L key, first Ö then Ä. In Windows, pressing the windows key + space bar toggles between installed keyboard layouts. Other OSs also have a hotkey for toggling but I am only familiar with Windows. I find it very easy to toggle between the US and Finnish keyboards this way.

In the version of Android I'm using, the Google keyboard even has an option for Finnish.

and Alphabet (Gboard – the Google Keyboard).

i agree it is a little frustrating

We have requested the keys for umlauts and they should be here in few weeks. If you are on a mobile device, you can have several keyboards at the same time and swap them with a single tap, or you can use the international keyboard and press keys a bit longer to get more options available. If you hold onto A, for example, you'll get a selection of letters including Ä to choose from. So please go to your settings and see what your phone or tablet can do. Most computers also have quick ways of changing keyboards or producing letters you cannot find in English.

Also, they are not accents but letters on their own. A and O are pronounced at the back of the mouth, whereas Ä and Ö are pronounced in the front part. If you ignore them, you'll end up with something that's completely foreign to the listener, or something that means something else. Väinö is a name, but vaino means "oppression". :)

Another example of what can go wrong when you ignore the ä and ö letters: 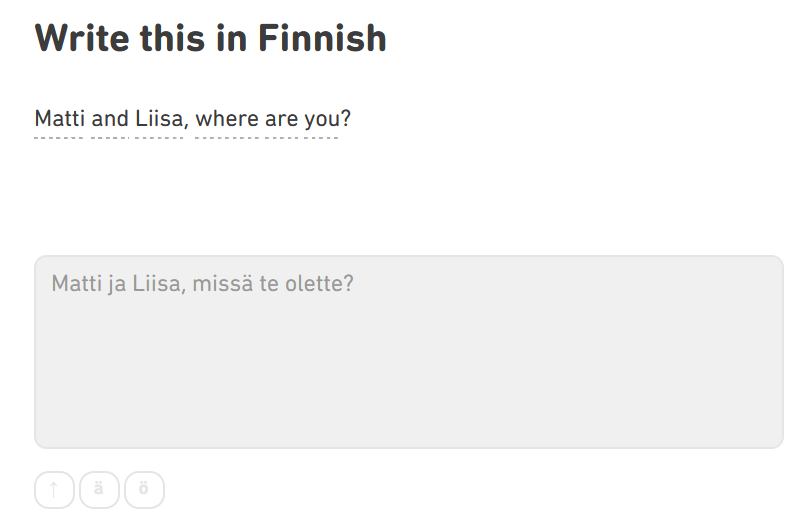 Is that only available for early chapters? I haven't seen this yet.

Hmm, I see now that it's only available on the beta website. Sorry!

Why do we need these? é, š, ž I haven’t seen an exercise requiring these letters.

I haven't tried the course yet, does it still allow the answer to be accepted if you don't type the umlauts (with the standard "Pay attention to the accents" warning)? Or is the course, in its current state, /unable to be completed/ by someone without the ability to change keyboards (using Duolingo from a library computer, for example)?

From my understanding and experience with other courses, it's an accessibility requirement of Duolingo that all courses can be completed with only a standard US-English (ASCII) keyboard. Languages with accented letters (for example, Spanish and Turkish) have to accept answers without accents, including "expanded" spellings (in Turkish, "Turkche" must be accepted as an alternate spelling of "Türkçe", for example). Languages that don't use the latin alphabet at all are expected to add latin-alphabet alternate answers (Russian and Ukrainian having to accept non-cyrillic answers, although the Ukrainian course is a bit picky about /how/ you romanize the word...)

The part that I'm unsure of is, is that accessibility requirement baked into Duolingo itself (the site backend automatically determining if an ascii-only answer is a match to a "converted" version of the native-language expected answer, which would explain Ukrainian being "picky" about the romanization), or is it something that course creators have to do manually, on a case-by-case basis, for every single sentence in the course (using your example, having to add an entry that "vaino" is a "permitted alternate spelling" for "väinö"), in order to be compliant with the apparent accessibility requirement?

For me, using ipad it is a little, just a little tiresome. When the language that you should write in switches from Finnish to English, you get a Finnish text to key in. That text may contain names etc containing ä and ö, which are not supported by the English character setup. When going the other way there is no such problem as the Finnish character setup contains all English characters. The first thing you have to do when duo lingo switches from Finnish to English is thus to manually switch the keyboard back to Finnish to be able to write Finnish names correctly. This will not disturb the order in Duolingo at all.