My question: does anyone know an online bookstore where we can buy comic books written in Finnish (Suomi) and have them shipped to Canada?

I love learning languages with comic books (for example, with Tintin, Charlie Brown, Astérix translated into Spanish or German). However, so far, I have not been able to find any online bookstore selling comic books written in Finnish (and shipping them to Canada).

Thank you in advance for your help.

Akateeminen Kirjakauppa is a Finnish bookstore chain. You can order online (www.akateeminen.com), I think. I'd be afraid of the shipping costs, though.

Ei mitään. Get K. Korhonen's 'Finnish Nightmares' books. They are pretty funny explorations of the language & culture. They have a 'comic book' feel - they evolved out of a blog or website, I think. www.finnishnightmares.blogspot.com sells them in Finnish or English (& might have other comic book stuff available).

There is Aku Ankka, which is a weekly small comic "newspaper" and they also make monthly comic books, but I don't know if you can get it outside of Finland.

But if you don't mind to read on your computer they have some free comics avaible on their site.

It's a shame we can't get Aku Ankka here in the US. I read it as a kid when visiting relatives in Finland but now I can't find any for my kids. None of the websites I've seen ship to the US.

Here is a gorgeous webcomic for free! It's by Minna Sundberg, known in the Duo forums because of this beauty: 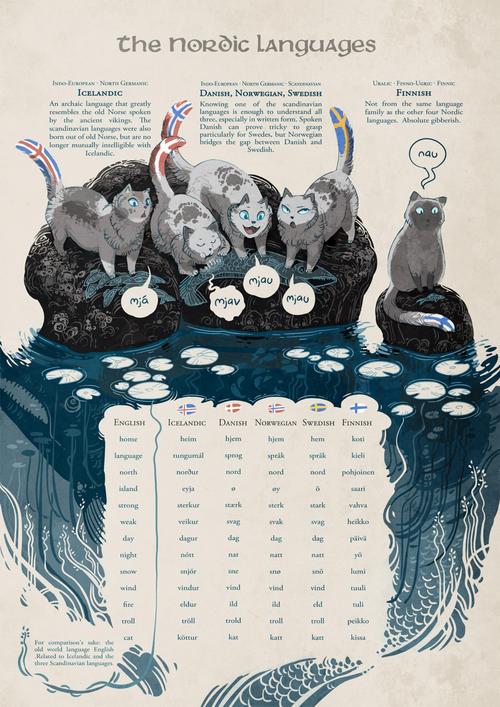 Thanks for the reminder, I haven't finished reading the comic yet (so little time, sadly), I should return to it.

I think Booky delivers outside Finland, though I don't know if that means everywhere; https://www.booky.fi/

If you're not against used books, you could try antiquarian bookshops. The sites are in Finnish though, so be prepared to work a little! For example antikka.net , antikvaari.fi and antikvariaatti.net have several sellers. You could try contacting some to find out if they can be persuaded to ship to Canada. Here are some that specialize on comics: sarjismesta.fi , kulkukatinpoika.fi and antikvariaattimakedonia.fi (this one's rebuilding it's site atm though).

Oldish French and Belgian comics like Tintti (Tintin),
Asterix, Lucky Luke, Piko ja Fantasio (Spirou et Fantasio), Valerian and Corto Maltese (though Italian, but still a masterpiece) have been widely translated to Finnish, and there are probably lots of old copies going around. The most popular comic is still Aku Ankka (Donald Duck), which has been praised for its translations and it's even said that it's thanks to Aku that Finnish kids learn to read so well (not sure if that's as true nowadays). I'm not completely certain if Aku is the best place to start for a beginner language learner though, since the language is pretty varied and special.

If you have no luck with these, you could always try if Amazon or some other international seller might have a few copies of Tintti, Tenavat (Peanuts) or Asterix for sale in Finnish.

I just ordered a few books on the Booky website. Apparently, they do ship books to Canada (which makes me very happy). :) Now I am waiting for my Vegan cooking book in Suomi and my "Astérix le Gaulois" adventures in Suomi as well. Can't wait. :) Thanks for your help!

Great! I hope your books arrive safely and quickly, and that they'll be worth it! Probably no wild boar recipes in the cookbook then, like how Obelix likes to eat them...

I think Fantasiapelit at Fantasiapelit.com and Turun Sarjakuvakauppa at sarjakuvakauppa.fi both send orders abroad. Especially Turun Sarjakuvakauppa could be a good place to check as they're an actual comic book shop and I've bought some Finnish comic books from them. For example a category called "Sarjakuva-Finlandia" in their online store includes comics that were nominated for a big comic book prize here last year. Fantasiapelit is also good, but their selection leans more towards English and basic super hero comics even though they might also have some Finnish comics in their selection.