So this sentence does not make sense to my English brain. Does it figuratively, though not literally mean breaking up with my girlfriend? Or does it really mean off the girl, as in "OMG You are sitting on the girl! Get off the girl!"

"please take the muddy boots off the girl before she tramples it in the house."

Okay, that makes sense now. I answered den, thinking it was “of the girl”. That was accepted.

It means off the girl, of the girl, and from the girl. All equally. You would easily know which meaning in a given context. The point of the exercise is probably just to learn the preposition. And that it lenites (adds a 'h' after most consonants).

I love how as soon as I hear a sentence on the Irish Duolingo that is not completely bog-standard, I know I'm going to see 20+ comments below it.

I'm having trouble hearing the difference in pronunciation between "cailin" and "chailin", anyone have a good ear for this one?

"ch" has the same sound as in "loch", or the German pronunciation of "Bach", if that helps.

That feels awkward because in German "ch" is a hard stop. In order to make the word "flow" I tend to gloss it instead of making it hard. I guess the key part that both you and DanF1220 is that it's got some "back of the throat" sound so it. Tricky tricky.

I read two different descriptions that helped me. One said that K is a closed sound, whereas ch is an open version where you continue to blow air - I sort of started to get it from that. And then another one said, "make a K sound, but blow air across the roof of your mouth while you do it," and that one made it click. The actual K part of it is much softer, I think, because you can't get that full K sound without the hard stop.

Don't know if that will help you, but it helped me! I found this whole guide very helpful in general for trying to learn the various consonants, especially broad and slender: http://angaelmagazine.com/pronunciation/introduction.htm

The German ch is far from a hard stop. Only in the beginning of words, in southern dialects it is, otherwise it’s a so called fricative. After back vowels (a o u) it’s pronounced /x/, which is the sound that is to k as f is to p, and as s is to t : it is pronounced with the same tongue position, but instead of stopping the airflow completely, you let the air through and cause friction, resulting in an almost hissing or scratching sound.

Now, in German it’s a bit more complicated than it seems to be in Irish, because there’s the distinction between the ich-sound /ç/ and the ach-sound /x/ (which I’ve just described). Irish has, as far as I know, only the latter.

A slender ch in Irish that isn’t surrounded by vowels is also /ç/.

@ saschambaer: No, Irish too has both the ich-laut /ç/ and the ach-laut /x/. The first is the palatal ("slender") consonant to be heard in, for example, chéad (first), and the second is the velar ("broad") consonant that occurs in, say, bocht (poor).

I put "from the girl" so as to make sense to me and it counted as correct. Guess it is all about context.

Is this the conjugation of "Ag Dul"?

Actually it seems "of the girl" and "off the girl" are both considered as right (perfectly right, not as a typo). Does that make any sense to you, native English speakers? (I'm a native French speaker)

It doesn't have to make sense to English speakers. Prepositions rarely line up one-to-one anyways. In this case, de can mean "of" or "off"

That is a great point, galaxyrocker - once you realise that prepositions work differently in different languages it is easier to accept how they do work in another language. Thanks for the reminder.

They both seem ok to me, e.g. "Clarisse is the name of the girl" and "A tree branch has fallen on her; get it off the girl" (though some might say the latter should be "get it off of the girl")

WHere are the Tips and Notes? I cannot find them!

Scroll down before you start the lesson. (But if you're on a smartphone, they're not available there.)

I've got through the whole course without ever knowing they were there on the website, as I've only used a smartphone. It's meant a lot of it has become instinctive to me now without having had to know exactly why, although it was quite maddening in the beginning

I'm sure it will be covered later, but is this one of the ways that the genitive (possessive) is formed? "Den chailín" = "Of the girl" = "The girl's" ?

Not usually. Irish has its own genitive case that translates possessive forms.

I actually wish it would accept "the girl's" as an answer to this sentance- that is how I would translate it into English.

But that's not how it would translate. You would use the actually genitive case to translate "the girl's"

I think this might be a case of American English vs Hiberno English differences.... for me "of the girl" is the same as "the girl's" in English so while I get the difference regarding the genitive vs not in Irish I end up frustrated by needing to rethink my English.

Can someone explain to me how to use words like chailin,cailin and gcailin

There is an explanation in the sections on lenition (https://www.duolingo.com/skill/ga/Eclipsis) and eclipsis (https://www.duolingo.com/skill/ga/Lenition). Unfortunately my brain just threw up its hands at that point and I just went with, "Move along and come back to this later after you've been doing it for a while to see if it makes more sense later on." Bit by bit, it does sort of start to make sense, believe it or not.

The explanations are at the bottom of the first page on a particular section, and I sometimes don't even notice them there until after I've done the lessons and am wondering just what's going.

This probably isn't the right place to suggest this, but I don't know where else to mention it. I hope once this is out of beta, there might be more exercises on lenition and eclipsis, like a part 2 the way there are with other sections such as verbs.

While I'm at it, I'd like to see more examples of the genetive, since the same sentences keep showing up in the review and I think I'd kind of just memorized them without reading understanding it all that much. I've read the explanation and it all seems very arbitrary and I keep waiting to see "except on the 2nd Tuesday of months that end with y".

Alternatively, if anyone knows of anywhere there might be some very repetitive exercises offered elsewhere online, that would be great.

Sorry for co-opting your question like this but, since you mentioned it, that's something I've kept meaning to ask anyway.

Off the girl, off the backboard, nothing but net.

I can't hear the difference between den and don on the audio.

Does anyone have a phonic spelling on the first word. Im having trouble picking the sounds out while heari g it

This was my first time having difficulty with first sound. Just guessed it was (den)

Apparently both. If the writers would point that out and reinforce it uniformly, it would prevent a lot of learner confusion, imho.

What is the difference between chailín and cailín?

If den chailin (can't find how to add accent mark for the second last i) means .off THE girl'. Why is it lenited? I thought only feminine nouns were lenited after the definite article - 'an'. Cailin is a masculine noun. I may be missing out on something here. Would appreciate a comment or two.

There are many grammatical instances in Irish where lenition is needed; a noun following den is among them.

Thank you. Yes, I see this now - I had not read Tips under LENITION carefully enough. It is there under Point 6 - Prepositions.

Den as in kill (ex: the man offed the theif) or as in take off (ex: she takes the necklace off)?

In this sentence, den = de + an, and de is a preposition rather than a verb, so only your latter example would be correct.

They want to kill the girl?

No. Den is a combination of preposition and article that can mean either “from the”, “of the”, or “off the”. It’s not an imperative verb, as “off” is in its idiomatic “kill” meaning.

I can't think of a situation where "off the girl" could not work the same as "off of the girl". The "of" should be accepted

I typed "of the girl" and it marked me wrong as "of the girlfriend" but the translation here says "off the girl"... very confused

Writing this as a sentence makes this confusing. Is it a sentence ("kill the girl") or a prepositional phrase?

Shouldn't this be 'of the girl'? I'm confused about this translation. The tip says "Of or From", so why is it off?

I'm sure that a million other people have noticed this typo. "Den chailín does not mean "OFF the girl"--it means "OF the girl". C'mon, Duo! Clean it up!

Luckily for everyone involved, the contributors who created this exercise know a bit more Irish than you do. There is no typo - de can means "off" as well as "of". 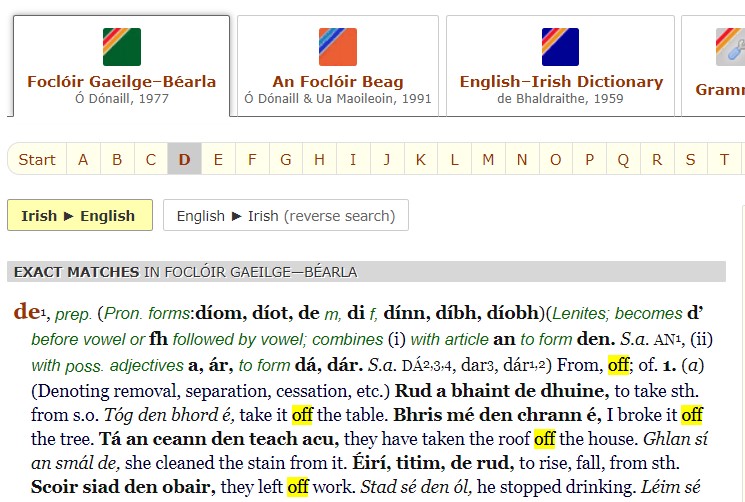 'Den' is of or off? Typo somewhere?

Please read the other comments before posting an inaccurate comment about something that has already been clarified.

There is no typo - den can mean of or off depending on the context. The Englishs word "of" and "off" are both derived from the Middle English word "of". 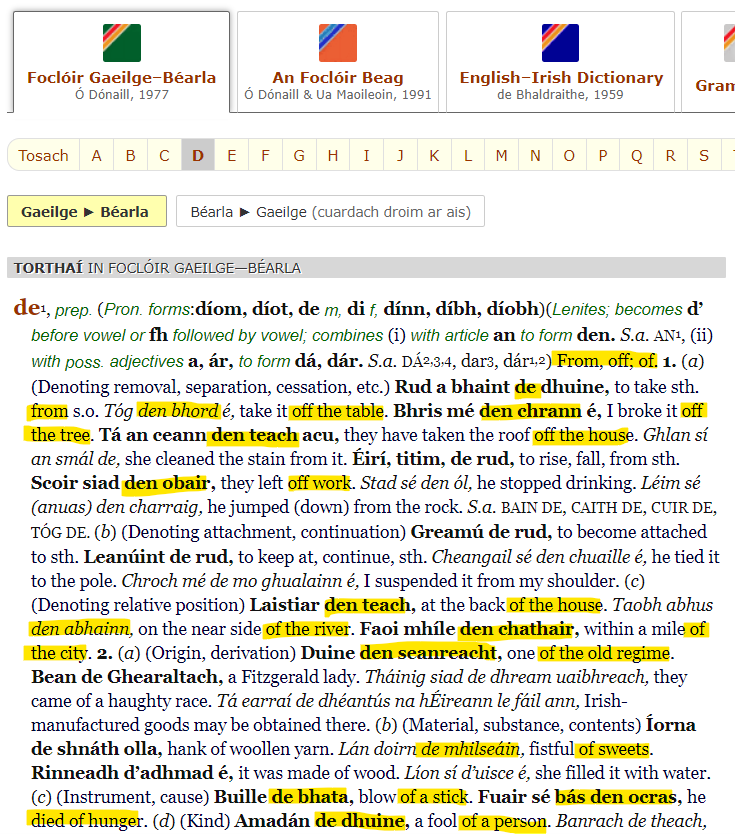 It always sound like to me, she is saying "do" instead of "den". Anyone else, or is it just me? It is not the only one where I feel it is difficult to understand what she is saying.

This is not a spelling mistake. Please read the other comments where this has been explained already, multiple times.