Translation:Republic of Ireland or Northern Ireland?

And Ireland, long a province, be. A Nation once again!

Would this be an awkward question for a visitor to ask? Seems loaded to me.

I'm forgetting one of my grammar rules here, why is the Ireland in "Republic of Ireland" eclipsed while the second one isn't?

It's not actually an eclipse (vowels don't eclipse), it's a h-prefix. It occurs in this case because the genitive singular of a feminine noun uses na rather than an for the definite article, and when the noun starts with a vowel, you need something between the vowels.

Ahh excellent, thank you for clearing that up! I think I'll study that webpage you liked as well, seems like I need it.

My answer of "The north of Ireland" wasn't accepted. Would that not be ok?

Great discussion and all, many good points..but ..still i got marked wrong for writing the Republic of Ireland.. ah come on duo!?

Should the word for or be pronounced nu or no?

It's more like nu in Connemara. Not like the English pronunciation of 'no' anyway, which is more of a diphthong; Irish vowels are purer, more like Italian.

Why can't you call the Republic of Ireland the Irish Republic? It's the same thing, just with the words reversed and easier to say.

Because the Republic of Ireland Act of 1948 says so.

I wouldn't if I were you. As a previous poster has said, it's not called such in the constitution. Also, 'Irish Republic' refers to a previous state and is often used only by those who do not recognise the Republic of Ireland's right to be called 'Ireland'. Other terms used to avoid this are 'Southern Ireland' and 'Eire' (often spelled without the fada over the e). Additionally, this is why you should mostly avoid using 'Éire' while speaking in English. Naming for the country of Ireland has been a contentious matter in the past, particularly with the UK. To be safe, while speaking in English, refer to the country as 'Ireland', or if you want to differentiate, 'Republic of Ireland'.

Irish Republic refers to the state that existed in Ireland between 1919 (when Ireland declared it's independence from Great Britain) until 1922, when a treaty with Britain established it as an independent state. The new state was known simply as the Irish Free State until 1937, when it ratified its constitution, thus becoming the Republic of Ireland.

The 1937 constitution did not create the Republic of Ireland. Ireland wasn't declared a Republic until 1948.

Thanks for this sentence Duolingo mods :) for those that wants to learn Irish this is an important and relevant sentence

PatHargan already answered that question - nó is pronounced differently in different parts of the country. This is the Connacht pronunciation.

speaking of greography, i know that in american english one can sort of hear dialectical differences (accent in pronunciation) in music that is sung of say someone from the south compared to say someone from the west coast (not always, but sometimes), so i am wondering if it is the same in ireland ignoring word differences. so, is it possible to hear a dialectical difference (pronunciation) in sung music from say the belfast area compared to say the galway area?

In general, yes, when people sing in Irish, you will hear regional differences. If you listen to different recordings of traditional songs like Dúlamán or Cill Chais, you can often pick out regional aspects of the singers dialect (unless the singer isn't an Irish speaker and learns the song aurally, by mimicking another singer or recording, which isn't unusual).

There are also different styles - for instance it's hard to imagine An Poc ar Buile as anything but a Munster song.

The 'á' sound in the north is very recognisable, for one thing.

Just curious, as an English person who's never been to Northern Ireland, how common is it for people there to speak/understand Gaeilge? I've always imagined it's hardly used as it's technically part of the UK (speaking purely factually, no comment either way on how it should be), but I've never really thought about it.

The Good Friday agreement specifically referred to "the importance of respect, understanding and tolerance in relation to linguistic diversity", and there is recognition of Irish as a minority language (though it doesn't have the same legal status that Welsh has in Wales). Unfortunately, it is often seen as a "green versus orange" issue, with strong support from Nationalist politicians and strong opposition from Unionist politicians, though at grass roots level, there is some interest in the language in traditionally Loyalist communities. Traditionally, Irish was only taught in Catholic schools.

There is a "Gaeltacht Quarter" near the Falls Road in Belfast, but outside that, as with most of the Republic, you probably won't encounter spoken Irish unless you actively seek it out.

Here's an article from The Economist that touches on some of these issues.

Well, since Northern Ireland might be joining with Ireland soon, neither.

The chances of Northern Ireland uniting with the Republic of Ireland haven't changed significantly in at least a generation. There was some naive commentary from people who don't know much about the situation in the aftermath of the recent UK referendum, and a bit of coat-trailing by some people who should have known better, but the outcome of the referendum in the NI constituencies didn't break any new ground - a majority of Unionsists voted to leave, a majority of nationalists voted to remain. The only way that the Brexit vote will change the constitutional status of NI in the UK is if Little Englanders vote with their pockets, and cast NI adrift, because they are tired subsidizing it (and Little Irelanders know this, and have no interest in stepping into replace those subsidies, and Little Ulstermen know that, which is why they voted to keep themselves onside with the Little Englanders).

Some inconsistency here. "THE Republic.... " accepted, but previously "THE Gaelic Athletic Association" was not !!

"Poblacht NA hÉireann" - the "na" in that phrase is explicitly the "the" in "the Republic of Ireland".

I thought "na hÉireann" was the genitive and nothing to do with the definite article.

No, the genitive of "Éire" is "Éireann", though because country names are definite nouns, you are less likely to come across an unadorned genitive "Éireann" (most of the examples on Tearma.ie use "na hÉireann, or don't include it at all in the Irish translation, but they do translate "Ireland’s Professor of Poetry" as "Ollamh Éigse Éireann" and I'd suggest that "Ireland's Call" would be translated as "Gairm Éireann" rather than "Gairm na hÉireann").

Thanks for your detailed reply. I get your point.

Is there a reason that it doesnt accept "The Republic of Ireland and Northern Ireland"?

Ugh, not that part. I kept doing that, too. Duolingo won't accept "The Repubic of Ireland," only "Republic of Ireland." Sorry about that.

It accepts "The Republic of Ireland or Northern Ireland?" for me. 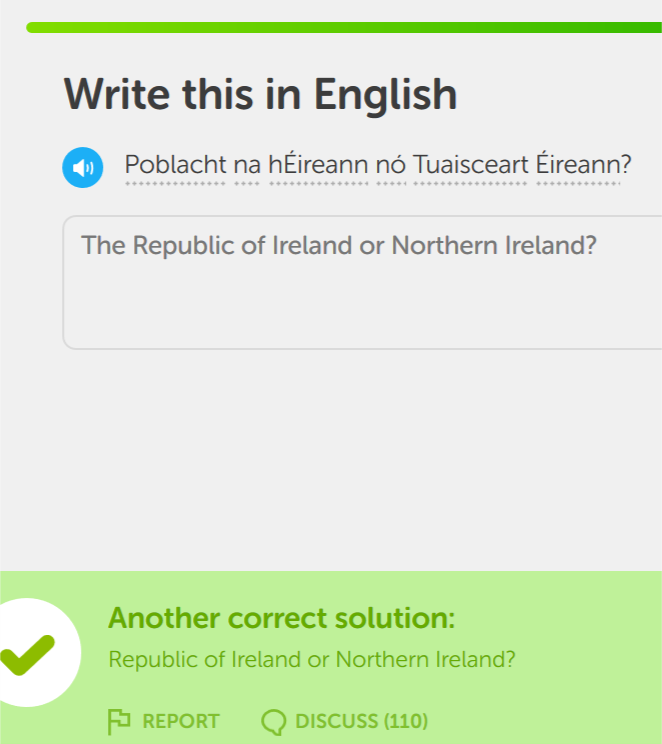 How are you supposed to tell the difference?????

What do you mean tell the difference?

Learn Irish in just 5 minutes a day. For free.