Translation:The duck does not eat the soap when it swims in the water.

Yeah, I don't think that it was in water. (Probably something with a high alcohol content).

I thought it did! It keeps dipping its beak in the water: 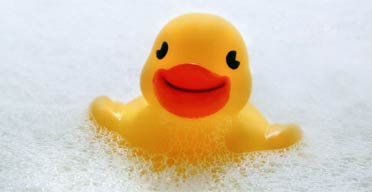 The first time around, I try to understand these sentences without reading them. But I would probably have trouble believing I heard this one right if it were in my mother tongue.

Is it the soap swimming or the duck? No clear DL :0

I think the duck.

If it were the soap, it would be "sin" not "den", referring to the most recent object (the soap)

Good for the duck!

What the actual duck...

It doesn't eat soap when it swims in the water but does it eat soap elsewhere?

Does anybody else have this problem? That's the third time in this exercise that the word I need is not in the list!

why the use of "den" here as the subject of "svommer" ?...... Thanks for your explanation.

Because it is the normal pronun. the subject pronun for the third person (translation of "it") is den. there is a possible confusion because in english it is neutral while in danish both and and sæbe are common (-en words) and then use the pronun for common names, not for neutral. But being grammatically common doesn't make them persons in real life :

If it was drengen and not anden then the subject pronun would be han and for a pige it would be hun : Han/Hun svømmer i vandet.

Another minor confusion is because the sentence is not clear about who swims in the water, the duck or the soap, but in this situation it doesn't change the pronun.

If it was referring to both of them swimming (The duck doesn't eat the soap while they swim in the water) then the subject pronun would always be the plural "de" (They) : "Anden spiser ikke sæben, mens de svømmer i vandet" or " "Drengen spiser ikke pigen, mens de svømmer i vandet". Here the confusion, again, would be about who is swimming, the boy and the girl or their parents ? But this is going too far.

I hope it helps clarify this bizarre sentence

Oh, thanks Sijette... I think my confusion is because in my mind, a duck is neutral (and soap as well, of course !). So, I had in mind "det"... (excuse my poor English, it's not my mother language).

In English, soap would 'float', not 'swim'. It appears that in Danish 'svømmer' can also mean 'float'. In German (my native language) 'schwimmen' can mean 'swim', but also 'float' (in particular if it the object in question is being carried by the current). Thus, when I was learning English as a boy of 11, I said 'the toy ship swims in the creek' much to the amusement of my American peers.

The pronunciation of Anden is wrong. The intonation is terrible. It is due to the fact that DUO uses the same pronunciation for two different words. 1) the duck and 2) another (en anden). Please fix it.