eet een sounds exactly like eten on this one

'Butter and ham' would be 'boter en ham'. Boterham, however, means 'sandwich'.

I guess it's just one of the thousands of peculiarities that exist in all languages.

I was just imagining a butter and ham sandwich. Never had one.. :o

I imagine that such a sandwich would require some lettuce to add a contrast of textures and perhaps mustard for a tang. A slice of mature cheddar might not be a bad idea either.

I am certainly going to receive a reprimand from one of the moderators for this reply. We are supposed to stick strictly to grammatical discussions.

Why don't i use broodje

Broodje - roll, sandwich or bap. I think your answer here should have been accepted. The most frequently used form is 'boterham' though.

Why is wrong "i eat ONE sandwich"?

Boterham is also a piece of bread

Not also, that is just the exact meaning; a single slice of bread (from a loaf of bread).

This is een boterham met kaas (the most common topping) 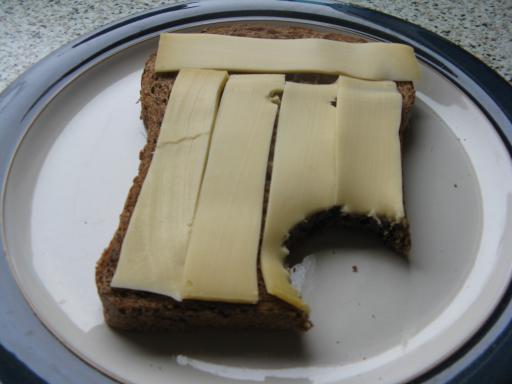 It isn't a sandwhich but definitely doesn't mean toast either. Not until you have toasted it anyway.

It's just a slice of bread. I posted pictures in this thread.

And een tosti is two slices of bread with cheese (and sometimes ham) put in a em well not a toaster...
Originally we had a tosti ijzer (two pieces of cast iron that could be clamped together and put on the gas/furnace) but now we have a tosti apparaat, which I think you guys might call a sandwhich grill. Which you can just plug in. Anyway a tosti is a grilled cheese sandwich.

It sounds like Ik is een boterham. How can you tell the difference?

i want somali languege coz my english is not good

Can it also be, I ate a sandwich.

Can it also be, I eat a sandwich.

"Brood" means "bread" and it gives us the diminutive "broodje" which is another word for "sandwich" - and I think one that is easier to remember than "boterham".

Also "boterham" is literally "butter +ham". Wouldn't vegetarians prefer to use "broodje" - or am I ignoring how words acquire an identity of their own, whatever their components are?

The word has nothing to do with ham at all.

The first part does come from butter but actally as buttered and the second part is likely from homp meaning chunk or lump (english doesn't have an exact word for it, they do have hump that came from the Dutch homp). So basicly a buttered chunk of bread. (Ow ofcourse there is hunk which actally comes from homp too and does have a similar meaning)

(Also een boterham isn't really a sandwhich, just a single slice of bread with or without topping. Een broodje is a breadroll sliced open with filling/topping so can be called a sandwhich but I think more often is called things like a sub (or hero or hoagie) but that will depend on the country and region of the English speaker. Sandwhich as in layered slices of bread (that may or may not be cut diagonally to make a triangle) is called a sandwhich here. But you won't find them often here. Your best shot is a gasstation prepackaged)

When to use eet and eeten?

What is the difference betweehn eet and eten???

Could it be translated as "I am eating a sandwich?"

Whi is it not eten

This is a weird thing to say in English

It could be an answer to "Your work doesn't have a microwave? What do you eat every day at lunch?" "I eat a sandwich."

I eat a sandwich

What does eet means

"eat" when used with ik

All with ik / i didn't works

Of course not, "ik" is the word in Dutch. "I" only works in English. The conjugated verb "did" and negative "didn't" should be followed by the bare infinitive "work".

I eat a sandwich

Duo's question here is 'I eat a sandwich' though.

In this section, I am getting a mesage that my answers are wrong even if i type the right answer..

Will anyone on here be my friend

I think I write a correct translation

I wrote the right answer and they say im wrong

I am writing the correct translation still its showing wrong. Not able to continue

Thats exactly what I have answered with.

But the ham in boterhamas nothing to do with the meat.

It most likely etymology is it come's from homp meaning chunk or hunk which actually comes from the diminutive of homp.

The meaning originally would be buttered chunk of bread.

What the hell? Im right but still wrong???

It speaks so quickly

"Boter" is Dutch for "butter".

It didnt give me a chance to say anything

It didnt give me a chance to say anything

The app doesn't pick the sound

So what is it?