49 Comments
This discussion is locked.

Caixa means "company" in Japanese which is Kaisha :)

Caixa is the name of a company in Brazil :)

Será que é um banco? Is it a bank?

Now that I think of it, I do not know why so many banks are called «caixas». XD

Some German banks are also called [Something]kasse. I guess it comes from the history - some banks started as nothing more than a safe deposit for the money. After all, when you think about it, it makes more sense than "bank", which is just a bench.

Sounds random but "box" (boîte) and "company" are basically the same word in French (:

Really? What do you mean "basically"?

Well you might as well say "entreprise" or "société", though "boîte" is more used in informal settings!

Shouldn't "it's my register" be acceptable too?

earlier on it was "teller", why not here?

It might? Aren't there some occupations in Portuguese where only the article changes (e.g. A dentista / o dentista)

There certainly are. All «-ista» occupations are «substantivos de dois géneros» or "two-gendered nouns." According to this, http://www.priberam.pt/dlpo/CAIXA, the word «caixa» behaves just as you said. I, though, like to use the word «caixeiro» instead, which would switch the ending too. :)

It's interesting to add that the word "caixeiro" in Brazil is not very common.

It often appears as in "caixeiro viajante", which is a traveling salesman.

I guess Duolingo does not want people to be confused with "the case" as in "situation," which would be «o caso»

We often use "capa" for case. Even for a hard case.

Oh, wow! I had no idea. So do you mean like a hard version of um estojo? Thanks, Danmoller! Sempre a aprender consigo

"Estojo" can be a case too. There are soft and hard "estojos". As kids, we use "estojo" mostly for that object carrying our pencils and erasers among other student objects.

Less commonly, "estojo" can be many kinds of cases, including sometimes musical instrument cases. Probably they're hard ones.

"Capa" normally tend to be a soft cover, sometimes a guitar bag for instance. Capes, cloaks and covers are also usually called "capa".

If the case happens to be a box, then we can call it "caixa".

There are probably many variations depending on context here...

Ooohhhh, I see. I get how a guitar bag could be called a «capa», but I didn't know that «estojo» could be for musical instruments too, haha. Obrigado pela explicação :)

How can I tell the difference? Caixa can mean either a box or a cashier (fem.). I was so close making a mistake there.

One makes a little more sense than the other.

Why not É minha caixa.

It is also right.

Would it be inappropriate to say, "E' minha caixa?" If not, should the articles a or o be used before the pronoun whenever a noun is preceded by a pronoun?

As I understand it, it is common in Brazilian Portuguese to drop the article, and yes, the article always comes before the possessive adjective.

I think maybe this is turned around a bit. The possessive adjective modifies the noun, the pronoun replaces the noun.

The first can tolerate the dropping of the article in Brazil (less so in Portugal) while the second cannot (which is why I just always use them cause you never know when you will need 'em :D).

Using the article is also good practice for when dela(s), dele(s), and de vocês come up (the box of hers/his/theirs/yours).

The second can drop the article.

The article refers to a definite object. The version without an article qualifies an object:

Okay, that seems different than what your co-mod says [linked] here:

None of his examples were predicative adjectives :) (Edited, sorry for my mistake before).

I just added an extra case.

So if Danmoller and Paulenrique are not both mods, then what is the difference (all of them) and why then does Danmoller not have a different colored ring around his avatar (perhaps an animated flaming red one)?

Where was I supposed to have seen this obvious information prior to displaying my abounding ignorance?

And why do I always feel soooo stooopid when Danmoller is around? :(

Okay, at the risk of appearing dense (again) to your response to my joking around with you (perhaps it is not possible between us), I will explain:

I've never seen these flaming things.... how do they look like?? :D

What you call "golden" (and which I would call orange) looks almost like it is a flaming ball (though I do understand it is a world, those are not often represented in those colors). After our exchanges here 4 months ago (coupled with those on several other threads; that I walked away from to lick my wounds) I thought the new DL Mod apparel was humorous when I first saw it.

Or I guess it could be a guy with a goofy hat/hair and funny nose trying to kiss someone else on his/her nose...

Do you see them both on your own comments sprinkled about the site like I do on yours?

I figured the mod part out (the word "MOD" also helps when I get really dense). What I did think though was that the "golden" flaming globes (climate change after all) now designated you as also "course contributor" as you explained in one of the other comments here a few months ago.

But there are other classes, such as the non-ringed "course contributor" (which I am), and the same green ring "global mods" (which have access to moderating all the forums instead of language specific ones).

So there is still no visual designation for course contributor?

And how do we tell a local forum from any other when the green rings seem to cross all forums and profiles on the site?

Congrats on your step up to Flaming Global Mod. :) :)

Of course I meant "predicative", sorry a lot.

Yesterday I was thinking about it and I realized I was going around too much about correcting little mistakes.

If on one hand it enriches our knowledge, on the other hand, it may sound like making people feel bad.... :(

What is the right dose?

But there are other classes, such as the non-ringed "course contributor" (which I am), and the same green ring "global mods" (which have access to moderating all the forums instead of language specific ones).

...and why then does Danmoller not have a different colored ring around his avatar (perhaps an animated flaming red one)?

Seems my suggestion had merit with the recent changes on DL and you have a flaming red ball (though not animated) to designate your position now. :D

However, why is your ring sometimes flaming and other times green (even old-style)?

Sometimes there are both styles, at the same time:

And sometimes there is none? 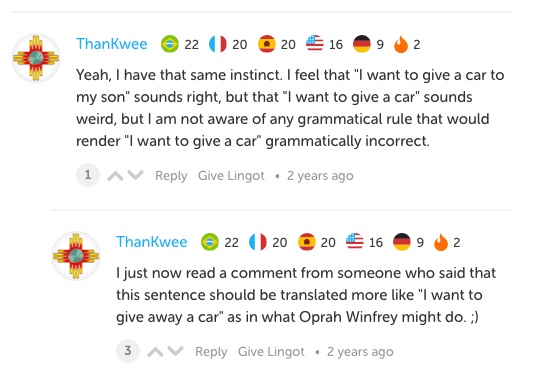 Will we get an intro to the new mods (and even the old ones) at some point? Or did I miss that too?

~~
I still do not fully understand the differences between my point and the link to what your um... (dare I say it again?) co-mod was explaining (though I do get the difference between my and mine).

I've never seen these flaming things.... how do they look like?? :D

Does it mean money box, cashier box or any other boxes also call caixa?

We cannot tell what kind of box they are talking about from this sentence. A "cash register" would be «caixa registradora», but it is also commonly called «caixa» for short. I do not know what a "money box" is; I have never heard that term before. If you mean something like "piggy bank," that would be «o mealheiro».

This is a money box (used at garage sales; table sales like for farmers markets; and maybe even a lemonade stand). 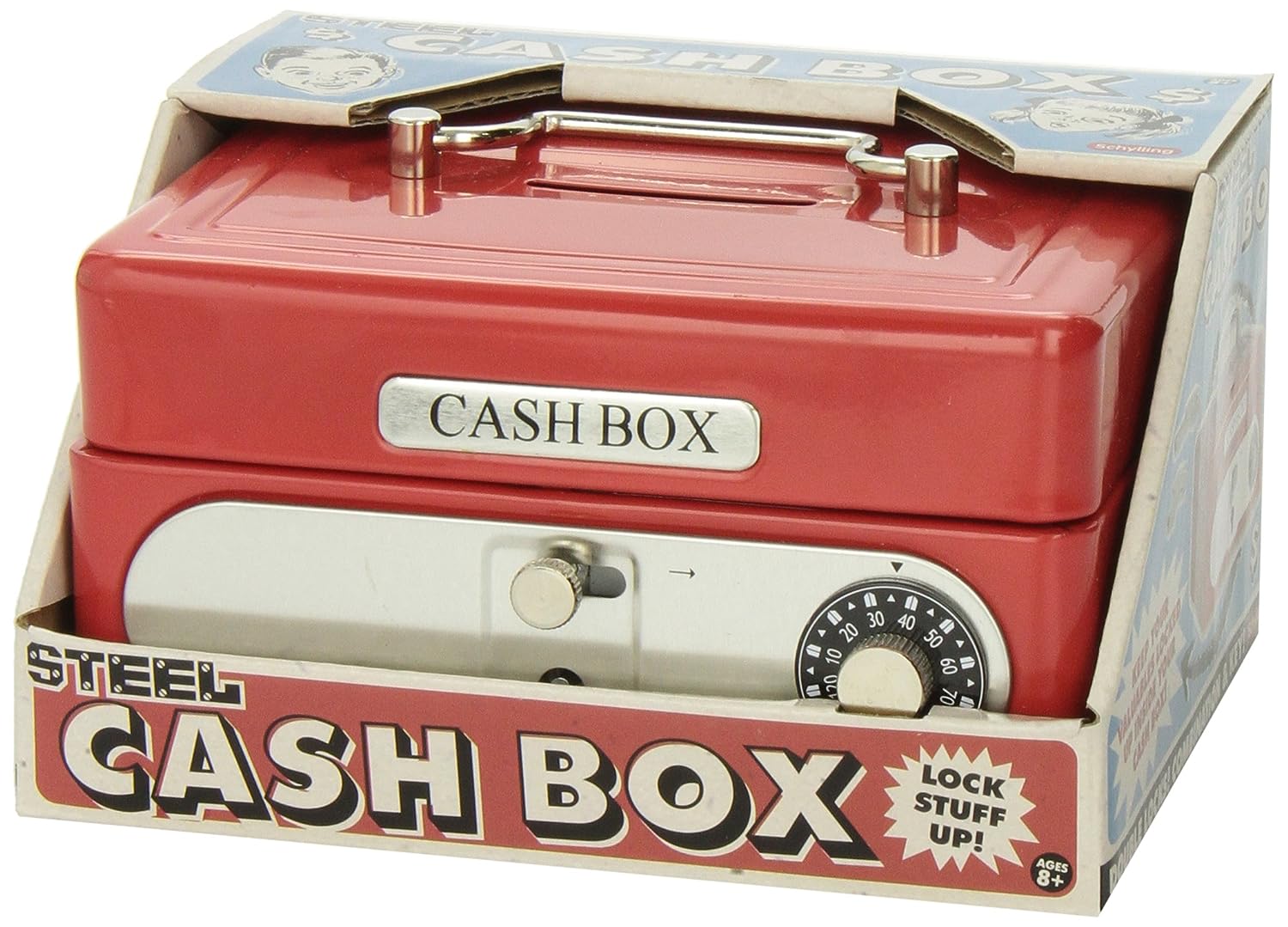 Aahhhh, I've seen those before, lolol. I didn't know that there was an actual term for that. Thanks, scutigera. It looks like a little safe; sendo assim, it would probably be called a «cofre» or «um cofrezinho», @williamleo2

When i was in brazil i saw caixa everywhere...mostly at the bank ..and also at the supermarket..at the department store..at the drugstore..at the makro..at the stadium..well it was full of " caixa" here, there, and in the middle of nowhere. Whenever i saw this word i checked my wallet.

It might have been for 'caixa eletrônico' (ATM), that seems the most logical at least :)

What does "caixa baixa" mean?

Why is "it is my cashdesk" wrong?