And if you're thanking multiple people: "Go raibh maith agaibh!"

go raibh maith agat i was just wondering that

So..go raibh maith agat is correct too? But singular?

actually, that is exactly what they say it should be, now

I threw in a different form of thank you just for the heck of it, but it was marked wrong, oh well,I get it. I said M'as é do thoil é which I learned previously was a variation....??

They never explain how to say thank you but expect you to know it, I don't understand.

They're supposed to give you the "peekable" option first, or at least that's always been my experience. I suppose that can be considered a glitch.

"Go raibh maith agat/agaibh" literally means "May there be goodness at you" or "May you have goodness" (Irish says "to be at one" instead of "to have"). As to why that means "thank you", there are all sorts of ways to express gratitude, and each language has their own way that fossilized into a stock phrase.

I would just use

Why is that 'maith' is pronounced 'mahh' here and 'mwahh' in maidin maith? Anyone?

It's spelled mhaith in Maidin mhaith, which is the lenited form, thus changing the pronunciation.

When you use an adjective after a feminine noun (like maidin), the beginning of the word often changes its spelling and pronunciation. In that situation, m-->mh, which sounds like w or v, depending on the following vowel and what dialect the speaker speaks.

My da always pronounces maidin mhaith as /mA-jin moy/, but then that's Belfast for you

For some reason, it's not accepting Go raibh míle maith agat now.

I’m the farthest you’ll find from an expert here, but I think “mile” means “a thousand”. By extension, that would mean that “go raibh mile maith agat” would mean “a thousand thank yous“.

What's the "mile"? I've never seen that here before.

Interesting! Thank you. And they are in fact cognates. Must have come from the Roman occupation.

Okay, I over-generalized from their presence in ancient Britain, but they did have significant contact with ancient Hibernia.

You should read your own links. The Romans ruled (southern) Britain for the better part of 4 centuries and there are plenty of archaeological artifacts all over that region, but in all that time the only such artefacts in Ireland are trade goods, and one small dwelling near the east coast. It's hard to prove a negative, even in archaeology, but if the Romans ever invaded, they left less trace than any other invaders, before or since, in particular in the oral history of the country.

The influence of Latin on Irish came long after the Romans Empire, when Latin was the common language of Christianity.

Unless there is some context forcing it singular or plural, it can be either.

If it's multiple choice and you see both, select both.

Thank you. I will tell DL that either should be correct.

If you said "go raibh maith agam" would that mean "thank ME"?

Yep. Literally "May there be goodness at me."

Rae.F: Thank you for your supportive response. You seem to know the Irish language - have you ever thought about becoming a moderator? Your response to Sclare92 shows you have teaching skills.

Thank you. I'm really not that knowledgeable in Irish, though. 99% of what little I know about Irish I learned in these fora. I just happened to have picked up the literal word-for-word gloss from someone else's explanation elsewhere. I do have a degree in linguistics and I used to work as a tutor in math and ESL (English as a Second Language), so that influences my approach to learning and explaining.

I have considered applying to be a forum moderator, although mostly to help keep the off-topic clutter down.

We have a lot in common - I studied linguistics, too, and tutored ESL. I have a degree in French, but haven't used it in many years, so am doing Duo as a review. Really enjoying it!! I am also really enjoying learning Irish. I have Irish ancestry and my husband is of 100% Irish ancestry, so I am doing it for him, too. - But, seriously you have that special gift of teaching, so I hope that you do apply to be a moderator. Here's a Lingot!!

Why is it go raibh and not go bhfuil?

go raibh is the (present) subjunctive form of bí

the subjunctive mood is used for expressing wishes, commands, etc. (things that are hypothetical or expected).

Is there any other way to say "thank you" in Irish? Like an abbreviation? Maybe something more colloquial?

There is no abbreviation for go raibh maith agat really, it's always said like that in common speech. You might occasionally see GRMA in text talk though.

"Agaibh" is a first for me; the app teaches "agat". Is the pronunciation the same?

No, nor do they mean the same thing.

Irish has what's called prepositional pronouns. They're a fusion of prepositions and pronouns. 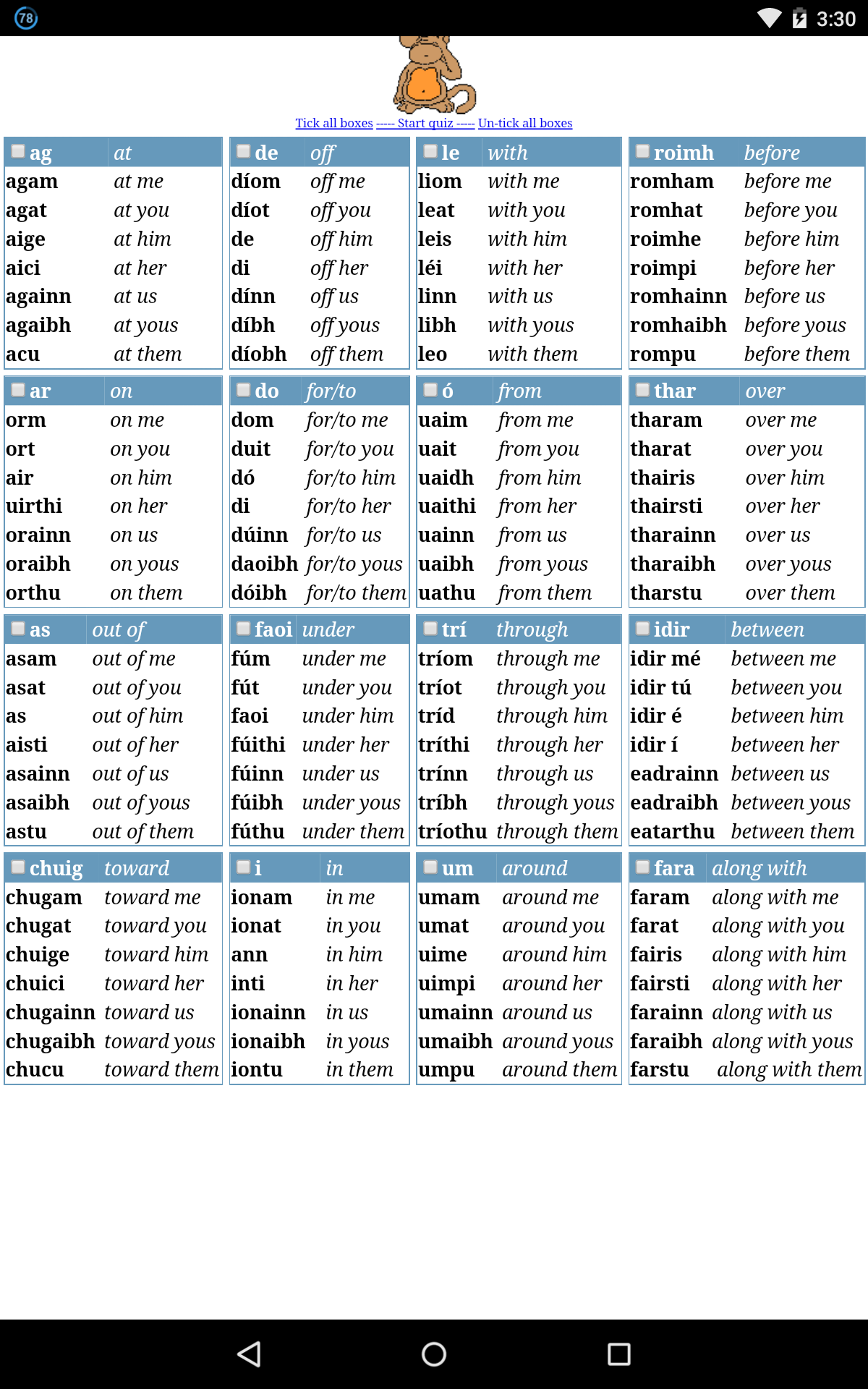 Where's the screenshot from?

Now if only I could find something like that for Scots Gaelic...

I Googled "scots gaelic prepositional pronouns" and found these:

What is the literal translation of this?

May there be good at you.

I wonder how you pronounce it

Helpful as usual, Rae! I came here to try and find out exactly this.

In English there's no plural you, it would be useful to specify that something like "thank you" it's in the second person plural, and not penalise the learner

are there any other variations of thankyou in irish, even slang, just out of interest

The question doesn't define whether it's single or plural, i think it should. How else how are going to get it right.

Both the singular and the plural are accepted, but you must use the right word forms and spell things correctly.

Unlike English, Irish differentiates between singular "you" (tú), used to address a single person, and plural "you" (sibh), addressed to two or more people.

Go raibh maith agaibh is "Thank you" when you are thanking more than 1 person.

I don't get this. I put agat and consider that is right also as there is no indication in the sentence that the thanks is for you plural

The answer is wrong as it is Go raibh maith agat

The answer is not wrong.

Unlike English, Irish differentiates between singular "you" (tú), used to address a single person, and plural "you" (sibh), addressed to two or more people.

Go raibh maith agaibh is "Thank you" when you are thanking more than 1 person.