The baby eats an apple? Heck no it doesn't, it doesn't have teeth yet!

Sometimes a baby is referred to as an "it" in informal speech because because "baby" is a gender-neutral term. Since a baby is not old enough to express a personality very well, a casual bystander may refer to the baby as an "it" if the bystander doesn't know the baby's gender. However, no one refers to a person older than a toddler as an "it". Instead, a person with an unknown gender would be referred to as "he" in formal writing [since the person referred to is a member of mankind], "he/she" in modern publications [that don't want to suggest that the person is not female], or "they" in informal speech [where the speaker has the same concerns as modern publications but only wants to utter a single syllable].

It, the damned thing, the little bastard, etc.

I wrote the translation as the baby is an apple

That would be "Das Baby ist ein Apfel", not "einen". But I did the same as you anyway!

XDDDDDDDDDD lol i heard that too... imma give you a lingot 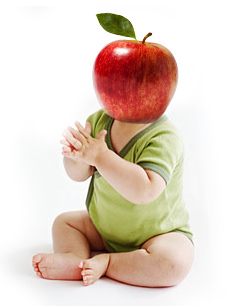 They should not leave a baby alone to eat an apple. Since it has no teeth to chew the apple pieces it could be dangerous for the baby. Unless the baby cant bite on the apple. But some babies with their newly grown tiny cute teeth can; and that is dangerous!!!

The baby would NEVER eat an apple.

The term "baby" is quite broad. Infants around 1yo sure have teeth, but may still count as babies.

But at one year the baby is still unable to eat an apple.

I wrote: das Baby isst einen Apfel, but that was marked as wrong????

I totally think the baby eats a apple should be accepted...

Duolingo expects you to understand the "a/an" rule in English.

I wont disagree with you cause you look like your an expert, Level 19 in German nice!