"The capes are mine."

Will someone explain the rule about when you put the definite article in -" As capas são as minhas". Every time I leave it out it's wrong, and also when I put it in.

You were not wrong this time. It is Duolingo that apparently in over 5 years has failed to add the article to the database of correct answers. 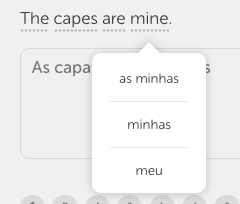 See, in Brazil the articles with possessives are often optional (less so in all the other Portuguese speaking places which covers far more than just Portugal). So, despite that Duo will occasionally mark us down for it (their mistake, not ours), it is probably better to use the articles – because they are not wrong even in Brazilian Portuguese – than to leave them out.

As you get a better feel for the language, if the Brazilian dialect is the one you prefer then you will eventually get a better sense of when the articles are needed and when they can be dropped.

Why do we need to know the word 'cape' so much?

Maybe learning Portuguese will give us superpowers? Better be safe than sorry I guess.

They still wear capes in uni. In fact, the uniform of Porto University was the direct inspiration for the uniforms in Harry Potter.

Maybe it rains a lot in Brazil ... Capa de chuva

What superman wears on his back

as capas são as minhas. Why is this wrong, dear DuoLingo? Walt

"Os cabos são meus"? I own both the North Cape and the Cape of Good Hope.