Translation:Paul drinks wine before the cat.

My question and what is not explained is why does the letter g get placed at the front of the word cat in this sentance? I have got to be missing something.

Hmm, where are you running into this sentence? I'm getting it in the Eclipsis lesson, which is where they explain it. The g is there because the word follows the preposition "roimh".

I am running into it in the plurals lesson... I am really only using the app based version for android so I think I am missing things some people have mentioned a Tips section that does not appear to be accessible via the app

Yeah, I had been using the Android app for a while, but for the earlier stuff (mechanics of a language and such) it's much better to use the website, I've found. Actual grammar lessons so you don't have to learn through trial and error (though sometimes that still works!) as well as there seems to be less issues on the website. For example, some of the lessons for Irish didn't seem to teach me all the words, unless I did them on the website.

It should be impossible for this sentence to appear in the Plurals skill. Note to others - please comment here if you notice this happening again.

On pcs, not on phones

This is what the Tips look like on my phone: 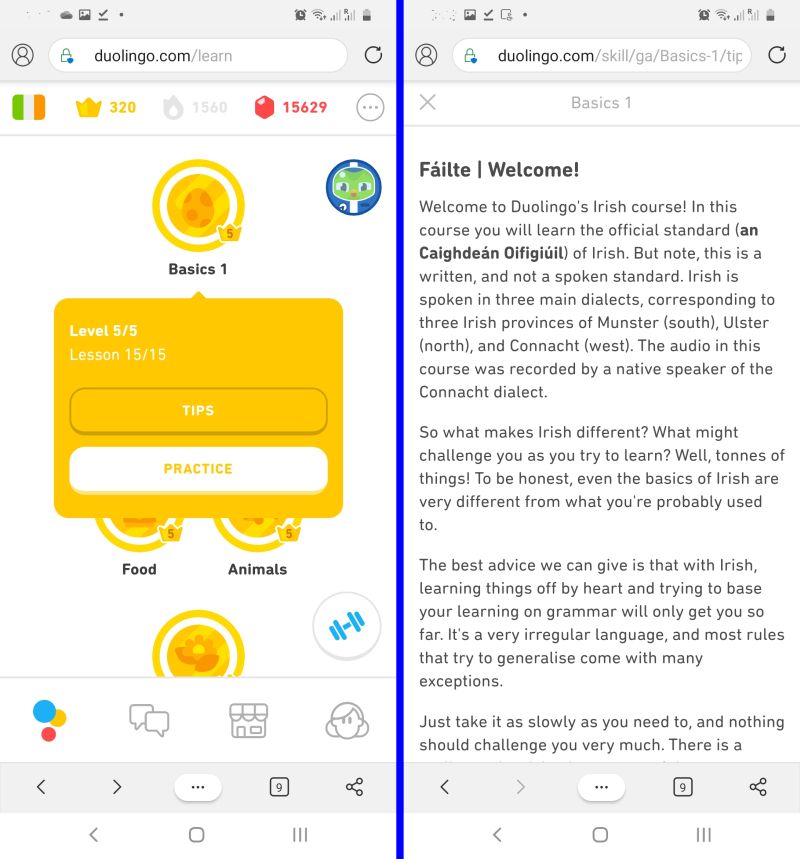 (Phones have web browsers too!)

I got this in Eclipsis, but with no explanation of when/how/why you use suvh a thing, or what eclipeis even is (in the Android app)

I think that a lot of the time the grammar lessons which go along with each section only appear on the website. I've had problems with the app a lot since you pretty much have to learn through trial and error instead of being taught the proper grammar.

Its a urú. Irish is comolicated like that, I learn it at school. Hahaha

That is called an urú. We use it in Irish for many different words. I don't know the exact definition, do look it up.

the g before cat is called an uru

The way i understand it, they do this because putting certain sounds together disrupts the flow of the sentence. So anytime u have a preposition + definite article (roimh + an, ag + an, ar + an) a letter gets added before the word if it starts with a certain letter. You then only pronounce the new letter and ignore the original one

Poor Paul. He is so lonely that he can drink only with his cat.

Paul drinks wine in front of the cat. The cat watches. Paul drinks. "Nothing to do now but try to sleep," Paul realizes, as he leaves the empty bottle on the floor next to his mattress. Paul removes his T shirt and socks, letting them fall to the floor as well. Wearing only his sweatpants, now, Paul grabs the pull cord attached to the bare light bulb that hangs from the ceiling, directly over his mattress - a convenient location, as that bare bulb is the sole source of illumination in Paul's one-room basement apartment. The cat jerks her head in Paul's direction, as if this is the very moment she has been waiting for, fixated on the dancing string that Paul has inadvertently shaken. "Sorry, girl, you can't play with this string," Paul says to the cat, then pulls the cord, offing the light. As he lies down on his mattress, Paul sighs into the darkness: "This has been the best Christmas ever."

I know before can have a time meaning and a place meaning in English; is it the same in Irish?

I mean to say: Paul is definitely drinking in front of the cat, but is he also drinking before he allows the cat to have some?

Yes, roimh implies before in terms of time and/or place.

Thank you, Lancet. I saw this same answer in a later sentence's discussion.

I was worried about the same thing. I mean, Paul drinks in front of the cat or is he drinking wine and then giving the cat wine? (hope the first, LOL) Such an odd sentence.

Is he drinking wine infront of the cat, or before the cat can?

Or is he drinking the wine before he tries to drink the cat?

It can be both temporal or spatial.

So is this "in front of the cat" or "before the cat drinks wine"?

Either/or. It can be argued spacially, meaning that Paul is sitting infront of the cat, or temporally, meaning Paul drinks, then the cat.

If Pól drinks wine then something else, say the water, would the structure still be Ólann Pól fíon roimh an uisce?

Yes, you could say that. Though if you wanted to say "before he drinks the water" you have to change it to sula n-ólann sé an t-uisce and can't use roimh (except in Mayo).

Is it gcat or cat?

No, that is not true. Certain prepositions (ag, ar, leis, roimh, thar, trid, um when followed by the singular definite article "an", faoin, ón) and other specific words (ár, bhur, a, seacht, ocht, naoi, deich, i, dá, mura) require the change in sound of certain letters (b,c,d,f,g,p,t to m,g,n,bh,n,b,d) in the following word, by adding the letter to the beginning of that word, all for the flow of language. This is closer to "liason" in French in which le becomes l' in front of vowels, but it is much more complicated. An example of a preposition that does not take eclipsis when followed by "an" is "idir an". https://www.duolingo.com/comment/10981166 Also a feminine noun starting with s (not including sc, sm, sp, st) adds a t to the beginning of the word after preposition + "an", but not masculine nouns.

What would I do without these kind folks who take time to share their knowledge here. Irish is very difficult! I find Chinese easier! Thanks!

I thought cat was cait?

What happens when eclipsis meets lenition? “Paul drinks wine before my cat.”

It is the combination of the preposition and the singular definite article an that causes eclipsis. No an, no eclipsis.

So it would be:

Correct? Thanks for clarifying!

That's correct. though ar bord is used for "on board", and ar bhord for "on a table".

ar an mbord is correct for Munster, Connacht and Caighdeán Irish - in Ulster Irish, they lenite when everyone else eclipses after certain prepositions and an.

The translation says "before" instead of "in front of" so I got confused like he drank wine first and then the cat will have some... Anyome else?

Just like "before" in English, roimh can be used for time or position.

I know it just sounds a bit off to say "Paul drank before the cat" in english 'in front of' would be more appropriate.

I agree - we would only say that in 1850 or something. We would say in front of for the spacial description and before if we meant before the cat drinks.

What does this sentence mean?