So "till" at the end means "another"?

Yes, exactly. It’s a particular meaning of the word ”till”. Think of it as you add something TO what already was there. An audience often shouts ”en gång till!” (one more time).

Tack! Is the "till" stressed?

It can be, just as you can stress ”another” in the English translation, but it doesn’t necessarily have to be.

Sorry for going off topic, but could that meaning of till be somehow connected with the expression "lycka till"?

No, in that expression it just means ”to”. I can imagine that ”lycka till” was originally short for ”lycka till dig” (luck to you) or similar, though I’m not sure.

Actually, when I think better about it, it sounds very logical. :) Thank you.

En till was the first phrase i learned in Sweden. My bartender taught me.

Is there any difference between "till" at the end of sentence and "en annan"? Would "Älgen äter en annan äpple" mean the same?

That is what I believe too. "ett annat äpple" : another apple and "ett äpple till" : an apple more. 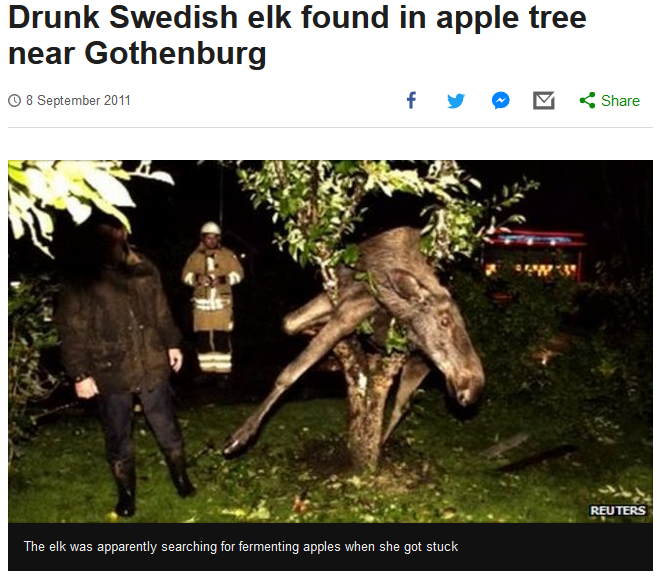 Ok, I could be wrong, but I think based on the sort of downward slope of the nose, this animal might be a moose, not an elk. Also, Per Johansson, who found the animal and gave an interview to BBC about it, called it a moose in the interview. For whatever reason, it makes me crazy that in Swedish there is a lack of clarity about the difference between moose & elk given they're both apparently called älg.

a moose = en älg a reindeer = en ren According to me "elk" is the Norwegian word for the Swedish "älg.

Is that possible: jag äter ett (1) äpplet till? Like the other apple

If you want to say "I eat another apple (instead of the first one)", you say "Jag äter ett annat äpple". Or for determined "I eat the other apple", "Jag äter det andra äpplet"

Is it right to say "jag skulle villa ha ett äpple till?

(Surely, this is some kind of Swedish tongue twister.)

why do we keep getting the English translation of Moose is the only answer? The correct word is Elk!

I have always found thar elk is accepted as an answer. Moose is not wrong either.

May 12, 2019
AboutDuolingo English TestMobileHelpGuidelinesJobsTermsPrivacy
Learn Swedish in just 5 minutes a day. For free.
Get startedLogin