Behold, our second culture post! This post includes a separate event, focused on the Dutch celebration surrounding Sinterklaas. Please see the bottom of this post for an event description. We hope that the information we provide here is useful and comprehensive!

Sinterklaas is a traditional figure in the Netherlands and other Dutch speaking regions who is based on Saint Nicholas. He is not the same person as jolly ol’ Saint Nick as you know him in the U.S. or elsewhere, though he is indeed very similar.

He is based on a historical figure: The 4th century Saint Nicholas, Bishop of Myra (Incubator mentor… wait no, whoops, actually a city in modern Turkey…). This Saint Nicholas was known for his miracles and for helping children (patron saint of children). This is also where Sinterklaas gets his appearance.

Like Santa Claus, Sinterklaas is an old guy with a big, white, old guy’s beard and he likes to wear red. However, he does not dress the same at all really. Sinterklaas’ traditional outfit consists of a long red cape, with a hat called a “mitre”. He’s a fancy fella, it goes without saying, as he also wears a ruby ring and carries around a golden staff with a curled top. Sinterklaas’ go-to mode of transportation is not as flashy as that of Santa Claus. To arrive in the Netherlands in the weeks leading up to December 5th, Sinterklaas takes… a steamboat (called Pakjesboot 12)… from Spain! Evidently, Sinterklaas is more of a fan of the beaches of Ibiza than of the cold, unforgiving ice sheets of the North Pole. When he gets to the Netherlands, however, he moves to his trusty steed, “Amerigo”, who he rides around the Netherlands, welcomed by children and adults alike, cheering and singing like only children and adults who are welcoming Sinterklaas can. On the night of Sinterklaas, he rides his horse over the rooftops to bring the gifts to well-behaved children.

In the Netherlands, Sinterklaas is celebrated on the evening before Saint Nicholas Day (December 5th).

It is on this evening, that all the little Dutch children, and sure, the old folks too, gather around in all their joy and glee to open presents brought by Sinterklaas and his helpers (the “Zwarte Pieten”).

Traditionally, it all begins with the arrival of Sinterklaas and the Zwarte Pieten from Spain, called “intocht”. This usually takes place in early November. Their arrival is always met with a lot of joy and large crowds who await the moment when they can see Sinterklaas’ glistening beard and have a few “pepernoten” thrown to them by the Zwarte Pieten.

Between his arrival and the evening of the 5th, he visits schools, hospitals and shopping centers. Children place their shoes next to the fireplace (or nowadays the central heating radiator can substitute) for them to be filled with gifts. They often leave some food in the shoe for Sinterklaas’ horse and sing a traditional Sinterklaas song. The next day, they may find some candy or small gifts in the shoes.

When the big night finally arrives, the families prepare for a veritable onslaught of gifts from Sint and his helpers. This evening is referred to as “Sinterklaasavond” or “Pakjesavond” and is the main gift giving event of the holiday. The gifts can arrive in a number of ways, each being quite magical in the eyes of children. Sometimes you will either hear a knock on the door or hear someone ring the doorbell. Once you go open the door to see who’s there, however, you won’t see Sinterklaas or his helpers. Instead, you’ll find a big bag of gifts. On other occasions, this big bag of gifts will suddenly appear in front of the mantelpiece. When Lavinae was a child, the bag of gifts was usually hidden in a car boot, even!

The next day, when Sinterklaas realizes how cold and gray the Netherlands is, he makes his way back to the warmth of Spain without much ado.

As mentioned before, Sinterklaas is celebrated the most in the Netherlands, but also celebrated in Belgium, Germany and even Austria and Denmark. Sinterklaas visits the homes of all those who celebrate (a personal visit!) on the evening of December 5th. How, when and if you’ll meet Sinterklaas then, depends on Sinterklaas’ time schedule and his mood.

Why do the Dutch celebrate Sinterklaas? In the fourth century AD, Sint Nicolaas saved the people of his village from famine. Story goes that he also resuscitated three children and gave presents and dowries to poor girls. Some sources report that he passed away on the 6th of December, in the year 343. In the year 1087 his remains were moved to Bari, Italy. It is not clear why the Dutch tradition states that Sint Nicolaas is from Spain. This could have something to do with the fact that Sint Nicolaas is the patron saint of seamen. It is very possible that this tradition has reached our coast due to contact with Spanish sailors.

Sint Nicolaas’ legendary gifts and dowries to poor girls has led to the tradition of giving gifts to children the night before his date of death, on the fifth of December, which is now a day of celebration. Together with his helpers, Sint Nicolaas visits the children: the bad children are punished and the sweet children are rewarded. The worst that can happen to a bad behaving child is him or her being put in a bag and taken back to Spain. This is the same bag from which children are given candy and gifts, when it is handed out on the street. A lesser punishment would be getting a minor beating with a cane (sounds painful still!). 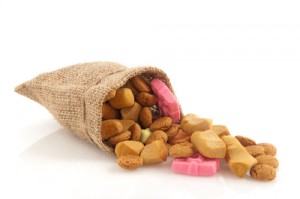 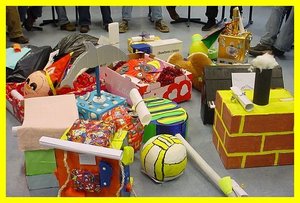 This thread is locked.

You can enter for the contest here! :)

Tips for writing a Sinterklaas poem
Dictionary which helps you with rhyming Dutch words!

As you can see, we've locked this thread.
This is because technically discussions have to stay on topic, and we feel that the discussion on our cultural tradition may take completely different turns.

We do not want to keep you from discussing our culture and traditions.
Thus, you can express your point of view here. Please be polite and thoughtful of other opinions. You know the drill. :)

Also check out this great post about Christmas Markets and the German version of Sinterklaas by the German Course Team (and Christian specifically)!