"Itheann an madra roimh an sionnach."

Translation:The dog eats before the fox.

every time I see this sentence, I think of that old Disney film The Fox and the Hound. Would the title actually be translated to "An Sionnach agus an Madra" ?

An Sionnach agus an Cú would probably be more likely.

awesome. I didn't know if there was a specific word for 'hound'

I wondered when Cú Chulainn would pop up here! :)

One question if I try to write The hound of Chulainn is adorable. How would it be ?

would it be : cú Chulainn alainn ?

Is roimh only used for geographical location? The English "the dog eats before the fox" can mean both physically in front of, or the dog eats, THEN the fox eats.

It can mean temporally as well, yes.

I always learnt that Fox was madra rua (red dog).

Both should be accepted.

Is this because he lives closer to the henhouse?

So is fox "ionnach" when not eclipsed?

No, sionnach is fox, as learned in the animal section. Sionnach is one of the words that doesn't eclipse.

The mobile app seems not to teach all the words in a given lesson. I saw 'sionnach' in practice for the first time in this sentence.

In some dialects, it eclipses to "tsionnach", but not in the form that Duo teaches.

You all are quite good at that, so it seems. I just started the course and originally my mothertongue is German so I wonder a lot

How are you finding the lessons? English isy first language and I'm trying to learn German and this at the same time. German is doing a lot for my confidence and then Irish squashes it back down again.

Kind of odd to find this sentence in this lesson when nothing eclipses.

Perhaps the point is to remember the exceptions as well as the rules; here, because 'sionnach' is masculine, 'sionnach' does not become '*tsionnach' (according to the standard duolingo is teaching; there may well be dialectical variation).

tsionnach is not an example of eclipsis - you can't eclipse words that start with s.

But s is definitely messy when it comes to the dative case - it is the only time that gender is a factor in the dative case, and the rules vary considerably between the dialects.

I scrupulously avoided using the word 'eclipsis' for the very reason that 's' cannot be eclipsed, and duolingo's 'tips and notes' article regarding eclipsis does not enumerate 's' among the letters that can be eclipsed. Nevertheless, in those very same 'tips and notes' for this lesson on eclipsis, section '3. Preposition + Definite Article' mentions that a 't' is appended to the beginning of feminine words that (would otherwise) begin with 's' except for nouns whose initial 's' is followed by c, f, m, p, t, or v. The example duolingo gives is 'leis an tseanbhean' / 'with the old woman.' The note continues: 'If the word begins with s and is masculine, no change occurs.' I cannot look into the minds of the course developers to determine motive, but I think perhaps that taking care not to add the 't' before the masculine 'sionnach' is one of the points of including this exercise that seems 'odd ... when nothing eclipses,' as barbara.gr5 and perhaps other students observed. Just a guess, something to consider that might inspire further investigation.

I did not know that 's ... is the only time that gender is a factor in the dative case;' thank you for that information; I will watch for that 'mess' and variation among the dialects as I progress.

How do you find the tips and notes for a lesson. 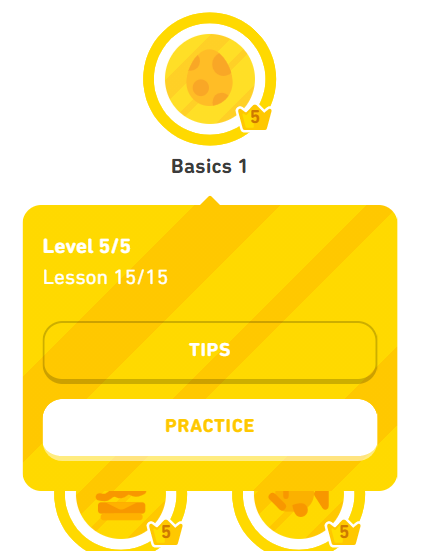 Nuair a thosaíonn an fiach, itheann an madra an sionnach. :)

Ithean an madra roimh an gcat

I thought fox was madra rua?

Whats the difference between roimh and raibh? Best i can tell, they both mean before

roimh means "before"/"in front of". It combines with prepositions to give romham - "before me", romhat - "before you (singular)", etc, and when it combines with the plural "you" sibh you get romhaibh - perhaps you mixed that up with raibh?

Yes, ur right, i did confuse raibh with romhat. Thanks!

Why is "The dog is eating in front of the fox" not accepted as a translation here? To me, that sounds a lot more natural and idiomatic than the "correct" answer ("The dog eats before the fox"), unless the specific meaning is that the dog gets to eat before the fox does.

Unlike some other European languages, Irish and English both differentiate between the simple present (itheann an madra - "the dog eats") and the continuous present/progressive present (tá an madra ag ithe - "the dog is eating"). They aren't equivalent.

Thank you once again and have another Lingot! I'm still very much a noob in the Irish language. Either the course notes don't mention the continuous present yet, or I forgot/overlooked where they did. But I'm definitely going to remember this particular distinction from now on, so thanks once more!

Domestication in a nutshell ;(

I thought sion ach was more specifically a vixen

Where different words exist for the male and female of an animal, the word for the female is usually a feminine noun, such as bó, cearc, caora, eilit, lacha, etc

Why is The dog is eating before the fox wrong?

Unlike some other European languages, Irish and English both differentiate between the simple present (itheann an madra - "the dog eats") and the continuous present/progressive present (tá an madra ag ithe - "the dog is eating").

They aren't equivalent, and itheann an madra does not mean "the dog is eating".

I presume in English this means the dog eats in front of the fox. The dog eats before the fox would mean the dog eats first the fox eats after him...

If you want to make a strictly temporal reference, you repeat the verb - "The dog eats before the fox eats", but you can't use roimh before a verb, you must use sula:
Itheann an madra sula n-itheann an sionnach

For a strictly spatial meaning, you can replace "before" with "in front of" in English or os comhair, but note that os comhair triggers the genitive ("of"):
Itheann an madra os comhair an tsionnaigh

Wow thanks so much! I do find Welsh difficult, but love it! It's a bit like a fog at first but great feeling when fogs clears....thanks again!

Itheann- he/she/it eats An madra- the dog Roimh- before An sionnach- the fox He eats the dog before the fox This is why you don't translate things literally lol...

itheann doesn't mean "he/she/it eats". itheann just means "eat(s)" (English is so irregular). The subject (the "actor" that is performing the verb) comes after the verb.

In the present tense, the 1st person form is fused with the verb, so you get ithim for "I eat" and ithimid for "we eat", though itheann muid is also allowed for the plural.

So all this time I've been overcomplicating the verbs... I've been treating them as if they were conjugations lol. Ignore this post, then; I was trying to make a joke but misunderstood the grammar!