Translation:My parents live in the capital of the United Kingdom.

65 Comments
This discussion is locked.

Erm guys, Great Britain doesn't have a capital...it's not a country :/ that's like saying 'the capital of Scandinavia'

facepalm I've got to defend us though, in Swedish, Storbritannien does have a capital, Wikipedia link, because we usually call the United Kingdom that. I'm really sorry to say this, but this means that Great Britain is a false friend :-(
Will try to fix the sentence asap, and thanks for the heads up!!

PS have a lingot!

I agree. In Swedish Storbritannien could be either the state United Kingdom, or the island Great Britain.

But the United Kingdom doesn't have a capital city :p it's a collective of countries, each with their own capital. London is the capital of England. If you asked a Scottish person if their capital was London they would definitely say no.

Edit; in fact I just looked it up and according to Wikipedia, London is the capital of the 'UK'...but even to me as a native English person, that makes no sense haha, maybe I'm wrong but it seems weird :S. Then again, I never consider myself 'British'. Hmm, maybe you can leave it as is then.

I mean it’s complicated, but the UK is also a country, it’s not a union like the EU or anything like that. It’s an official sovereign state with an official capital, and it consists of four countries with capitals of their own.

From our point of view, it is important to speak about Storbritannien because otherwise we very easily say England when we in fact mean the whole United Kingdom.

It's strange to consider as a native as it's not something that I ever even think about.

Most people do the same in German. However, there is a possibility to distinguish between Great Britain (Großbritannien) and the United Kingdom (Vereinigtes Königreich) in German, it's just that the latter word is rarely used. Does Swedish have a similar translation for the UK and it's just not commonly used or would it always be Storbritannien?

Yes you're wrong :P. London is the capital of the United Kingdom. Scotland is a region with a degree of autonomy within it, but it's still subordinate to Westminster.

DerrickMcClure1 is correct that Scotland is a country.

Great Britain can be either a political term or a geographical term.

The full name of the U.K. is The United Kingdom of Great Britain and Northern Ireland.

Obviously, Northern Ireland is on the same island with the country of Ireland, as they used to be one country. Ireland is a separate country, not part of the U.K.

The United Kingdom is considered “a sovereign entity” and treated as a country; however, England, Northern Ireland, Scotland, and Wales are not just divisions of that country, but are also countries themselves.

It seems pretty complicated to me how all the politics work. Northern Ireland, Scotland, and Wales all have their own governing bodies (a parliament or an assembly), with certain powers and responsibilities distinct from the Parliament of the U.K. For each of these countries, because of the complicated history, there is a different configuration determining which things fall under the jurisdiction of their own parliament or assembly, and which things fall under the jurisdiction of the Parliament of the United Kingdom. Also, Northern Ireland's Assembly coordinates with the government of Ireland on some matters.

Unlike the other three countries, England does not have its own parliament; it is governed only by the Parliament of the U.K.

I have always found the different terms confusing. I hope this helps somebody else. It helped me to write it out.

You're wrong, sir. This is not the place for a full exposition, but Scotland and England ARE countries - nations, if you like.

I only really consider London the 'political' capital of the UK due to parliament being situated there. Culturally though, London is only really the capital of England.

The Swedish call England the UK as well as the whole United Kingdom thingy. They don't seem to differentiate. However in the past many kings didn't either!. Hence many wars and up risings. Like the American Revolutionary War. They should have a separate term for it though. Oh well.

Here's a useful (and humorous) video detailing the differences between England, Great Britain, and the United Kingdom. https://www.youtube.com/watch?v=rNu8XDBSn10

Yet again the translation should be nation's capital what is the fascination with the capital of . It is a confusing unnecessary non literal translation .

In English it is seen as important to be distinct with these 2 due to Ireland. Obviously Ireland is not in GB but is in the UK, however sometimes people from northern Ireland are referred to as British. However, many people from Eire would be offended to be considered British, or as part of the UK.

To be fair, I saw a sign in Stockholm declaring it to be the capital of Scandinavia.

At one time, it was Copenhagen under Queen Margrethe I.

The Queen will be shocked to learn this. 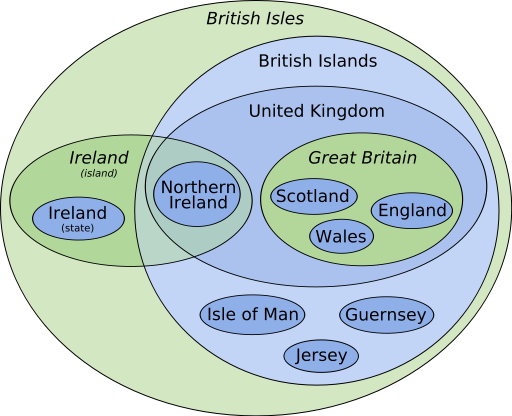 Northern Ireland is Nordirland, https://sv.wikipedia.org/wiki/Nordirland, also Ireland is Irland and Scotland is spelled Skottland, the rest seems to be self-explanatory.

Oh, you have got to be kidding me! I thought I had this down at one point, but now I see that "British Isles" is different from "British Islands"! That's just mean, lol! I am definitely copying and saving this graphic and your text to go with it. Thank you, Arnauti! :D

Thanks, this is by far the clearest explanation of this I have ever seen!

And yes, I think that even if I'm otherwise willing to forgive Duolingo for taking creative freedoms with language for pedagogic reasons, this is one occasion where great precision should be exercised and demanded.

The picture is almost correct. Some of England, Scotland of Wales are on small islands out of the coast of each country, and are not on the island of Great Britain. Thus their "bubbles" should be partly outside of the green "Great Britain" bubble.

So ... the Swedish language doesn't differentiate between "United Kingdom" and "Great Britain"?

Right. They're both Storbritannien to us.

I don't think I ever came across a scenario in school where the difference would have been noteworthy. I mean, sure, if you live in the area it's obviously important - but to Swedish children, not so much. :)

In very formal settings the difference exists, so if you are talking about college political science then perhaps they would make the distinction. "Förenade konungariket Storbritannien och Nordirland med kortform Förenade kungariket" from EU publication office . Without that, one could still force the distinction when needed but still use the form that seems not to be for diplomatic relations. "Ön Storbritannien" vs "den suveräna staten som Storbritannien".

Is "Storbritanniens" the common usage? I mean, in everyday speech almost nobody says "United Kingdom" or "Great Britain". One just says "Britain".

Yeah, it’s common usage. Colloquially it’s quite common to say England to refer to the entire UK, but obviously this is considered incorrect by many.

well, since Scotland also left the EU during the BRexit, you have to deal with the fact that the EU calls you BRitisch ;) if you want a different name, you have to secede the UK and rejoin the sane people ;)

well, you're definitely welcome ... we want the Hogwarts Express back ;)

If Storbritannien means United Kingdom, then what would you say if referring to the island of Great Britain?

They are both Storbritannien.

It is accepted. I can see you submitted an error report as well. Your translation was not accepted because you accidentally wrote "the" instead of "in":

my parents live the the capital of great britain

great britain and the united kingdom is not the same!

Please read through the other comments for an explanation.

Would 'my parents live in the capital of Great Britain,' be accepted here?

Swedish typically uses Storbritannien as the name for Great Britain and for the United Kingdom both, as noted by e.g. Arnauti above. Hence, we do accept both options. But Great Britain doesn't have a capital, so it doesn't really make as much sense as a translation.

Great Britain is not the United Kingdom so the translation here is wrong.

Please read through the other comments.

Can "my parents live in Great Britain's capital be accepted?

Why are we translating "Stor Britannien," which directly translates to "Great Britain," as "The United Kingdom?"

This is a nonequivalent translation, it's like translation "Katarina den Stora" to "Catherine II."

I wrote "Great Britain's capital." Why is that wrong?

Just wanted to ask why not Great britain, until read comments below. Well, for foreigner Great britain and United Kingdom is the same...

Can "my parents live in Great Britain's capital be accepted?

My parents live in the capital of the United Kingdom of Great Britain and Northern Ireland.

Bit of a mouthful!

That's the longest way of spelling "London" ever.

Why is "My parents live in the Great Britains capital" wrong?

I think 'the' should not be there.