Translation:I live on an avenue.

Fun fact: in (British) English, an 'Alley' (rhymes with valley) is a narrow way which goes between streets and is too narrow for cars or carts. It may run along the back of a row of houses, or (more usually) between adjacent buildings. A path which goes from the front of a house to the back garden may be known as a 'side alley', especially if it runs directly between two adjacent houses. Alleys were used historically for smugglers to escape the customs officers among other things! The town where I grew up has lots of alleys which connect sets of parallel streets, and many of them have names. The most famous one is 'Squeezegut Alley', which is only about 40 cm wide at its narrowest! 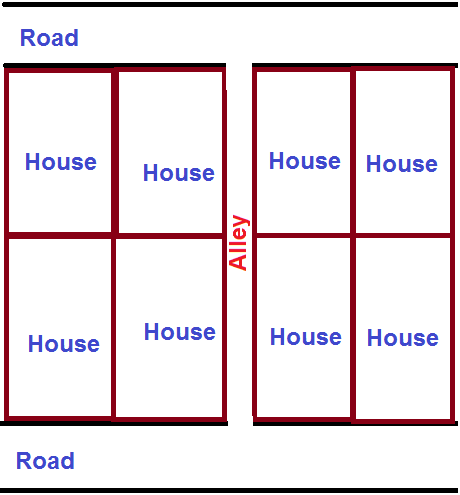 In some parts of northern England, I believe 'ginnel' (said with a hard g) is fairly synonymous.

We have alleys in the U.S., too. Not so much in suburban areas, but all over the cities and small towns. They run between the houses, like you described, and even more often behind. The ones behind a row of houses are usually wide enough for cars, but not intended for "through traffic," sometimes paved just with gravel. Sometimes people have a carport or garage behind the house, and the front of the house is set up only for foot traffic. I have always liked that set-up, which includes a large front porch as well, or at least a wide front stoop. I don't think anyone is building homes like that anymore, but there are lots of them still standing from previous decades. I wish I had a big front porch!!!

I'm tickled to learn the word "ginnel," and I especially like the name of that alley, "Squeezegut"! That is great! Hahaha!

Its obviously different in swedish... And gernsn too,maybe other ones too,i dont know.

Is é a letter used much in Swedish? I had learned that there were only 3 extra letters in the Swedish alphabet (compared to the English alphabet): å, ä, and ö. And is é pronounced like ee-ah then?

It's not a Swedish but a French letter where "allé" does come from.

Same for German; and the latter may be the only language that features a “song” describing the concept of an Allée.

I guess it's like in English: loanwords such as 'café'.

Its not a letter its just an e

The mark puts stress on it

Prepositions rarely translate perfectly, but på is roughly translateable to "on" and vid to "at" or "by".

I hope "in" will be allowed.

"On" in this situation is correct in American English. We always live "on" a street.

That was exactly my understanding ... and why I initially chose på (Another reason is that på is such a typical Swedish preposition so I use it everywhere I can LOL LOL)

Is alle also a synonym for street?

En allé is a double or single line of trees, often along a road or river. The closest thing in English is 'an avenue', but it's not a perfect translation (the term 'allée' exists in English too but is not used as often as allé in Swedish).

in that case, how is the English translation "on" an avenue. Shouldn't it be next to, or by?

What is the difference between alle' and aveny?

Why is the translation "I am living on an avenue." not accepted?

There's a discussion about this on the reverse sentence forum: https://www.duolingo.com/comment/5853231

Is there a translation for boulevard in Swedish? It technically is a wide road or street with a strip of green space between the two sides of the road. Ideally there are trees or at least shrubs as well as grass. All the words to describe every type of roadway is used to name specific roads of course at least in the U.S. At least in Minneapolis Minnesota streets run north south and avenues run east and west. That makes it easier to get around there. All bets are off in St. Paul though. :-) Why that is is a great story but too long and irrelevant for here.

Since alle means a street which full of trees. So you cant live in it ..then why using bor / live

I couldnt hear the word vid

Is Swedish like Italian with foreign words? Meaning the words coming from other languages stay mostly the same like allé(e) in French?