Forgive me, but how does "acabam" end up meaning "have just"? This one confuses me....

This is an expression, right?

expression? I don't think so. Every language has its own way to express this thought (In French, for instance, 'venir de + infinitive).

How do you say:my parents arrive at the station?

Wait so shouldn't this be acabaram not acabam if it's meant to be past tense?

I was just wondering the exact same thing..

An answer would be nice.. vou fazer uma prece o:)

Literally, they're saying that their parents are finishing arriving at the station. So the verb "acabar", "to finish" is in the present tense. But the thought is, they just arrived.

Really tough sentence though when you see this usage for the first time.

How would I say: "my parents stop coming to the station (- as of today)" even if that is an awkward sentence?

I think your sentence needs the "a" with the grave accent (à) which makes the contraction of to the (a + a) for feminine nouns like estação.

Just 7 months later, I send my thanks for your answers and the "Pare" sign (language learning is distracting).

After seeing similar in Costa Rica I was excited to see all the variations there would be in Europe, but in reality, no matter which country, they all basically just say, "Stop". =]

No kidding. For cheap entertainment one day I watched for about 30 minutes while cars drove right through an intersection that had bright shiny new "Stop" signs on both sides of the one-way street, even with police officers standing on all four corners pulling them over when they did; yet the next car would do the same.

Now there is a light there instead.

I think here is the contrary... we are flooded by signs everywhere =/

Oops! Would you believe typo? :(

Why the specification of BRPT?

I get it, as in parar de fumar, but I must admit I do not understand the double infinitive.

What do the Stop Signs say in Brazil?

Because I don't know how it works for PTPT =) 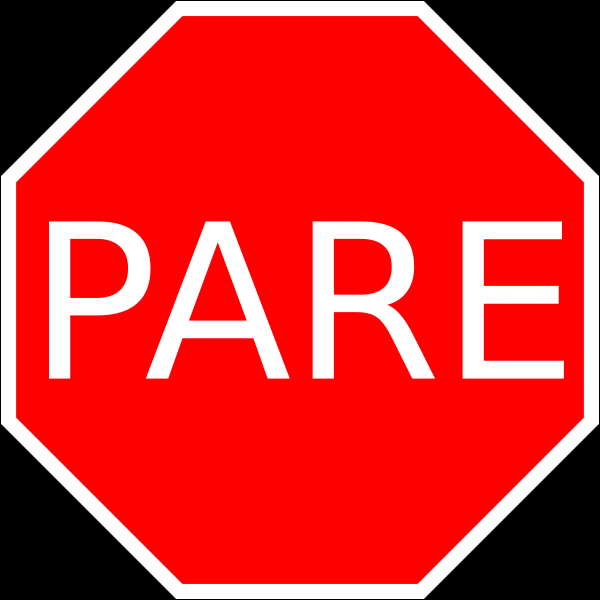 I said have arrived, but not allowed. But surely it is much the same thing? I guess this is just another phrase we have to learn.