English: Below is a list of strange compound words in Danish, along with their literal translations into English. I challenge the lot of you to try to guess what the words mean. I will be posting the correct answers in a few days. Good luck! A lot of the Danish ones are quite similar to the German words. It's funny how often you search for a word, say "In German it would be sea pig but that can't be how you say it in Danish" ... and get to hear that it is the very same in Danish.

I agree, I have a pretty good hunch about most of these from German. It reminds me of these: 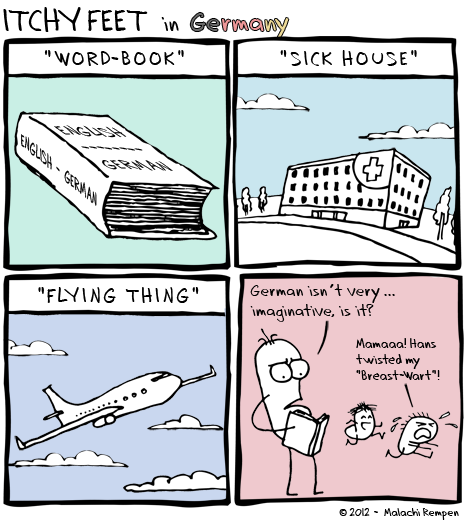 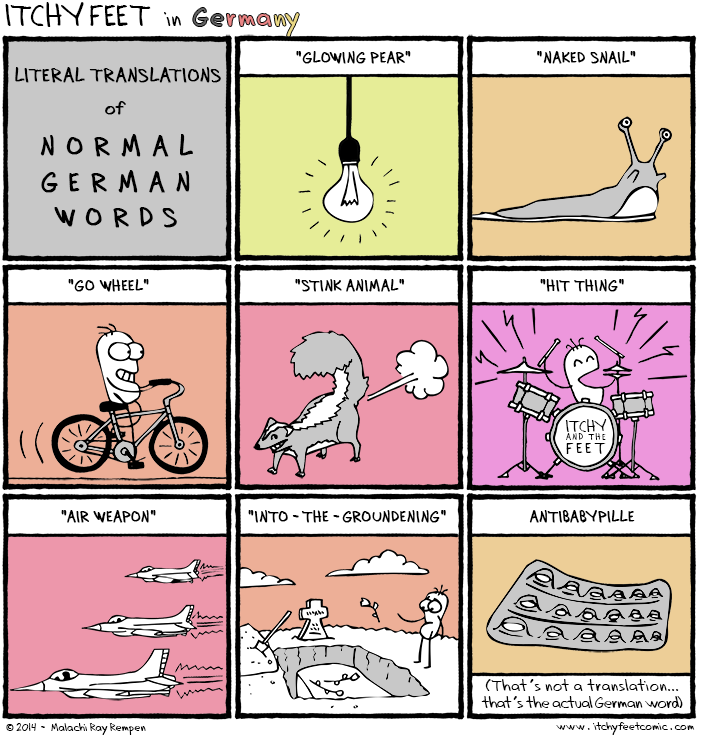 These words in English, German and Danish

Gotta love the Germanic languages. Do you know what the p in p-pille stands for?

So it seems they aren't really sure. My immediate guess would have been præventionspille.

Antibabypille commonly is abbreviated to Pille or die Pille (with an emphasis on die).

marsvin is a little dolphin

Marsvin is also a guinea-pig (and wine grown on Mars). It is a word that the Danes took to France, when they got Normandy: Marsouin

Vold has another meaning which is the one used in Voldgrav, namely "a dike" (no not a lesbian) therefore it's literally a Dike Ditch which I guess doesn't make it much easier

I have already seen some of these (my favourites are pindsvin and bh). So my guesses are: tusindben = millipede småkage = cookies? gravhund = mole bæltedyr = either a crocodile or Puss in boots :) stumtjener = ATM or something like this kugleramme = sphere? marsvin = let it be a guinea pig, they are "sea piggies" in Russian. sofavælger = an IKEA customer? voldgrav = quicksand?

I could find a lot of the meanings via Dutch :)

1 woodlouse (pissebed in Dutch – which actually makes me wonder why we call it a pissing bed... Had to look this one up)

5 dachshund (teckel - had to look up)

10 aeroplane (vliegtuig, same meaning though literally that would be "vliegmachine", which is sometimes used but not actually the right word)

13 handcuffs (handboeien – got that one wrong, thought it’d be an iron for clothing)

17 abstention (onthouding – had to look up)

21 orca (orka – one of my favourite words in Danish)