Norwegian and Ukrainian are now in beta

Now you can learn Norwegian too – Norway is one of our brother nations and their course is based on the Swedish tree, so it's sure to be a good course. :D
If you've already studied some Swedish, you'll notice many similarities between our languages.

PS Ukrainian also went into beta today. I'll be sure to study both these, will you join me?

Hooray for adding to my collection of flags with crosses on them! So, that still leaves Icelandic, and Finnish, and Faroese...

I see the lingots of the other fans of Finnish, and I'll raise them a silly (but true, when it comes to spoken Finnish) meme:

Of course we must be one step ahead of Sweden in this equality thing. While Swedes are taking steps towards a gender neutral pronoun, we are already using an existence neutral pronoun.

Wow... all these people begging for lingots over on the main discussion board, and apparently the trick is as simple as mentioning Finnish. If only they knew! :-P

Have some lingots for mentioning Finnish! :D

Have some more lingots for mentioning Finnish. :D

I want all of these!!

Have a lingot for mentioning Icelandic!

Have a lingot for being overly meta. :)

Fun fact: when I was a child, young and foolish and uneducated in matters of culture, history, or geography, the flags of the Nordic countries deceived me. I assumed that Finland was where Sweden is, in order to make sense of how Norway's flag appears to be a combination of Finland's and Denmark's.

Our mnemonic at primary school for not mixing up the flags of Iceland and Norway was to think of Iceland as an island with red hot springs surrounded by blue water and Norway as land mass with blue fjords going across it.

(This was back in the days when our school choir sang the song No Man is an Island, completely oblivious to the fact that "island" should not be pronounced like "Iceland"...)

Nice! I independently invented almost the same mnemonics when I was teaching myself not to mix them up (I went for red lava rather than hot springs). Also I imagine the Faroes as having fjords running red with blood during the whale hunt...

I guess the flag of Åland is also somewhat confusing, then? :-)

Oh, I didn't learn about Åland until well after I'd been corrected for my mistake

It still confuses me. Finland is so strongly white and blue in my mind, it's really hard for me to think of it as red and yellow. I think Finland is one of these countries that has an appropriate flag, white and blue really symbolizes the country so well, just like the Ukrainian flag is a perfect symbol of the Ukraine.

The people of Åland mainly identify themselves as ålänningar... I think this layer of their identity is stronger than their Finnishness. At least the ones I have come across also see themselves as different from Fennoswedes, although that is of course what they are counted as in terms of national statistics.

I was told the red and yellow were the old colors of Finland and that's where Åland took the red from, but maybe that's not true then. I agree it's odd to have the Swedish flag symbolize Swedish in Finland, but I don't connect red and yellow with Sweden/Swedish either.

If anything, in Sweden red and yellow symbolizes Scania of course.

It seems red and yellow were Finland's colors as a Grand Duchy (although there was no flag as such), and that those colors along with blue and white were the main contenders once the idea of a Finnish nation was beginning to be built back in the 1860s. In the end they had to decide in a hurry because independence had already been proclaimed the previous year. The flag used at the proclamation was a golden lion on a red background with some silverwhite details.

Here are some cool examples of ideas from along the decision process. (Zacharias Topelius suggested the groovy-looking blue and white one with a star in the middle.)

I think I've heard that the "reasonings" for the colours (blue sky and white snow, etc.) have been made up afterwards.

Yeah, I can imagine the motivation was made up as an afterthought, but I still think the colors match the country well. Never really liked the Swedish color combination tbh.

So which colors do you think would fit Sweden better than yellow and blue then, and why?

Oh my, if they make an Icelandic course I'd get wet. Norwegian will have to suffice for now!

Hooray! Looks like it's time for the "svenska trollen" to make peace with the "norska trollen". 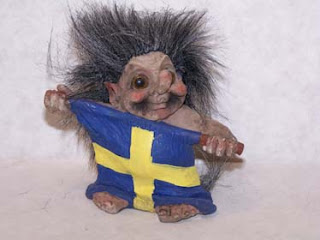 PS. I'm not calling anyone an internet troll, just referencing a Duolingo Swedish course sentence that the Norwegian team may or may not have "edited." =]

My favorite sentence in the entire course :) Is that a bruise on the Swedish troll's face?

Norway is one of our brother nations

I was irresistibly reminded of Well, the breakup was pretty idyllic.

What is the reverse backpack with a little head on it that she wears?

I think it's an armoured breastplate -- it's a bit clearer on this page. I think Elä Suomi is great, but I would not say that the quality of the art is its main selling point :).

Thank you so much for your kind words!

-your friends from the Norwegian Team

Yes, of course, but for some reason the first time I did the first lesson in each of these, the course thought that I was refreshing the course.

I got that for the very first lesson - I got 13 XP and a message saying I had refreshed it.

Should I try to start the Norwegian tree while still doing the Swedish one, or would it just be confusing?

You're fairly far along on Swedish, so you might be able to handle it, but ultimately only you can make that call. You might find the similarities helpful, or you might find them confusing. Each person is different.

Haha, just tried the first lesson and I'm already mixing it up. I'll just stay with Swedish for now.

Or you could just decide that you want to speak Svorska :)

Let's see how long I can resist Norwegian... (Already in pain!)

So many languages, so little time ;)

The Norwegian course is great so far! Thanks!

Uau, I waiting for the Russian, who can help to finish Russian for who speak english? Because I wanna study russian from Duolingo

The Russian course is well on its way, and already has a large team working on it. We just need to be patient (and practice reading the alphabet, if applicable, so that we're ready to go when it comes later this year -- they will have some lessons on the alphabet, but said somewhere that it would be good to practice it ahead of time anyway).

i am very happy that ukrainian is here... new writing system-new challenge and i am still waiting for russian

I personally am eagerly awaiting the Polish course (due in 2017 it seems). I am a fan of retro-computing, specifically the Atari 8-bit computers, and there is a vibrant scene in Poland and Czech. It seems a lot of the websites, software, and documentation is in Polish, though, so this will be useful to know!