I heard this as "o macaco" and translated it accordingly. When a masculine noun begins with an 'm', is there a good way to distinguish between "um" and "o"?

I came here for just this reason. How can I tell UM & O apart please. In conversation I expect it will be clear later. Weather The, One, A ....... Was referred to, but this snip of a conversation is unclear unless you press snail audio

"Macaco" is a word used for an animal (a monkey) and a mechanical device you use to lift heavy loads (a jack). 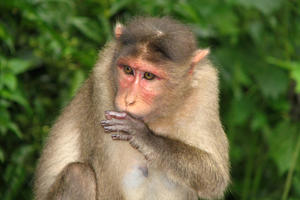 So EVERY monkey is "macaco"? In my mother language, we have word "makak", what is only one species of monkey, so I am a little bit confused...

Yes, all monkeys are "macacos" (technically the term should apply to macaques only, but it's pretty widespread in reference to all non-human simians). Other words exist for different types of members of the genus Macaca and/or other primates, and if the animal is well known that is probably the term people will use to refer to it (chimpanzé - chimpanzee; babuíno - baboon; gorila - gorilla; lémur - lemur; orangutango - orangutan, etc.).

So monkey and jack are said the same?

The monkey stole my car's jack. :)

I've done some searching online and the origin of the word "macaco" is uncertain but there is a theory that "makaku" entered Portuguese in the late 17th century, the term being Bantu, consisting of "ma" denoting plural, and "kaku" meaning "monkey". It's thought that Portuguese seamen heard it in Africa and in Brazil applied it to a type of monkey they found there. It became the standard Portuguese word for "monkey" though there are other words for "monkey" in Portuguese. Meanwhile "macaco" entered French as the name for a type of monkey, the word transforming to "macaque".

Can this word apply also to apes?