Translation:Historic ducks do not exist.

For the country that created the Donaldism, I think statement is somewhat ironic. http://no.wikipedia.org/wiki/Donaldisme

I'm looking forward to Luke's explanation of when this one would be used. :)

Edward L. Duck, the mallard and entrepreneur responsible for curing polio and solving the Cuban Missile Crisis, has applied for several corporate tax exemptions at the Norwegian Storting due to his "contributions to society at large." The Kingdom of Norway rejected his claim in a formal letter entitled, "Historiske ender finnes ikke." The disgruntled Mr. Duck flew to Sweden on a jet airliner and make an identical case before the authorities in Stockholm. The Swedish government subsequently granted all ducks protected minority status in the country and established an Institute for Ornithological Philanthropy in his name. Now, people the world over flock to Edward-L-Duck-Institutet in Gotland, where Mr. Duck spends his two-month holiday every winter.

Dear Luke, could you provide a link to this fact? I cannot find anything in internet, in English at least.

The Peabody Hotel ducks and their daily walks seem pretty historic to me: http://www.peabodymemphis.com/peabody-ducks/

Like other comments this sentence did not make a lot of sense and I wondered why it was presented. But it does highlight an aspect of Duolingo that I enjoy, which is it demonstrates how to have fun with language by generating sentences with all the elements placed correctly.

You may enjoy this one then. :)

Thank you for the sentence. I did enjoy it and recognized it immediately from the Norwegian before reading the translation. Shows I'm learning norsk, I think.

It was probably Chomsky and similar people that I was referring to in my original comment. That, and how the type of sentence here is reminiscent of children experimenting with language structure and word choice. Something many adults forget.

Oh yes, this is the content I desired. Thank you, Duo.

What was being smoked when this sentence was composed? 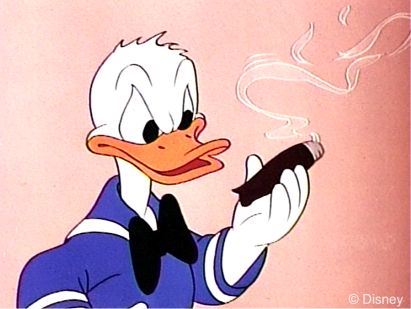 Why is it finnes and not finner? Don't all verbs end in -er in their present tense?

"-(e)s" is the ending of the passive voice: "det finnes ikke" literally means "it is not found"

How fleeting are all human passions compared with the massive continuity of ducks.

I beg your pardon! I'm shocked.

Whenever I see the phrase 'I beg you pardon', I always begin singing 'I never promised you a rose garden'. :) haha!

I d say the nonsensical s should strive to help retention via hints at mnemotechnic references (as in memrise app) Say here it would be historical fins rather than ducks that ikke finnes.

It's 20 minutes to midnight. Am I dreaming? Or hallucinating?

This is an interesting paradox...

Is this an idiom or just a weird sentence?

It may be a reference to Donaldism, look it up.

I suppose so, but such a weird line to lob at us...

Unlike the historic geese who saved Rome (for the time being).

The geese of the Capitol did protect some buildings in Ancient Rome (and, according to the legend, they even pushed back a Gaulish attack !)

I came here for some Hegelian discussions... (yet) I wasn't disappointed. ^^

Well, one random comment -- people have sometimes claimed that communism, or late-stage capitalism, or postmodernism were historically inevitable, or that there's some sort of logic of thesis, antithesis, synthesis that produces the next stage in societies. I think that sort of "teleological" thinking is unfashionable in the humanities now. However, it has something of a home in physics -- for instance, the idea that we're inevitably headed for a big crunch, or the idea that civilizations tend to wipe themselves out, and that's why the universe isn't teeming with life (see https://en.wikipedia.org/wiki/Fermi_paradox).

Is it historic or historical?

"Historisk" can have both meanings.