"The Esperanto flag is green and white."

Generally, while you can use adjective roots with verb endings to signify "be <like what the adjective describes>", that possibility shouldn't be over-used. It's sometimes quite useful for conciseness, but it can make Esperanto harder to understand.

That being said, I think "La Esperanta flago verdas kaj blankas." would also yield a wrong and somewhat nonsensical meaning:

When we say "La Esperanta flago estas verda kaj blanka." or indeed the English "The Esperanto flag is green and white.", we mean that part of the flag is green and the other part is white. This is how it looks: 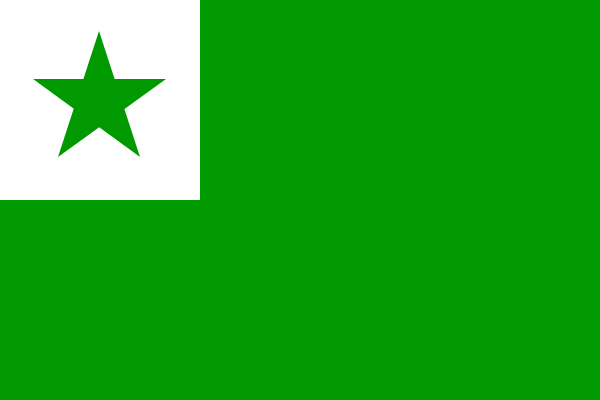 (You probably already knew from this course's language logo.)

Even if I was wrong concerning these semantics, I think using the verb forms of the adjectives when they come in a pair as here would be very bad style and rather awkward.

I think duolingo wants us to use the verb "estas". I'm not sure if the sentense is still grammatically correct in Esperanto without it.

Remember from the basics... Adjectives end in A

You don't add the -n with estas (and probably all things involving est).

Because both "verda" and "blanka" are adjetives (as words enting in -a) instead of objects which a subject is doing somethink with (ending in -n). Ex.: it is right to say: "La viro mangas verda pomon" (the man eats a green apple), because "verda" is and adjetive (green) giving the quality of colour to the noun (apple). Also, we know the object is "pomon" and the subject "viro" because of the two nouns (viro and pomo) the object is the one that ends in -n. Hence, "la viro" (the man) can be the only noun activating the verb ("mangas"). So, if we say "La viron mangas pomo verda" would mean "a green apple is eating a man"

Nope, that would have to be

In Esperanto, adjectives have to agree with the noun in number and case, so here, "verdan" needs to be in accusative.

The reason why is wrong, is that "estas" is one of a few special verbs. It has a complement (here: "verda kaj blanka"), but that complement isn't a direct object and thus is in nominative (like the subject), not in accusative. The flag is green and white, it doesn't do anything to green and white. (This also applies when the complement for estas isn't adjectives: "Sofia estas instruisto.", not — Sofia is a teacher, she doesn't do anything to a teacher.)

I made a typo. I mean, ending (not "enting") and something (not "somethink")

I have a "select all correct" question, is "la flago esperante estas verda kaj blanka" right?

an -e ending would indicate an adverb, I think

I think his question was "would an adverb be correct here?".

The flag represents the language.

As you may already know, the language Esperanto was first published under a pseudonym. The name of the book (and the language it described) was Lingvo Internacia and the author's name was Dr-o Esperanto. The Esperanto word esperanto simply means "one who hopes". As an adjective (esperanta) it means "hoping." You will often see these words capitalized when referring to the language, or the pseudonym of the language's author.

Why is "La flago de esperanta" incorrect in this case? Is it always wrong?

Why is "La flago de esperanta" incorrect in this case?

"esperanta" is an adjective. Putting it after "de" here would be ungrammatical. Also, "esper·ant·a" and "esper·ant·o" (see also in PIV) do have a direct meaning in Esperanto ("hoping" in an adjectival sense and "hoping person" respectively), so to refer to the language Esperanto, the "E" is usually (but in the case of the adjective not always / not by everyone) capitalized to distinguish these words from the former ones:

These similar phrases would be correct, though:

Whether they are accepted by Duolingo, I don't know. If the first isn't, report it as "my answer should be accepted". For the second, it could be argued that the meaning is slightly different.

Is it always wrong?

I do believe so, yes, unless the context is changed completely. E.g., this would work: