52 Comments
This discussion is locked.

Children love bunnies..... What do you think?

That would have to be "kuniklidojn" (-id being the suffix for baby animals, coming from the word ido, offspring: hundo - dog; hundido - puppy; kato - cat; katido - kitten).

"Bunny" doesn't necessarily mean baby rabbit. I think it can be used whenever you want to make a rabbit sound even cuter than it already is. Just like children will call every dog a "doggy," no matter the dog's age or size.

you're right that the word bunny doesn't use the -id suffix. the word for bunny isn't kuniklido but kunikleto. the suffix -et is a suffix that makes the word smaller. for example "monto" means "mountain" and "monteto" means "hill".

Sorry I can't respond to your other comment directly.

I agree that "bunny" could refer to a rabbit of any size. Not just babies or small rabbits.

yes, bunny slowely becomes a general word for rabbits, but the standard correct meaning is a small rabbit and this is also how it is in Esperanto.

I don't think "bunny" really means small rabbit, though. Given that, unfortunately Esperanto doesn't have a "cutive suffix" I guess "bunny" is untranslatable.

Actually, I think memyself9 has the right of it. The -et- affix in Esperanto is the equivalent to the Spanish -ito (and the English -y) which is technically a diminutive but which is quite often used for informality or cuteness instead.

When a friend calls me Miguelito, they're not implying that I'm young or small; they're simply calling me Mikey. Similarly, a little bunny would be un conejito, whereas an adult Playboy Bunny is una conejita.

So kunikleto does imply small size and/or a young age, but also has the sense of, "Aww, look at the big widdle bunny wabbit!"

My two cents; a penny after taxes.

According to this blog post, they are called kittens! http://blog.oxforddictionaries.com/2014/10/call-baby-rabbit-baby-animals/ I would say bunny was a cutter name for rabbit.

... Why call it kitten when hare's offspring is leveret and rabbits and hares is so similiar?

I love how the word 'children' is taught in the Animals skill.

Aww... wook at the wittle bunny!

I didn't expect him here. 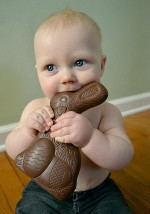 How do you guys remember kuniklo?

It also somewhat resembles the Spanish "conejo" and even the English "cony."

And apparently the European rabbit's scientific name is Oryctolagus cuniculus.

"Leporo" would work in a way since it means "hare". EDIT: Hares and rabbits cannot be switched out for each other

Thank you for the correction, kind sir.

You're welcome, and thank you for taking it with grace, so have a lingot!

Hares and rabbits CAN be interchangeable if you don't know what you're talking about.

Can't infanoj mean infant as well? Same root and all.

Kuniklo , Ancient Greek koniklos, yes, indeed, it made me to remember it from school, but just googled and it is from latin cuniculus. I am learning many languages with EO!

They should accept "like" for ami. Esperanto "ami" covers liking and loving. "Mi amas vin" is not necessarily anything stronger than "I love you" (as in French, Je t'aime). Although apparently under the influence of English, there is an increasing reluctance to use ami for "like", between humans, at least.

In Esperanto, there is a difference.

And the Irish coinín, "rabbit".

I brought this up at our bi weekly Esperanto meeting (Montreal)..... One member said "What do you pull out of a hat... A rabbit, not a bunny." And I replied "How many chocolate Easter rabbits have you eaten." I think both Rabbit and Bunny would be correct as they refer to the same idea... An adult "Leporidae" in Latin or "Kuniklo" in Esperanto. Good thing there's only one word for this creature in Esperanto :-D

I had "Delicious" and "Chocolate" as possible plugins.

I should have done it.

Because they are very tasty

I had this same sentence three times in one lesson. Repetition ought to have its limits