Translation:A crocodile is not an alligator.

To make it clear: in the Esperanto movement "krokodilo" means a person who speaks a native language among other esperantists or a language that not everybody can understand. There is also a verb for this - "krokodili".

Of course "krokodilo" and "aligatoro" can refer to the animals as well.

so this has a sorta inside meaning. 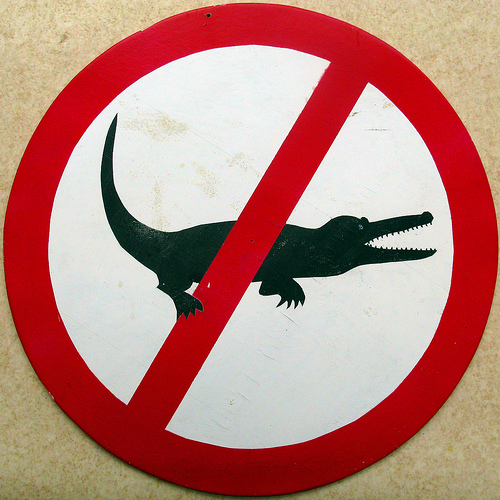 Out of curiosity, is this a term of hate or dislike? I ask purely out of wanting to understand better. If I were, to say, speak English for a few moments, would this be a slur of dislike towards me, or a general nickname. Thank you!

Could be seen as both. I think usually it's more of a general nickname, though. And the verb (krokodili) is actually quite useful sometimes :D

So all people taking these course are, in a way, either alligatoro or krokodilo...hm!Make sense to me.

Only if we are speaking another language in Esperanto forums, like we are doing right now. Mi estas nuntempe aligatoro. ;)

Well, not really, this is a forum for english speakers learning esperanto, so it doesn't properly fit the description: everyone speaks english here

Is it restricted to esperantists? Could I use it to refer to a non-Esperantist person?

Probably, but calling someone a crocodile for speaking something else on a English conference would probably require you to explain it.

Also, there's a third version of these, the verb "kajmani", which means to speak in a language that no one else is able to understand. This one definitely carries a sense of dislike too.

Finally, someone acknowledges this!

"Alligator" is an English corruption of the Spanish "El Lagarto" meaning "The lizard." So when one says "the alligator" in English, it's sort of saying "The the lizard." But the mistake became canonized, and has now been added into Esperanto!

It isn't a "corruption" or a "mistake", it's just the natural evolution of language at work.

I think when people use the term "corruption" in a linguistic sense, it's not to denote that the change is bad, just that a change came about somewhere along the line, usually due to human error or mistakes.

I don't know for certain whether or not the word "alligator" came about as a mistake, though, or whether it is just a result of natural evolution.

Just to add something: In Spanish, "el lagarto" is not just a lizard, it's a big "lizard" like crocodiles, caimans and varans. A closer translation of "the lizard" is "la lagartija" (small to medium size Squamata).

As an Australian I love this sentence!

As a native speaker of Korean, I still do not understand the key difference between the two. Korean language has only one word for them which is "악어". Can anybody explain this difference for me?

Aligators have the eyes closer and taller while crocs have a more flatter head. I believe crocs have a stronger bite, so I fear them more, but wouldn't survive any of them anyway. In Brazil we do have different words and I think one of them is native here, but as a cityboy who never saw any out of the zoo, I would take my words with more than a grain of salt.

I don't even know how to spell these in english and now I have to learn it in Esperanto!

I keep having to check the spelling XD

I was shocked how many times I spelt crocodille wrong. Probably misspelt it again lol

It's aligator with me. I keep getting corrected XD ... I also feel like I spelt it wrong again...

And the beginners who hardly speak Esperanto among fluently good speaking esperantists should be called "kokidoj". When they speak Esperanton with their extremly weak voices, one could ask them "Kion vi kokidas ?" (it's my case)