Translation:I think about firemen all day.

Nice to know the admins have their priorities in check XD 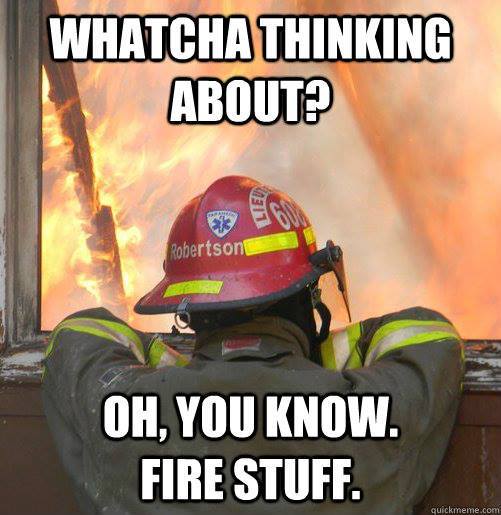 probably by posting the image address or something, idk really

I am so not getting that sentence out of my head now! :D

Ha, so does my 2 year old son! Actually, I think he just thinks about their truck.

Must be a good calendar.

kan det være 'i've been thinking about firemen all day'?

That would be the translation for the present perfect version of the sentence:

"Jeg har tenkt på brannmenn hele dagen."
"I have been thinking about firemen all day."

If "Jeg har tenkt" is "I have been thinking", then what is the equivalent for "I have thought"

It's the same, as we don't operate with separate continuous tenses in Norwegian.

I can't understand why 'hele dagen'. I'd expect it to be 'den hele dagen' or 'hele dager'. Why it has such form?

It's an exception. "Den/det" is omitted before "hele" and "halve".

Thanks a lot! It makes sense now

Because that's the way you say "to think about" in Norwegian, i.e. "å tenke på".

I love this course.

i'm a little bit confused about the exception to the rule with "hel." if it comes before a definite singular noun, is it always going to be "hele" even when there is no "den"?

In the Duo exercise above, you don't mean, "for a whole day", which would be using the word adjectivally. You mean, "for the whole of a day", which is using it as a determiner.

When used as a determiner, it's "hele". And this sort of word is also used before other determiners.

The whole of the sad day.
Hele den triste dagen.

You're right, I am confused. So as an adjective, it follows the hel/helt/hele rule. As an adverb, it is always in the neuter form. And as an determiner, it is always in the plural/definite form? But no, I don't really see how "for a whole day" is different than "for the whole of a day." Maybe I will understand it better when I am more advanced in my study. How would you amend this sentence (about the brannmann) to change "hel" into an adjective? And into an adverb?

But no, I don't really see how "for a whole day" is different than "for the whole of a day."

I'm not sure I can explain it much better, but consider:

"You can be rostered on for whole days or half days" uses the words adjectivally. I could as easily have written "sad days" or "sun-filled days". I'm just describing a noun. However, when I say, "the whole of a whole day", the first whole, in Norwegian, doesn't attach a quality to a noun. Rather, it says how much of that noun I'm talking about.

Another example of an adjective use:

How would you amend this sentence (about the brannmann) to change "hel" into an adjective? And into an adverb?

You can't really amend the sentence. The meaning is talking about the extent of the noun "day". You're not describing a quality that the day possesses.

OK. So when is "hel" an adjective? Is it never, because it always pertains to quantity? I cannot think of a time when "whole" would be a descriptor, not a determiner.

i don't see a difference between of and about, but firemen is plural here.

In English, it is incorrect to say "firemen" even when specifically meaning males. The people who put out fires prefer the term firefighter or first responder. They have never used "fireman/ firemen" to describe themselves.

i asked a similar question elsewhere: i am wondering whether Norway, too, has moved away from using patriarchal terms in the same way we in the US are trying to move away from them: congressperson, not congressman; firefighter, not fireman; mail carrier, not mailman; first-year, not freshman.

I also read that Sweden has a gender-neuter third-person singular term: hen. And also that some people in Norway use hin, but it's not widespread.

That confirms this course was written by a...