Translation:My brothers are playing with the moose. Good thing he rolled a Hunter ^.^

Lol Nice one ^.^ But I think taunt's a warrior move, right? xP Been too long for me to remember though. Yes, I'm a nerd. What's the Norsk word for that?

The pets of beast mastery hunters can taunt.

Feign death is hunter, but yeah taunt is either warrior, paladin, or monk, I think that's all of them

I don't remember, but couldn't the bear pet taunt? The Norwegian word for nerd is nerd, although it's pronounced with a distinct æ sound.

Is that the same chapter with "ulven spiser meg" in it?

This sounds as if their sister is answering while rolling her eyes.

I have seen moose up close, I think that the only way I'd play with one is from a safe distance, a real safe distance.

Maybe a half kilometer? More?

A møøse bit my sister once

As long as you don't try to Karve your initials øn a møøse with the sharpened end of an interspace tøøthbrush you should be pretty safe :)

such a moose apologist you are !

Moose are the most dangerous land animal in the north. They kill far more people than bears.

And they go where ever they want to. Even taking a lay down on a busy main street at lunchtime.

I knew this would be here. Thanks for affirming my faith in humanity.

BTW: I once drove an MG Sprite (or something, a very small car) under a moose. Do not do this intentionally.

Some girls play with Barbies...I played with moose...

Hopefully referring to a stuffed animal

I can't seem to embed pictures, so…
http://imgur.com/FUTwClT

You can embed pics using the following syntax without the spaces:
! [] ( https://i.imgur.com/FUTwClT.png?2 ) 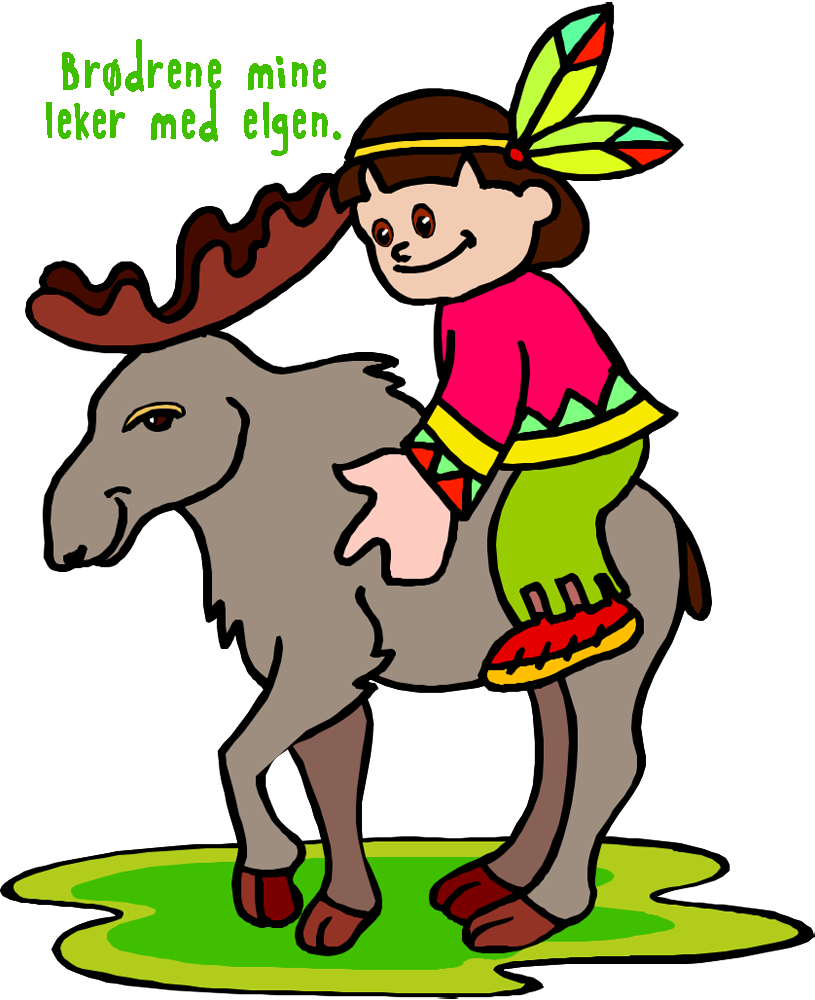 Did the moose eat the other brother?

Thanks for cartoon. 3May17

I really can't understand the last two words since they run together and sound like "melgen."

my guess is that since the sound of med ends in the starting sound of elgen (since med is more like meh) the two morph to make m'elgen, probably to make for simpler speech between the native speakers

I looked at your profile and HOW CAN YOU LEARN THAT MUCH LANGUAGES??? Wow, just wow.

Is this something they are now teaching in barnehager- how to play with moose?? They sure weren't when my daughter went. Geez, this is hard core.

The kids definitely don't have a helicopter mother.

A helicopter mom refers to a mom who is hovering over her children. I think that's what you were asking about.

I have to know if playing with a moose is a thing in Norway. No wonder vikings were such badasses

Is not 'elk' also correct - ? Wikipedia says it is, depending on which species you actually mean ...

Absolutely. The Eurasian elk (Alces alces alces) and the moose that live in North America (Alces alces americanus) are virtually indistinguishable. Be aware that North American elk (Cervus canadensis), also known as wapiti, aren't the same as Eurasian elk; in fact, Cervus canadensis don't exist in Europe. I've seen those referred to as wapitihjort. A Norwegian commented somewhere that they figured wapiti are close enough to red deer to be called hjort. However, among other differences, elk/wapiti are significantly larger than red deer.

For the first few months that I was doing Norwegian, I typed "elk" simply because it was shorter than "moose" and had no problem.

"Elgen" is definite and singular so it stands to reason that "the elk" would be accepted, but "elk" (without "the") would be incorrect.

I didn't quote the whole sentence, just the last word. I'll have to wait and see if Duo accepts 'elk'.

Why would anyone play with a moose?

They're good at parcheesi.

If squirrels can I can.

are playing or play is the same thing

I made a typo: plying instead of playing all other words were good, this should count

If a typo results in a real word, Duolingo usually considers it to be a mistake; "plying" is a real word, so it would have been marked wrong.

Hang in there, though ... there are more upsides than downsides!

Good luck for them |:x

That was my great grandfather's name. I never heard about any confusion.

Hmm, I guess it's just obvious when it's a name. Interesting.