Translation:No, one does not do that.

One does not simply walk into Mordor 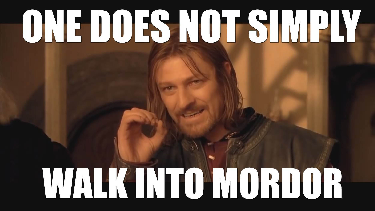 Is this the kind of impersonal structure you might use to give rules? Like speaking to a pupil at school, telling them what people/pupils in the school can and can't do.

Is this "man" equivalent to the impersonal "man" in German?

Does "No, nobody does that" work?

Is there a difference in pronouncing 'gjør' and 'jør'

What is this supposed to even mean?

It means, ''nobody does that''

It is sort of like "One does not write Norwegian in Chinese characters." It sounds faintly British to my ears.

Except there isn't a double negative in this translation due to the comma. If it was "No one does not do that" then yes, it would be a double negative and incorrect. With the comma, it is equivalent to "no, no one does that" or "no, nodody does that". In this example it's like "no, [some]one does not do that". "one" refers to a single person of unknown or unspecified gender. If that makes any sense.

"No, one does not do that" is fully compatible with English, perhaps as a response to "Can one eat your pizza?" Of course, one must refer to the questioner, but it makes enough sense, right?

Does English have double negation???

Colloquially, yes - particularly in the southern US (it's also considered an uneducated thing to do).

I also don't think "man" is a negative (regarding your other comment), but I don't know for sure.

Hi, does anybody have an opinion on whether "man gjør det ikke" would be also correct/accepted?

"Ikke" generally goes after the verb so, if it's accepted, it would be stressing "det" instead of "gjør," and implying that one does something else instead of "det." ("One doesn't do that!")

Could someone tell me the meaning of "man"? I don't understand what it means

"Man" means "one" but like saying "One cannot defeat the evil alone" so "one" referring to a singular person.

But nobody's gonna see this because it's way at the bottom. :(

How i read this at first: "multiplayer game one does not simply pause a"

"Ingen gjør det" means "Nobody does that." For example, watering a sidewalk to try to fix it. There's no point. It doesn't work, so nobody does it.

When you say, "One does not do that," it means people in general shouldn't do "that." It's a sentence that a parent or teacher might say to a child who has done something inappropriate or wrong.

Here are some examples:
One does not spit on the sidewalk. (It's inappropriate and dirty.)
One does not throw garbage out the window of a car. (It's littering and illegal.)
One does not hit classmates. (It's hurtful and doesn't solve problems.)

Can someone explain how to use "man"?

Tusen takk! That helped a lot!

Does this mean: No. No one does that, OR, One does do that ??? It doesn't work in English bc of double negatives so which one?

Its no, no one does that

No, its like no, nobody does that. Man is people in general

thank you very much

So why can't I just say "Nobody/ no one does that?" It failed me when I did. "No, one does not do that" is the same in English... am I missing something?

You missed the first word. If you had written,
"No, nobody does that," it would have been right.

Is this even proper English?

Yes, it most assuredly is proper English. :0)