Translation:You are afraid of going alone.

shouldn't it be "sole" instead? it looks like adverb.

Mi iras sola. = I am alone while going.

You could say "Vi timas iri sole." which would have a slightly different meaning. In the context of "iri" the difference is closed to neglectable.

Li dancas sole. = He's in a disco full of people on the crowded dancefloor dancing alone.

"Happy with my decision, I decided to leave it there."

It's true the adjective isn't acting in a way it normally does, but nonetheless, it still modifies the subject. Adverbs still modify the verb.

Adjectives modify nouns, so as an adjective, alone is modifying you, as it is you that is going alone. If it was an adverb, going would become modified, and it would no longer be you going alone but going while alone.

This explanation makes a lot of sense to me. Thanks.

Maybe that's a grammar feature of Esperanto, that you don't know from your other languages.

both, but it is better to use sola, since it describes the subject.

Sola - You are alone while going. you don't have a partner. It describes you, not the action. It is an adjective. It equals "solo" in Spanish

Sole - You are going alone. But it also means that you are just, solely, only, uniquely going. It is an adverb. It equals "sólo" and "solamente" in Spanish. NOTE: Sole is often a synonym of "nur" in Esperanto, which only means just, only and exclusively. Nur doesn't mean alone, while sole apparently does.

I posted "Cxu "sole" kaj "nur" estas sinonimoj?" in a facebook esperanto group and this person facebook.com/csy.mun.7 commented this:

I don't get it. "Mi iras sola" doesn't contain the fact that "I am alone". It's more like "I alone", which doesn't make sense.

Estas is not the only verb that can connect a subject with a description of that subject.

It's dangerous to go alone. Take this.

Where does 'timas' come from?

In English, the cognate is "timid".

It comes from latin, timeo.

What's the difference between timi and timiĝi?

Timi - to be scared 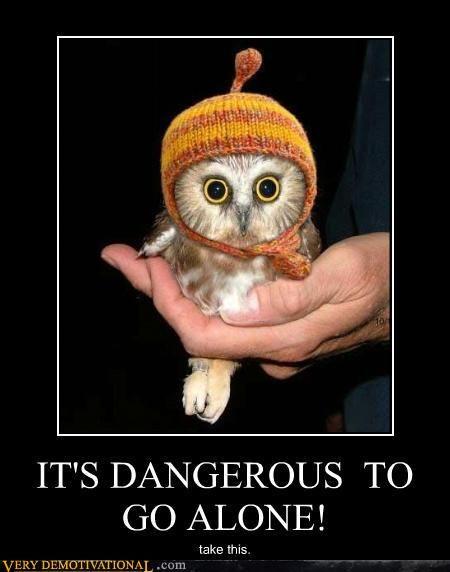 It might be "ĉi tiun" in this case since we're referring to a specific object. Not 100% sure though.

It's an abstract concept.

Could you also just say "tion"?

This sentence is terrifying.

Not sure why it was marked as incorrect. I have the same answer as the "correct" one. However, I can't state that my answer was correct when I click on the "Report a problem" button.

Why not "You scare to go alone"? Reporting it but I might be wrong which is why I'm asking...

It's not natural English; while it is possible to use "scare" intransitively, I've only ever heard it as part of the phrase "to scare easily". Usually, someone seeing "You scare" would expect an object to follow, something being scared by you.

Into that house that we heard of before? I would be too.

I had a little trouble with this one because of the form used for "going" -- it was my (possibly mistaken) understanding that the verb-ending particle "-i" indicated an infinitive, and I almost translated this as, "you are afraid to go alone." Since this was not an option, I went with "going", although it was my understanding (as above) that this would have been written, "iras". While I understand the value of presenting the language with all of its nuances as a native learner would encounter it (albeit, as a child), I am still taken aback by the confusion this leads to some times. Thank you for listening.

To any future reader of this thread, this question was asked in Feb/March 2021. The same user asked similar questions in other threads and has a received a few answers. Hopefully at least one of them was helpful.

If you have a similar question, I would encourage you to start a new comment (not a reply to this one) and ask your question as completely as possible.