Four weeks have passed, and we are now as many learners as

Moss! This city and municipality lies in the county Østfold, on the eastern bank of Oslofjorden. It has a population of about 31,000, and its coat of arms displays a crow. 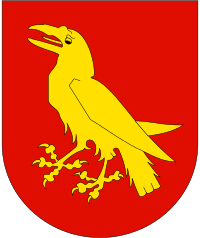 Contrary to what you might think from seeing that coat of arms, Norwegian crows are not yellow. In fact, they are grey and black, which might still be somewhat exotic if you are used to crows that are all black. Anyway, here is a picture of the ferry that crosses Oslofjorden between Moss and Horten.

Moss used to be renowned for a particular smell that would often be felt in the city, owing to the paper mills outside the city (not at all like the pleasant smell of moss you feel on a walk in the forest). The mills closed down some years ago, so the city has now been freed from mosselukta. The area where the paper mill lay was previously an iron mill, and also the location for the signing of an agreement that laid the foundation for the union between Sweden and Norway from 1814 to 1905. It was signed in this building:

If you happen to visit Moss someday, you might want to try their local culinary specialty, pølse i vaffel. It is a hot dog where the bun has been replaced with a waffle! My friend has a show in which they waffle things, so I always share waffle-related things with them, and I just showed them pølse i vaffel. They said it's "the most beautiful thing I've ever seen." Miiiiiight be planning a trip to Moss now.

Sometime soon, thousands of Duolinguists will descend on Norway and woo everyone with their superb Norsk.

My girlfriend lives here, why did she never tell me about this glorious culinary creation?