Hi everyone! I’ve seen some people posting little lessons for languages (like Latin), so I thought I’d share with you what I’m finding out about the fascinating Inuktitut language! I’ve only recently begun to study Inuktitut and Greenlandic, but I’ll focus on the former today.

First, a little about the language. Inuktitut is an Inuit language and is linguistically categorised as being the Eskimo-Aleut family - this means it is related to such languages as Greenlandic, Aleut, Inupiaq, and Inuktun. Inuktitut is written with a set of syllabics, which are natively called qaniujaaqpait. The system of romanisation which I will be using here is called qaliujaaqpait. There are a lot of different Inuktitut dialects, spoken all across Canada. The one I am mostly learning is the South Qikiqtaaluk dialect.

Inuktitut is also very different to most European languages - I just assume that most people here have knowledge in one or more languages from Europe. So in order to learn Inuktitut, you really do have to change how you think about things!

What I’ll show you today:

Disclaimer! I’m only a learner, too, so although I’ve tried I can’t guarantee there won’t be little mistakes. But you’ll still get the gist!

Note: I had no idea this was going to be long, but once I started typing... sorry!

Words in Inuktitut are generally made up of roots and affixes. A root is a basic word form - such as isiq, to enter, and an affix is a word or grammatical marker which joins to the root to add a new layer of meaning. A good way to introduce this system is through some simple verbs! Here are some singular Inuktitut subject affixes, which are attached to verbs:

Personal pronouns as they are seen in many European languages - standalone words such as I, io, jeg, and so on, are not often used in Inuktitut. This is because the above affixes, which get attached to verbs, serve the same purpose - the verbs themselves agree with the subject, making separate pronouns pretty much redundant.

To form a verb in the present tense, all that’s needed is to find the root of the verb you are going to use, and use the appropriate form of a subject affix. Here are some basic verbs:

When a stem ends in a vowel, the subject affix used begins with j, like the ones I’ve already shown you. Therefore, it’s not very difficult to create a “full” verb from niri -

nirijuq - he eats, she eats

However, if a stem ends in a consonant, then the j becomes a t. So uqalimaaqjunga, titiraqjutit, and sinikjuq are all incorrect:

siniktuq - he sleeps, she sleeps

When affixes are added, many change their initial letters or even alter the stem they attach to. This is important to remember, as these spelling changes may make it difficult to pick out affixes and roots from words.

Keeping to the topic of verbs, one equivalent of the verb to be is the affix -u-. It is often used with personal names to say who somebody is, along with the appropriate subject marker. In foreign names, the -u- affix can actually be left out, as some speakers find it improves pronunciation. :)

Take note of the second versions of the last two names - subject persons start with j before vowels and t before consonants!

There are a few rules to remember for -u-, however.

If -u- is attached to a stem ending in a k or q, that final k/q is deleted.

As a rule of thumb, no more than two vowels can be consecutive. Therefore, when a stem-final k/q is removed but is immediately preceded by two vowels, the -u- affix would mean there would be three vowels in a row: therefore, it is changed to -ngu-.

Let’s learn some more “pronouns”. In Inuktitut, there are three person numbers: singular, dual, and plural.

This means that uqalimaaqtuguk means 'we (two) read’, while uqalimaaqtugut means ‘we (three or more) read’. The second and third person dual and plurals are as follows:

Given these new subject affixes, and the verbs I showed you at the start, can you figure out what these words mean?:

A similar set of affixes are also used to create simple questions. Here they are below, with their corresponding subjects:

As with the subjects’ j to t rule, there are just a few spelling rules to remember here, too.

To answer in the affirmative, say ii, or the verb plus the first person singular affix. Expressing the negative can be done by saying aagga, but if you want to be fancy, you can use a negative affix. The affix -nngit- is added before the verb subject. If -nngit- directly follows a q, k or t, that letter is deleted.

And that’s the end of that! Now you know:

the subject affixes, which correspond to personal pronouns

how to turn a present-tense verb into a simple question

how to say someone’s same

To finish, here’s a little conversation. Try and read it through! Can you see how to ask someone’s name?

I have found Inuktitut to be a fascinating language for a long time now. Thanks for this nice post! I hope to be able to learn at least some of the Inuktitut language and other Aboriginal languages in the future.

Here's a good TED talk if anyone is interested, called "What if Aboriginal languages mattered?" by Dr. John Steckley: https://www.youtube.com/watch?v=Q50ZJWc1uyE

Thank you very much, I would like to watch this. I attended a great talk by a First Nations Chief at my University last year. I think this can tie in to that very nicely.

That sounds fascinating! What sort of topics were covered in the talk? I'd love to attend something like that :)

Here is a summary of some of the topics he discussed:

That came out a bit longer than I though it would. Maybe I can expand this a bit and make a post in the future.

I've saved this to watch later, it sounds very interesting! Aboriginal and minority native languages are a huge interest of mine, I really wish people had more exposure to them. Thanks for the link!

I skimmed it in a minute, but I've got to say this is some good work. Nice job! 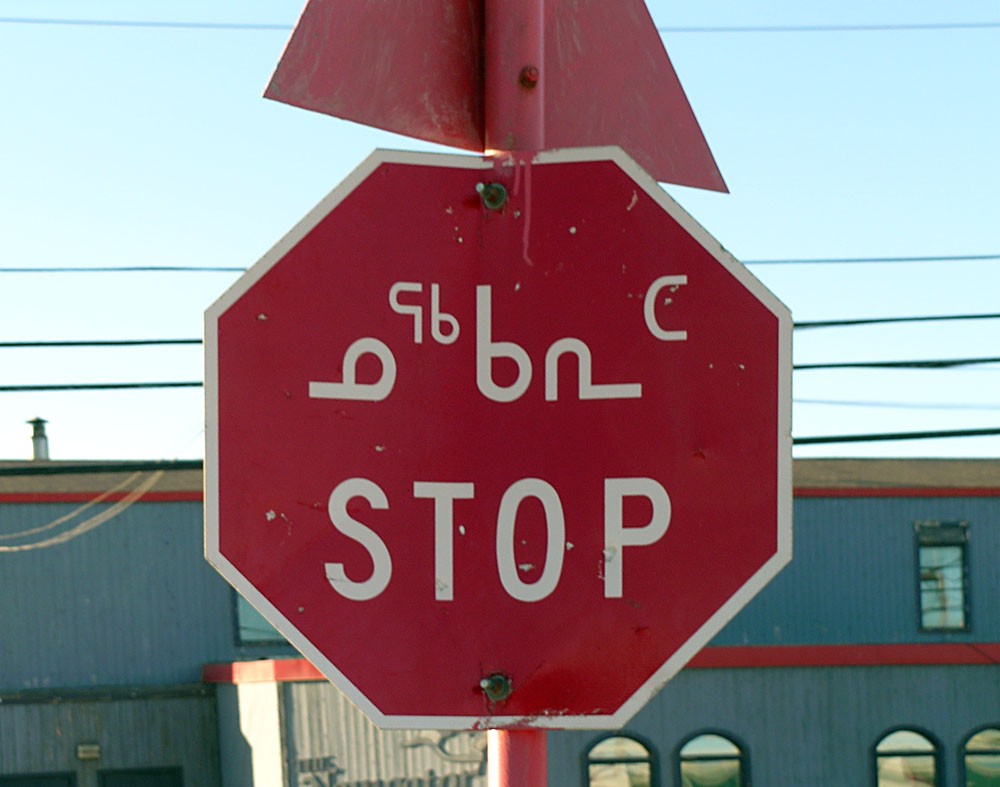 Reminds me of the stop signs I have at home in Québec!

Thank you! I'm glad you liked it, I'm hoping that it can get some people interested in the language :)

Cool! It's nice to see someone teaching a language that not many people know of.

Thanks! That's why I wanted to post something about it, it's an interesting language and it's very sad that languages with a relatively small amount of speakers are often ignored... having few speakers makes a language no less fascinating or fulfilling to study, in my opinion!

I agree. And Inuktitut is very interesting, both in a grammatical sense and a cultural sense. Will you ever be teaching the Inuktitut writing system?

I'd like to, but the resources I'm using currently only occasionally use the syllabary, so in my notes I've had to do my best at figuring it out on my own. I'm mostly confident I've got the script down, but I still need to practice some letter combinations (such as consonant clusters, doubled consonants or syllable-final consonants) a little more.

Totally cool! The concept of root+affix is very much like Hungarian. The changing of the -j in subject affixes to -t in consonant-ending stems is also familiar. Affixes in Hungarian also change, but it's the vowels that change to match the vowels in the stems, and is called "vowel harmony". The thing that is really new and surprising for me is the idea of a "dual pronoun"! I've never encountered this before. It's so interesting!

One comment: You said, "As a rule of thumb, no more than two vowels can be consecutive. Therefore, when a stem-final k/q is removed but is immediately preceded by two vowels, the -u- affix would mean there would be three consonants in a row: therefore, it is changed to -ngu-." I think you meant, "there would be three vowels in a row"?

One question: How is -q pronounced? Is it just a -k sound? Or is it some sort of glottal stop sound? It seems to be used a lot.

Ok, and now I'll take a stab at the first "exercise": nirijuuk = The two of them eat. nirijusi = You (pl.) eat. Siniktuguk = The two of us sleep. titiraqtut = They write. titiraqtugut = We write. uqalimaaqtutit = You (sing.) read. siniktunga = I sleep.

And that's as far as I got before my brain got saturated with new language overload!

Whoops, you're completely right - I didn't even notice I had written "consonants" instead of "vowels", thanks! (I'll correct it now - but that's what I get for making posts at midnight!)

Q is a 'voiceless uvular plosive', which is represented by the symbol /q/ in the International Phonetic Alphabet. If you want, this page: http://web.uvic.ca/ling/resources/ipa/charts/IPAlab/IPAlab.htm has some of the most common IPA symbols, plus audio! I've found it really helpful when learning how to pronounce things.

Also, R is pronounced as /ʁ/, which is a 'voiced uvular fricative', and J is /j/, a 'voiced palatal approximant'.

And you definitely seem to have a flair for Inuktitut... let's hope I can convert someone to being a fan of this beautiful language :D

Hmm... well I've always had a fascination with aboriginal people, not just in Canada but globally, but I've never delved into this interest in any substantial way. Maybe I've found my calling with Inuktitut ;) You've definitely piqued my interest in the language with this little crash course, thank you for introducing us to it!

Also, another question: what does "inuk" mean, and what does the "titut" affix do?

Inuk means "person". I don't know the exact etymology of Inuktitut but apparently it translates to "like the Inuit". Inuit is the plural form of "person" - replacing the final consonant with -it is one way of forming the plural.

I'd assume that in this context, titut would therefore convey some meaning such as "similar to". This affix is also present in words such as inuttituuqpuq (he/she speaks or behaves like an Inuit person), which is a possible derivation of inuttitut, an alternative spelling conveying the meaning of "Inuit-like". However, the only words I've come across using this affix have been dialectical names for Inuktitut.

There are some words with a similar sort of meaning which may contain a form of the titut affix,, such as tiatut (what is like it, what is like that, that is like it), ippasamitut (like yesterday), uqautijarnituq (someone it's nice to talk to). But unfortunately I can't say whether this is a coincidence or not.

-titut is the plural form of the noun case which means "in the manner of" or "like".

So "Inuktitut" means "Like Inuit" or "In the Inuit way"

The singular form of this case is "-tut", like in "Inuktut", a variant of Inuktitut spoken in Labrador.

Thank you! I'm going to have to re-read this when I'm less tired, but it's really nicely done :)

Thank you for your kind words! I'm glad that people seem interested in this wonderful language :) I would really recommend it to anybody who's interested in languages!

The syllabary used is cool, too :)

I know, I love it! The only reason I haven't used it here is that I know I still make lots of mistakes, particularly with doubled and syllable-final consonants. Hopefully I'll post something with the syllabary later :) Have you studied Inuktitut?

I had a brief glance :) Although I'm trying to focus on Amharic!